The Song of the Line - Drawings from five decades 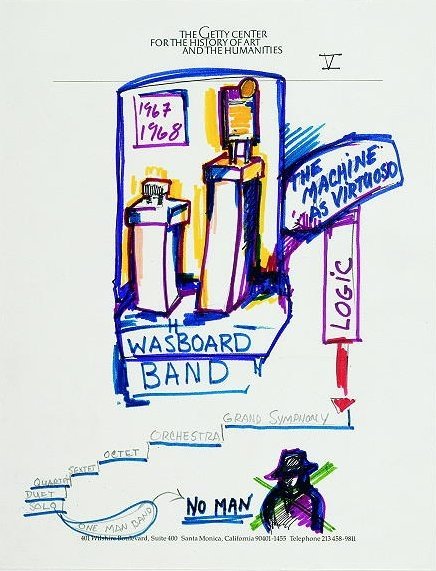 Curator Dr. Marvin Altner The artist Stephan von Huene (1932–2000) famous for his construction of intriguing sound sculptures, was also an exceptionally draughtsman. The exhibition The Song of the Line for the first time offers a survey of the entire oeuvre of his drawings. Drawings in pen and pencil that von Huene produced in California in the 1960s are evidence of the artist’s familiarity with the work of Pablo Picasso as well as with the sculptures of the native North American Kwakiutl tribes and the cartoon drawing of the Disney empire. The figures in von Huene’s early, consummately executed drawings throw open a pan-erotic cosmos of imagery replete with allusions to the mythological pictorial traditions of a wide range of cultures and eras.

Having, besides art, also studied art history, von Huene worked as a teacher from the early 1960s onwards, finally coming to settle in Hamburg in 1980 after a period as visiting professor at the Berlin University of the Arts (HdK). In Hamburg he developed the series ZEIT Collages, combining fragments from the ZEIT newspaper with drawings to pass analytical scrutiny on the body language of well-known politicians, writers and artists. These collages also resulted from wide-ranging studies of American communication theories which were central to von Huene’s views on art and its social functions.

With the so-called Mind Maps he developed in the 1980s von Huene extended the genre of word images. These circuit diagrams of memory also allowed him to link his sound sculptures into scientific contexts. In the 1990s this technically versatile artist then turned his attention to computer-assisted drawing. A selection of sketches and studies from the everyday realms of his work, life and university round up this comprehensive exhibition of von Huene’s works on paper.

The exhibition is accompanied by a catalogue published by Hatje Canzt Verlag.