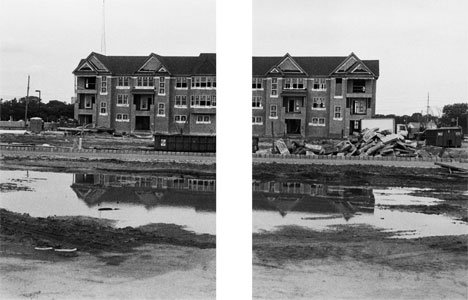 curated by Andrea Inselmann, curator of modern and contemporary art at the Johnson Museum

The Herbert F. Johnson Museum of Art at Cornell University presents Michael Ashkin, the artist’s first solo museum show to bring together works in the wide variety of media that spans his artistic practice. Ashkin is currently an assistant professor and the director of graduate studies in Cornell’s College of Architecture, Art, and Planning’s Department of Art.

Ashkin’s large-scale installation, Untitled (where each new sunrise promises only the continuation of yesterday)… (2008–10), explores the logic of urban spatial organization. The sprawling city, rather than revealing a sense of urban planning, looks unintentional, temporary, characterized by an absence of community. Based on abstractions from aerial photos and drawing on assocations with surveillance, video games, and warfare, the miniatures lack a specific identity in space or time, amplified by the monochrome recycled cardboard material. Ashkin directs our gaze, never allowing a close-up examination.

The photographic series (Long Branch) (2002–10) addresses territorial issues more directly. Ten digital prints seem to document the New Jersey beach neighborhood embroiled in eminent-domain issues for over a decade. But upon closer inspection, interventions become apparent: by either cutting negatives or pairing askewed views, Ashkin has produced a series of images that do not allow for a stable viewing position. The many layers of information in this conflict are further expressed in a printed piece combining the photographs with quotes from online, real estate brochures, and newspaper articles, with writings by the artist as yet another voice among many.

The video Here (2009), a gallery installation, combines the grainy, flickering image of an empty room with a voiceover by the artist about an unnamed desert. Filmed at a decommissioned military depot in upstate New York, Here lacks temporal and spatial coordinates, making it a virtual extension of the sculptural installation. Projected onto the façade of the Museum, the video Centralia (2009) takes its name from a central Pennsylvania mining town, where coal deposits have been burning since 1962, causing major environmental problems. Ashkin directs our attention to an ongoing mining operation nearby, emphasizing layers of disappearance and absence in the process of history.

Alongside two of his well-known miniature scale models from the 1990s depicting marginalized landscapes is Ashkin’s most recent project, Wall (Western Sahara) (2010), a wall-mounted frieze-like piece that uses aerial abstractions based on images from Google Earth of the Moroccan Wall. While this immense structure is already abstracted through its representation online, Ashkin adds another layer of alienation by presenting a fragment of the actual 865-foot piece.

Ashkin’s work has been shown widely, including in Documenta 11 in 2002 and the Whitney Biennial in 1997. Recently it was the subject of a solo show at Secession in Vienna and the Weatherspoon Art Museum, University of North Carolina. In 2009, Ashkin received a fellowship from the Guggenheim Memorial Foundation. This year, his work will be included in shows in Stuttgart, Valencia, and Bludenz.

The artist texts in the show are available on http://www.michaelashkin.com

The exhibition was supported by a grant from the Cornell Council for the Arts.

Thursday, April 22, 12:00 noon–1:00 p.m.
ART FOR LUNCH
Visiting lecturer and scholar Anthony Graves will lead a tour of the exhibition.

Nature Observed and Imagined: 500 Years of Chinese Painting
April 10-June 13
From theoretical landscapes to direct observations, this exhibition explores the evolution of Chinese artists’ approaches to depicting the natural world in the Yuan, Ming, and Qing dynasties. The exhibition includes major loans from private collections side by side with the Johnson’s own fine collection of Chinese painting to present treasures by many of China’s great master painters.


Bodies Unbound: The Classical and Grotesque
April 10-July 18
This exhibition, curated by the seventeen undergraduate members of Cornell’s History of Art Majors’ Society, will explore fundamental details in European and American visual culture and fine art from a wide historical breadth, examining the "classical" and "grotesque" as stylistic and formal qualities, theories, and sociopolitical tools and texts. With visual and theoretical juxtapositions, putting particular emphasis where the two terms overlap, images of the body are presented to explore iconic as well as strange representations of the human figure. This exhibition is funded in part by a grant from the Cornell Council for the Arts and a generous gift from Betsey and Alan Harris.