The beauty of distance: Songs of Survival in a Precarious Age. Recent and new works by Australian artists will be showcased alongside international artists at Sydney's leading cultural institutions, contemporary art spaces and heritage sites. Artist talks, performances, forums, film screenings, and other special events will be featured throughout the Biennale exhibition period. Artists' works will be presented alongside the work of contemporary writers, filmmakers, and musicians. Artistic Director: David Elliott. 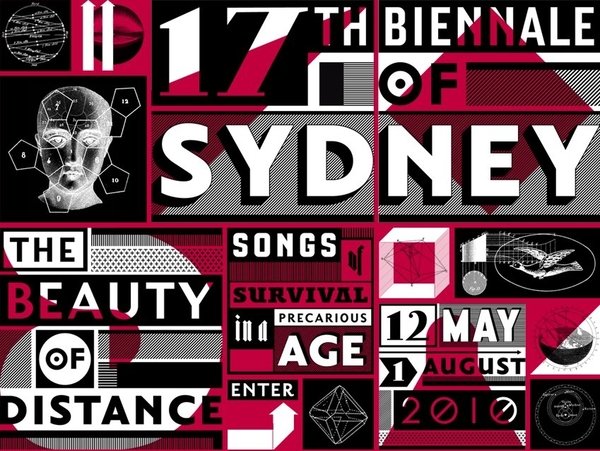 Based on the curatorial theme THE BEAUTY OF DISTANCE: Songs of Survival in a Precarious Age, recent and new works by Australian artists will be showcased alongside international artists at Sydney's leading cultural institutions, contemporary art spaces and heritage sites.

Marah Braye, Chief Executive Officer, Biennale of Sydney, remarks: 'In 2010, the Biennale celebrates its 37th anniversary, making it the third longest running biennale in the world. We anticipate building on our record attendance from 2008 and expect to welcome more visitors than ever before to this spectacular free event.' Audiences of all ages will be delighted, challenged and inspired by the artists and works in this Biennale. Visitors can walk from venue to venue along Sydney Harbour's edge and then take the free ferry to Cockatoo Island.
Artist talks, performances, forums, film screenings, family events, guided tours and other special events will be featured throughout the 17th Biennale exhibition period.

David Elliott, international curator, writer, broadcaster and museum director, explores connections between the visual arts and other art forms in 'THE BEAUTY OF DISTANCE'. Artists' works will be presented alongside the work of contemporary writers, filmmakers, commentators and musicians. Some projects will be displayed at venues for the duration of the exhibition; others will be one-off events and performances.

Elliott says: 'I'm very excited to be presenting the 17th Biennale of Sydney. The aim of this Biennale is to bring together work from diverse cultures, at the same time, on the equal playing field of contemporary art, where no culture can assume superiority over any other.'

Elliott has constructed 'THE BEAUTY OF DISTANCE' with Sydney's position as an iconic modern world city in mind and believes biennales should enter into conversation with the places where they are shown. 'This exhibition has been designed specifically for Sydney and, equally, would stand up well in any international city,' he explains.

Cockatoo Island returns as a major exhibition venue in 2010, building on the success of its inaugural use for the 16th Biennale of Sydney (2008). The venue will feature works by approximately 50 artists spread throughout the island's cavernous structures and open spaces. The island will feature many new site-specific works, created directly in response to the location. Elliott says: 'Cockatoo Island is historically significant as both a prison and an industrial powerhouse; it offers a variety and vastness of space, which is a fantastic challenge and privilege for artists. It is one of the unique environments of Sydney and we will be filling it with art.'

A major installation piece by Chinese-born, New York-based artist Cai Guo-Qiang will dominate Cockatoo Island's vast Turbine Hall. In Inopportune: Stage One (2004), a nine-car installation represents an exploding series of cars rotating through space. Cai's work meditates on the beauty and horror of destruction, as well as terrorism and the current 'war' against it.

A major installation by Japanese artist Hiroshi Sugimoto will be seen for the first time in Cockatoo Island's abandoned Power House. A rising structure built in the centre of the space houses a series of light boxes showing beautiful abstract images that are, in fact, photographs of instants of electrical discharge. At the very summit of the structure presides a thirteenth-century Japanese sculpture of Raijin, the powerful God of Thunder and Lightning.

As the exhibition subtitle 'Songs of Survival in a Precarious Age' implies, many of the artworks incorporate a musical element. In Cockatoo Prison (2010), the Tiger Lillies will premiere their new 'post-punk' neo-Brechtian opera about crimes and society's attitude towards them, performed on location at Cockatoo Island.

Moscow-based group AES+F examine the colonial heritage of globalisation with an animated panorama, The Feast of Trimalchio (2009). Set against a pumping Beethoven soundtrack, the work presents a satire on Roman decadence, depicting a colourful 'multicultural' fantasy set in a luxurious multinational hotel. AES+F reflect on how the wealthy West controls the world's resources, and show that everything is up for sale.

Isaac Julien presents a major new multi-screen film work, TEN THOUSAND WAVES (Better Life) (2010), which explores the cultural complexities and emotional baggage of diaspora and migration through a story told of Chinese immigrants living and working in the United Kingdom.

Australian Brook Andrew presents Jumping Castle War Memorial (2010), a large inflatable structure with a heroic figure at its core, decorated with a pattern based on Wiradjuri design. Despite appearances, this is not a playground for children and visitors over the age of 16 years will be asked to consider the significance of their actions if they wish to enter the space.

The Museum of Contemporary Art (MCA) will devote its entire gallery space to the Biennale of Sydney for the first time. German artist John Bock's film features wild, dandyish Rococo costumes, bizarrely fabricated machines and stream-of-consciousness mutterings that raise questions about the dark side of the Age of Enlightenment.

Artspace will become the home of SuperDeluxe, one of Tokyo's leading alternative spaces for experimental music, culture and ideas. SuperDeluxe@Artspace is at once a performance venue, art gallery, bar and club, featuring a sensational line-up of Japanese performers, improvised collaborations with local artists and PechaKucha nights.

PechaKucha, the Japanese term for 'chit chat', invites artists, designers, architects and other inspiring creatives to make presentations on any topic of 20 slides, each for 20 seconds. A call for PechaKucha participants will take place in March.

The Sydney Opera House, which shares the Biennale's 37th anniversary in 2010, will host an ephemeral work by New York-based Chinese artist Jennifer Wen Ma. This new work is the development of an idea initially devised for the 2008 Beijing Olympics Opening Ceremony in which an animated image of the Monkey King, a popular figure in Chinese mythology, is projected onto a large cloud in the sky.

The steps of the Opera House will host performances by Mieskuoro Huutajat (Shouting Men's Choir), a group from Oulu in northern Finland who literally shout their lyrics. The group's repertoire includes radical presentations of workers' songs, children's nursery rhymes and national anthems. Enacted with precision and harmony, Mieskuoro Huutajat's offerings are a parody of discipline and male power, suffused with a taste for the absurd. For Sydney, they will turn their attention to Australian history and politics.

Australian artist Fiona Hall will create a new work for the Royal Botanic Gardens – The Barbarians at the Gate (2010) – consisting of 20 beehives painted in the camouflage patterns of various countries around the world.

The Art Gallery of New South Wales, due to gallery renovations, participates as a supporting venue in 2010 exhibiting Biennale works in the Grand Court. Japanese artist Hisashi Tenmyouya will present a triptych showing Kannon, the god of compassion, and two guardians, painted in a traditional thirteenth-century style but with an aggressively contemporary twist, whilst Wang Qingsong's large photographic tableaux provides a window into Chinese-style capitalism at a time of both boom and bust.

The 17th Biennale of Sydney will be dedicated to the life and continuing influence of Nick Waterlow OAM and the Biennale's keynote address from hereon will be named in Nick Waterlow's memory.

A dedicated media centre will be provided in the lobby of the Sofitel Sydney Wentworth Hotel during Opening Week.

VENUES
The Biennale of Sydney venues combine established and high-profile museums, dedicated contemporary art spaces, heritage sites and buildings, as well as outdoor city areas. In 2010, the 17th Biennale of Sydney will be situated across the heart of the city in a series of venues: Cockatoo Island, Pier 2/3, the Museum of Contemporary Art, Sydney Opera House, Royal Botanic Gardens, Artspace and the Art Gallery of New South Wales (Grand Court).