The show presents video installations, drawings, sculptures and photographs by six Rotterdam-based artists whose work does not avoid the inexplicable and unfathomable. Enigma offers a view of a complex, fanciful world without the foothold of logic. In the first decade of the twenty-first century, 'unknown terrain' is increasingly difficult to find. Works by Lorenzo Casali, Martina Florians, Marcha van den Hurk, Juul Kraijer, Joris Kuipers, Lieke Snellen. 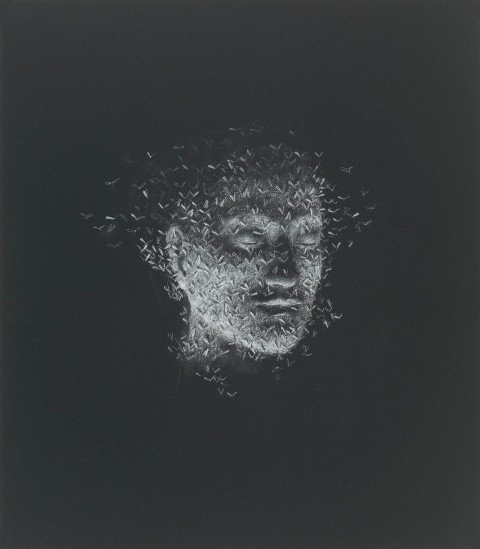 From 29 April to 27 June, TENT. presents video installations, drawings, sculptures and photographs by six Rotterdam-based artists whose work does not avoid the inexplicable and unfathomable. Enigma offers a view of a complex, fanciful world without the foothold of logic. In the first decade of the twenty-first century, ‘unknown terrain’ is increasingly difficult to find. Google leaves no part of the earth unobserved, no archive unopened and no theory unpublished. And still there must be moments, places and people, who avoid the assignment of meaning, that exist without us knowing them. Enigma is not an exhibition that provides answers, but which poses questions.

Lorenzo Casali’s video installations have an ephemeral character. Shadows and spots of light dance across a wall without ever forming a recognizable picture. These are images of unoccupied houses in the Rotterdam working-class district Crooswijk, where a large-scale restructuring project is underway. Casali filmed the light entering the space, which casts shadows in empty rooms, on abandoned furniture or flaking layers of plaster. They become shadows of a disappearing past.

The laboratory-like set-ups of Martina Florians often strike an absurdist tone. Florians is not engaged in science. Instead she uses objects, odours, liquids and humour to tells personal stories, or she offers solutions that are not solutions. Her installation in TENT. is based on an anecdote about a Slovak sausage maker, who creatively managed to evade the European regulations. Florians links together the cities of Brussels and Poprad (Slovakia) using letters and spices; the intense spicy odour raises the experience of Florians’ work to a sensory level.

The work of Marcha van den Hurk typically features vagrants, the anonymous figures that inhabit large cities. The vagrant, which incidentally is an important reference to the subconscious in Jungian psychology, leads a life that we do not know and do not want, but which we still long for from time to time. Non-conformist, independent and unpredictable, the vagrant withdraws from society. In Van den Hurk’s photographs and sculptures, the figure of the vagrant becomes an anonymous form, an object that stands midway between a human figure and a landscape element, between dreamed and real life.

Mysterious women, merged with nature, emerge from the paper in Juul Kraijer’s refined drawings. These are creatures of nature that escaped from mythology and which have their origins in art history and Indian miniatures. For some years now Kraijer has also been making ceramic sculptures and videos, a number of which are shown in the exhibition.

The spectacular cutout paper wall reliefs and drawings by Joris Kuipers appropriate so much space that the observer is absorbed by them, almost becoming part of them. A tangle of light-red forms appears to stream down the wall, has no beginning or end and only later does it refer to human organs, but as seen on MRI and CT scans. The game with size and scale and the uncontrolled growth of indefinable forms evokes a sensation in which fear of the unknown alternates with curiosity for the unknown.

After graduating from the Piet Zwart Institute (2007), Lieke Snellen’s artistic practice soon developed towards autonomous sculpture, in which questions on the basic principles of sculptural art and medium-specificity (referring to the well-known art critic Rosalind Krauss) play an important role. The material Snellen uses for her sculptures often derives from our everyday environment, but in her work it gives up its original meaning. The eventual sculpture presents itself as autonomous, free of any direct reference, coagulated in a precarious balance between the surreal and the realistic, the banal and the spectacular, the aesthetic and the conceptual.

Educational programme
To accompany the exhibition, TENT. is developing an extensive educational project in collaboration with participating artist Marcha van der Hurk. More than twenty secondary school classes from Rotterdam will work in the education studio in response to the exhibition.

Monday 10 May – 19.30 h: Lecture Dr. Marco Pasi, Assistant Professor for the History of Hermetic Philosphoy and Related Currents at the University of Amsterdam. He will talk about the esoteric and magical as sources of knowledge. The lecture is also part of the Office for the Unknown project curated by Alexis Vaillant at the Piet Zwart Institute/Willem de Kooning Academy in Rotterdam. TENT. i.c.w. Piet Zwart Institute. Location: Mauritsstraat 36, 3012 CJ Rotterdam.

Thursday 10 June 2010 - 20.00h: Who stole the Tarts?
Knowledge, research and debate appear increasingly to be the pillars supporting contemporary artistic practice. On this evening, artists present talks and performances in which traditional forms of knowledge transfer are examined and tested. With Deirdre Donoghue and Roxane Borujerdi a.o.