Pause:: Singing the Net. The artists will work in collaboration with local computer programmers and storytellers to create a new Internet navigation tool that will create stories through an automatic navigation of the Internet. 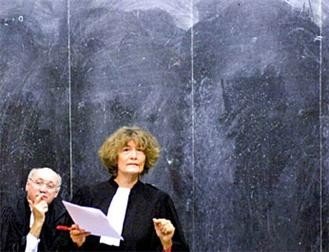 YBCA presents the US debut of French artists Patrick Bernier and Olive Martin in a new project, Singing the Net. Singing the Net centers on ideas of frontiers, movement and identity using the Internet’s unique territories, histories and identities as inspiration. Bernier and Martin are interested in how Internet navigation movement might be translated and captured in sound, text and video.

Singing the Net centers around New Kahnawaké / La Nouvelle Kahnawaké, an experimental documentary film created by Bernier and Martin. New Kahnawaké explores the 7 Sultans Casino, one of the three hundred online casinos hosted by servers located in Kahnawake, a small Native American reserve to the south of Montreal, Canada. For this project Bernier and Martin conducted a series of interviews with Kahnawake men and women, and incorporated elements of these interviews throughout the film. Bernier and Martin patterned the creation and editing of this film on the navigation system of an Internet browser’s history tool.

New Kahnawaké / La Nouvelle Kahnawaké is screened in fragmented parts throughout the gallery as a multichannel sculptural video installation. The film’s soundtrack, created by Bernier and Martin, also features recordings of Steve Bowerman, a professional auctioneer. Bowerman will also perform live musical interpretations during a public program held in conjunction with the exhibition.

This unique project is a collaboration between YBCA and the new French residency program, in San Francisco, of the Kadist Art Foundation.

Organized by visual arts adjunct curator Julio César Morales, the exhibition is presented as part of PAUSE: Practice and Exchange.

PAUSE: Practice and Exchange activates YBCA’s Gallery 3 by creating an exciting new series of process- based exhibitions with artists in residence from the Bay Area and around the world. These works include lectures, performances and workshops that transform the exhibition space into a fluid and active experience for audiences. Key components are cross-generational projects and multi-disciplinary collaborative artworks with a focus on influence, process and mentorship from both international and local artists. Artists are in residence for two weeks after the opening of their exhibition for talks and events.

Programming during the YBCA 09_10 season focuses on Imaginative Investigations of Promise and Possibility. Within this framework, YBCA explores new and renewed visions of our changing world through the lens of three Big Ideas. YBCA features artists and projects connected to Big Ideas—major themes that artists are exploring right now—as a way to help audiences better understand the work, recognize some connections and/or contradictions between artists and help understand how art relates to the world around us. The three Big Ideas during the 09_10 season are Heroes and Heroics, Bridging the Gap and Under the Influence.

Singing the Net is part of a series of artists presented by YBCA under the Big Idea Heroes and Heroics which features works of art that explore the heroic individual, the heroic idea and the search for someone or something that can bring order to the world around us and create the peace (and peace of mind) that we so desire.

The full list of public programs is as follows:

Discussion and Screening
May 15, 2-4pm
Gallery 3
Artists’ Talk
All public programs are free with gallery admission.