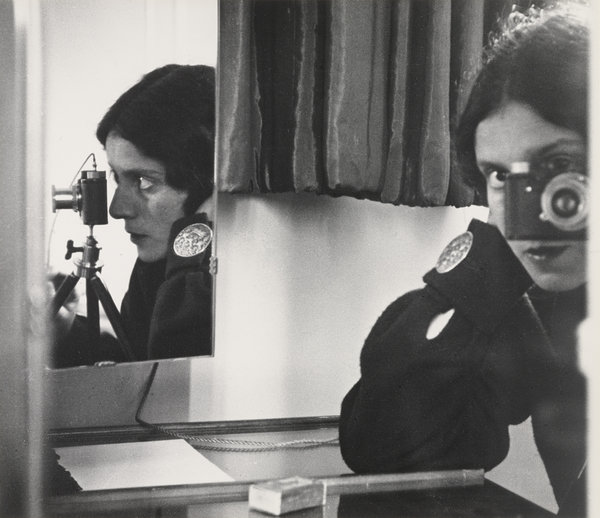 The Museum of Modern Art draws from its rich collection of photography to present the history of the medium from the dawn of the modern period to the present with the exhibition Pictures by Women: A History of Modern Photography, from May 7 to August 30, 2010. Filling the entire third-floor Edward Steichen Photography Galleries with photographs made exclusively by women artists, this installation comprises more than 200 works by approximately 120 artists, including a selection of exceptional recent acquisitions and works on view for the first time by such artists as Anna Atkins, Claude Cahun, Rineke Dijkstra, VALIE EXPORT, Nan Goldin, Helen Levitt, and Judith Joy Ross. The exhibition also includes masterworks by such luminaries as Berenice Abbott, Diane Arbus, Gertrude Käsebier, Dorothea Lange, Lisette Model, Tina Modotti, Cindy Sherman, and Carrie Mae Weems, as well as pictures, collages, video, and photography-based installations drawn from other curatorial departments by artists such as Hannah Höch, Barbara Kruger, Annette Messager, Yoko Ono, Lorna Simpson, Kiki Smith, and Hannah Wilke.

The Edward Steichen Photography Galleries comprise a circuit of six rooms devoted to a rotating selection of photographs from the Museum’s collection. The galleries featuring works from 1850 to the 1980s open on May 7, 2010, and remain on view through March 21, 2011. The most contemporary works in the exhibition are currently on view in The Robert and Joyce Menschel Gallery, and they remain on view through August 30, 2010.

For much of photography’s 170-year history, women have contributed to its development as both an art form and a means of communication, expanding its parameters by experimenting with every aspect of the medium.
Self-portraits and representations of women by a variety of women practitioners are a recurring motif, as seen in works by artists ranging from Julia Margaret Cameron to Lucia Moholy, and from Germaine Krull to Katy Grannan. Significant groups of works by individual photographers are highlighted within this chronological survey, including in-depth presentations of the work of Frances Benjamin Johnston, Käsebier, Modotti, Lange, Levitt, Arbus, Goldin, and Ross.

Marking the entrance to The Edward Steichen Photography Galleries is a large-scale photographic wallpaper, Fluxus Wallpaper, realized by Yoko Ono and George Maciunas in the early 1970s. This work depicts the serial repetition of a set of buttocks, an image originating from a provocative Fluxus film made by Ono in 1966.

Pictures by Women opens with a gallery of nineteenth– and early twentieth-century work, representing the variety of photography’s applications. The earliest photograph in the installation was made in the 1850s by British photographer Anna Atkins, who used the cyanotype process to record her many plant specimens. Presented side by side are in-depth groupings of work by American photographers Frances Benjamin Johnston and Gertrude Käsebier. In 1899 the Hampton Institute commissioned Johnston to take photographs at the school that were featured in an exhibition about contemporary African American life at the Paris Exposition of 1900. On view is a selection of pictures taken from a larger album of 156, which exemplify Johnston's talent for balancing pictorial delicacy and classical composition with the demands of working on assignment. Käsebier—another woman who produced photographic works of art while operating a successful commercial studio—is best known for her portraits and symbolic, soft-focus pictures of the mother-and-child theme.

The rise of photographic modernism in the 1920s and 1930s is traced in the second gallery primarily with the work of European women artists. A wall of portraits of women showing the range of artistic expression and experimentation during this period includes Claude Cahun’s radical gender-bending self-portrait in drag (1921); Lucia Moholy’s striking portrait of fellow Bauhaus student Florence Henri (1927); and Hannah Höch’s Indian Dancer: From an Ethnographic Museum (1930), a collage evoking the modern woman. Included here is also a photocollage by the little known Japanese artist Toshiko Okanoue, titled In Love (1953). Cannibalizing images from U.S. magazines such as Life and Vogue, this surreal collage represents a young Japanese woman’s perception of the Western way of life. A group of pictures taken in Mexico in the late 1920s by Italian photographer Tina Modotti possess an aesthetic clarity and beauty that reflect her increasing political involvement within her adopted country. Also included is Ilse Bing’s Self- Portrait in Mirrors (1931), a picture staging a complex mise-en-scène between two reflections— one in the mirror and the other in the camera’s eye—as well as similarly powerful works by Imogen Cunningham, Florence Henri, Germaine Krull, and Lee Miller, who experimented with mobile perspectives of the handheld camera and graphic compositions.

The third gallery features photographers who devoted themselves to the complex challenge of exploring the social world in the interwar and postwar periods. Largely comprising work by American women, this gallery includes comprehensive presentations of two of America’s leading photographers, Dorothea Lange and Helen Levitt. The breadth of Lange’s accomplishments is represented through a selection of approximately 20 photographs, all of women, including her iconic Depression-era picture Migrant Mother, Nipomo, California (1936); the memorable One Nation, Indivisible, San Francisco (1942); and pictures capturing the bustle of postwar life in America, such as Mother and Child, San Francisco (1952). Opposite these works is a wall of color photographs taken by Levitt in the 1970s on the streets of New York City. These lively, spontaneous pictures are full of humor and drama, and continue the rich tradition of the American documentary genre that Levitt helped establish in the 1940s with her black-and-white photographs. The rest of the gallery includes a variety of work made during the period, including Berenice Abbott’s documents of the changing architecture and character of New York City in the 1930s, and Barbara Morgan’s elegant 1940 photograph of dancer Martha Graham performing her dramatic piece ―Letter to the World,‖ based on the love life of American poet Emily Dickinson.

Photography’s documentary tradition in the postwar period continues in the fourth gallery, most notably with a selection of Diane Arbus’s portraits of women, such as A Widow in Her Bedroom, New York City (1963); Identical Twins, Roselle, New Jersey (1966); and Girl in Her Circus Costume, Maryland (1967). This gallery also includes work by artists of the 1960s and 1970s who embraced photography not just as a way of describing experience, but as a conceptual tool for appropriating and manipulating existing photographs. Examples include Martha Rosler’s collage Cleaning the Drapes (1969–72), which juxtaposes mages of domestic bliss taken from women’s magazines with news pictures of the war in Vietnam. The gallery also introduces several notable examples of acts performed for the camera, including Adrian Piper’s self-portrait series Food for the Spirit (1971), a meditation on transcendental being through an analysis of Kant’s Critique of Pure Reason; and VALIE EXPORT’s provocative Action Pants: Genital Panic (1969). Presented as a set of posters, this work memorialized a performance in which the Austrian artist marched into an experimental art-film house in Munich wearing crotchless trousers, challenging mostly male viewers to "look at the real thing" instead of passively enjoying images of women on the screen.

The emergence of color photography as a major force in the 1970s is seen in the fifth gallery, with large photographs, including Tina Barney’s Sunday New York Times (1982) and a picture from Cindy Sherman’s celebrated Centerfolds (1981) series. This gallery also includes the work of postmodern artists associated with The Pictures Generation, such as Barbara Kruger, Louise Lawler, Sherrie Levine, and Laurie Simmons, who played with photography’s potential to comment on the increasingly image-saturated world of the late twentieth century. Representing the other end of the photographic spectrum is the diaristic aesthetic of Nan Goldin. A group of Goldin photographs dating from 1978 to 1985 capture the shared experience of an artistic downtown New York community—a generation ravaged by drug abuse and AIDS. These pictures of the artist’s friends, lovers, and Goldin herself explore the highs and the lows of amorous relationships. These are presented opposite work by Gay Block, Sally Mann, and Sheron Rupp, who use the probing vision of straightforward photography to explore the world around us.

Concluding the installation in The Robert and Joyce Menschel Gallery are major groups of works that suggest the diversity of artistic strategies and forms in contemporary photography. A group of Judith Joy Ross portraits of very different women—a graduation guest (1993), a soldier (1990), a congresswoman (1987), and a visitor to the Vietnam Veterans Memorial (1984)—invite us to reflect upon the relationship between social roles and the unique identities of the individuals who fulfill them. Presented on the same wall is Rineke Dijkstra’s ongoing series Almerisa, comprising 11 photographs made over a period of 14 years. Dijkstra first photographed Almerisa—a six-year-old Bosnian girl whose family had relocated from their war-torn native country to Amsterdam—as part of a project documenting children of refugees. Dijkstra continued to photograph her at one- or two-year intervals, chronicling not only her development from childhood through adolescence and into adulthood but also her cultural assimilation from Eastern to Western Europe.
A selection from Carrie Mae Weems’s series From Here I Saw What Happened and I Cried (1995) superimpose sand-blasted text over found photographs to dissect photography’s historical role in imposing stereotypes upon African Americans. Rounding out this gallery is a wall dedicated to portraits of women, including work by Valérie Belin, Tanyth Berkeley, Katy Grannan, and Cindy Sherman, suggesting the plasticity of photography and, indeed, of female identity itself.

An audio program featuring commentary by the curators of the installation will be available at the Museum free of charge, courtesy of Bloomberg; on MoMAWiFi at www.moma.org/momawifi; and as a podcast on www.moma.org/audio and iTunes. MoMA Audio is a collaboration between The Museum of Modern Art and Acoustiguide, Inc. Available in English only.

This exhibition is presented in conjunction with MoMA’s publication of Modern Women: Women Artists at The Museum of Modern Art (June 2010), and is made possible by the Modern Women’s Fund.

Featuring illustrated essays by nearly 50 writers, including both MoMA curators and outside scholars, Modern Women: Women Artists at The Museum of Modern Art presents a variety of generational and cultural perspectives and a diverse range of artists whose works span the spectrum of mediums and genres in the Museum’s collection. It is published by The Museum of Modern Art and will be available in June 2010 at MoMA Stores and online at www.momastore.org. It is distributed to the trade through Distributed Art Publishers (D.A.P) in the United States and Canada, and through Thames + Hudson outside North America. The publication is made possible by the Modern Women’s Fund, established by Sarah Peter. 512 pages, 402 illustrations. Hardcover, $70.00.