Experiences, journeys and morphologies. The premise for this exhibition consists in investigating some proposals for the urbus of the future in Latin American cities, which have remained at the margins of official narratives in the so-called First World. Does this involve a return to thinking about digressions and the New Babylon by Constant (1920-2005) from new urban initiatives and projects that have not been built? Sabatini Building, Floor 3. 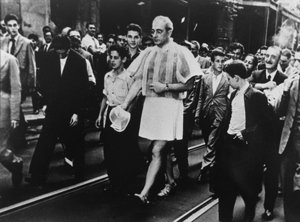 The different Brazilian and Chilean architectural concepts that form the subject of this exhibition share a humanist, visionary basis in their way of approaching the relationship between public space and collective life, topography and urbanism. This is reflected in drawings, texts and architectural models by Flavio de Carvalho (1899-1973), Juan Borchers (1910-1975), Lina Bo Bardi (1914-1992), Roberto Matta (1911-2002), and Sergio Bernardes (1919-2002), and in the Valparaíso School’s communal teaching. Poet-architects were torn between a growing drive towards modernity and technology’s promise to reduce working hours and increase leisure time. Their goal was to expand the space for homo ludens and implement a community-based life. In the case of Brazil, this was based on Carvalho’s take on Oswald de Andrade’s Anthropophagous Manifesto (1928), while in Chile it involved the assumption of values based on hospitality and accessibility.

The notion of "drift" used here arises in response to the question, "What was the extent of the rationalist prophecy in South America?" Constant’s notion of "unitary urbanism" comes to mind as does Guy Debord and his colleagues’ idea of "dérive" — but they are not applicable here. . Over the course of the exhibition visitors will realise that they are far from war-ruined Europe, where "the house of Man crumbled".1 They will not encounter the logical premises that built modernity there. Prior to his first trip to South America, Le Corbusier (1887-1965) considered that using a meander meant reproducing the irregular form of a "mule trail" found in the medieval city. After his 1929 trip, however, he allowed himself to design a building-viaduct in the form of a huge wave set in the topography of a hilly landscape. The exhibition brings up the New World’s questioning of the old civilizations, as well as Sergio Buarque de Holanda’s famous distinction between the Portuguese "sower’s carelessness" and the Spanish "tile layer’s reason" (1936) to explain different phases of colonialism, domination and urbanisation: whereas the former type evolves randomly, the latter is purposefully constructed as in a grid.

There are, however, other forms of drift. They go by different names: experience, psychological morphology, journey. Rather than architects or urban planners, it was poets who invented names to evoke civilisations in the tropics and the Andes. Utopia-land is the result of Blaise Cendrars’ Brazilian adventure, in the legendary 1920s, across a continent imbued with hope; while the Amereida, an Aeneid for the southern hemisphere, took shape in 1965 from a collective project that deliberately omitted the concept of authorship.2

Like Cendrars, other foreigners considered Brazil a "spiritual homeland" characterised by a superior nature and flexible national boundaries. For Lina Bo Bardi, who emigrated to her "country of choice" in 1946, architecture was "an art that has to seriously take into account the land in which it is practiced." 3 Her praise of the vernacular nature of modern consciousness derives from the Anthropophagous Manifesto. Understanding how crafts coexisted with different modes of industrial production throws light on the issue of a "synthesis of the arts", a guide to the present exhibition.

Le Corbusier’s sketch anticipating the future of Rio de Janeiro (which Sergio Bernardes developed in his 1965 version of the vertical-barrios) has generated divergent interpretations. Notwithstanding an enduring admiration for the great master, these disagreements have given rise to changes in direction. For example, the young Roberto Matta left Chile to work with Le Corbusier in 1934-35 but then renounced him, in order to embrace Surrealism, as celebrated in Mathématique Sensible – Architecture du Temps.4 For Matta, the humanisation of architecture into a psychic, purely subjective space involved a form of spatial eroticisation: space became soft in order to mould itself to the bodies and sensory desires of its inhabitants.

Nor was the encounter between Le Corbusier and Flavio de Carvalho in 1929 more fruitful: the Brazilian’s efforts to introduce the syntax of modern architecture into São Paulo never took concrete shape. Carvalho’s un-built projects reinforced the label of "revolutionary romantic" given to him by Le Corbusier. But he then followed a path contrary to the "efficacy" of the master’s dictates. Inspired by his reading of Freud, Carvalho had in mind other paradigms. The twentieth-century city would become an extension of the home and would be aimed at the "naked man" (the anthropophagus), liberated from the concepts of a bourgeois life-style, family and property. This approach is even evidenced in Carvalho’s New Look (1956), a masculine suit ideal for modern life in the tropics and a forerunner of the miniskirt.

How, then, can an ode to functionalist urbanism be justified in Latin-American cities that are premised on informality? Can it be said that "drifting" has always been the best response? In his attempt to understand this urban imagery, Adrián Gorelik has pointed to "interruption" as a recurring sign in the symbolic representation of South American countries.5 This exhibition highlights many such disruptive, unfinished, suspended or betrayed directions. On July 31 1965, local press in Punta Arenas, in the far south of Chile, announced: "Ten university professors embark on a geo-poetical study across Latin America." On September 10, the expedition retreated before reaching Santa Cruz de la Sierra in the Amazon Basin, for reasons only revealed two years later: Che Guevara’s guerrilla forces had entered the region, which was already controlled by US intelligence services.

For complex reasons that do not need to be detailed here, South America became a fertile laboratory for numerous heterotopias – or countermodels. Until recently many of these artistic manifestations were considered late, even counterfeit. Yet far from having exhausted their potential, they now overshadow Eurocentric narratives. It was Lina Bo Bardi who, once again, recognized the significance of popular culture in the making of Brazilian modernism, arguing that it "does not derive from colonial (architecture) but from the primitive caipira, (the rural architecture) of the peasant."6

During the 1960s artists gravitated towards those architecture schools which offered a mixture of human sciences (philosophical and anthropological) in place of the technical and military focus associated with the architect-engineer. By conceiving territory flexibly, in cultural terms, space could be approached through poiesis rather than a strictly functionalist agenda. The Open City in Valparaíso reflected this desire to encompass life in all its unexpectedness. Manifest mostly on the university campus today, its legacy is the clearest representation of an idea of utopia that has no resonance within a Neo-liberal system that continues to resist facing its failure to produce habitable space.

Seminar and Workshop
The drift is ours
Date: June 30 - July 3, 2010
How can one be both South American and modern? How can a relationship with Europe as a reference point be established? Anthropological observations and poetry events allow us to expand our experience of the topography of the place. In conjunction with the exhibition Drifts and Derivations, the Museo Reina Sofía has organised a workshop inspired by the teaching methods of the Valparaíso School, in which poets and architects will encourage participants to use a playful/constructive approach. Adopting a viewpoint that runs counter to an emphasis on rational urban design, specialists from Brazil and Chile, together with Spanish urban designers and architects, will direct a series of working days that include trips around the city and lectures on the Museum’s terrace.