This exhibition surveys a group of major works by Australian-born, London-based sculptor. Often naked and suspended in states of self-consciousness, introspection or deep contemplation, his subjects present both emotional and physical states of exposure. Featuring 12 hyperrealistic sculptures, most of human figures, some new works and a a part from Australian and international collections, the show will be one of the most comprehensive of Mueck's work ever presented. 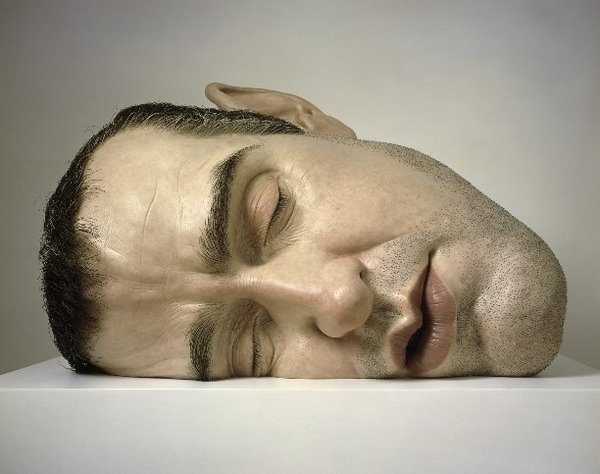 The largest ever Australian exhibition of life-like sculptures by major contemporary artist Ron Mueck opens at the Gallery of Modern Art, Brisbane, from tomorrow.

Queensland Art Gallery Director Tony Ellwood said the exhibition of 12 hyperrealistic sculptures, most of human figures, would be on display until August 1.

'Queensland audiences will be captivated by Mueck's moving and poignant sculptures drawn from Australian and international collections. Sometimes colossal, and at other times miniature, the works resonate with deep emotion,' Mr Ellwood said.

'Often naked and suspended in states of self-consciousness or deep contemplation, Mueck's figures are overwhelmingly human.

'The works on display include a five-metre long newborn baby, a tiny, aged woman near death and a compelling sculpture of the artist's own face.'
Mr Ellwood said the exhibition included the iconic work Dead Dad 1996/97, which appeared in 'Sensation', the controversial 1997 survey of Young British Artists from the Saatchi collection.

'Other works include Man in a boat 2002, a small-scale figure in a full-size canoe and the towering, hirsute Wild man 2005. Also appearing is In bed, the 2005 work from the Queensland Art Gallery's Collection,' he said. 'Four new works by Mueck appear for the first time in this National Gallery of Victoria Touring Exhibition, curated by David Hurlston, Curator, Australian Art, NGV.'

"People in all their variations and similarities are pretty fascinating. Occasionally, some of these aspects come into focus... and I think maybe I could capture that." – Ron Mueck

This exhibition surveys a group of major works by Australian-born, London-based sculptor Ron Mueck. Mueck's sculptures are some of the most widely acclaimed and identifiable works in the international contemporary art arena. Often naked and suspended in states of self-consciousness, introspection or deep contemplation, his figures present both emotional and physical states of exposure. Astounding in their realism, Mueck's works have earned him a singular place as the creator of some of the most evocative sculptures of our time. Featuring celebrated works from Australian and international collections, in addition to new sculptures, it will be one of the most comprehensive exhibitions of Mueck's work ever presented.

Following its exhibition in Brisbane, 'Ron Mueck' will tour to Christchurch Art Gallery, New Zealand. A fully illustrated colour catalogue is published in conjunction with the exhibition.

Please be advised that some art work in this exhibition contains graphic material that may not be suitable for all audiences.