For the first major solo exhibition by the artist Sven Johne, the Frankfurter Kunstverein has brought several of his most significant series of works together into one survey. As well as experiencing new pieces that were created especially for the exhibition, one also has the opportunity to explore the conceptual exactitude of his artistic approach. Within the context of the finalists' exhibition of the 'Deutsche Borse Photography Prize 2010', the Frankfurter Kunstverein presents the 4 photographers Anna Fox, Zoe Leonard, Sophie Ristelhueber and Donovan Wylie. 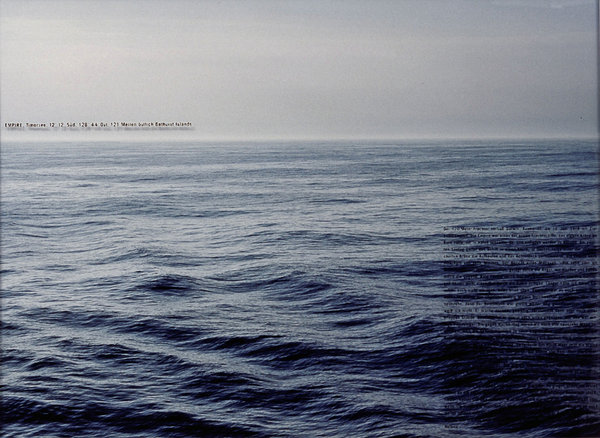 For the first major solo exhibition by the artist Sven Johne, the Frankfurter Kunstverein has brought several of his most significant series of works together into one survey. As well as experiencing new pieces that were created especially for the exhibition in Frankfurt, one also has the opportunity to explore the conceptual exactitude of his artistic approach. Moreover, it will be possible to thoroughly compare the ways in which he examines the content of documentation and the news.

Sven Johne pursues a conceptual methodology in his documentary photography: like an investigative reporter he approaches social phenomena, he is doing research about the background of media reports and found footage, visits the places mentioned therein and embarks on a documentation thereof. In so doing, photos, texts, videos and archives are generated that are theoretically linked and engage in a process of questioning concerning their authenticity.

Often it involves small announcements and peripheral notes from the local press, for example, suicides, ships lost at sea or killing sprees. Here, Johne sets out in search of clues. Seen as though under a magnifying glass, he allows individual destinies to become exemplary portraits of the social status quo. His cyclically created works therefore merge fiction with reality: it is not whether the announcements are true or not, but rather it is the explanations and their relationships to the world that counts. The elements of his works function either as apparent or real evidence of personal fates that are in turn expressions or manifestations of the current conditions of social, economic and political constellations.

Sven Johne (born 1976, on Ruegen) lives and works in Berlin. His works are represented in numerous national and international collections. Among others, his oeuvre was shown at the Center for Photography in Barcelona, at the Kunstmuseum Bonn, Kalmar Konstmuseum and at the ZKM Center for Art and Media, Karlsruhe.

On the occasion of the exhibition a catalogue with texts by Werner D'Inka, Jens Kastner, Catrin Lorch and a foreword by Lilian Engelmann, Renate Goldmann and Holger Kube Ventura will be published by Frankfurter Kunstverein and distributed by Revolver Publishing by VVV, Berlin.

Within the context of the finalists' exhibition of the "Deutsche Börse Photography Prize 2010", the Frankfurter Kunstverein will be presenting the four photographers Anna Fox (UK, born in 1961), Zoe Leonard (USA, born in 1961), Sophie Ristelhueber (FR, born in 1949) and Donovan Wylie (UK, born in 1971). The " 2010 Deutsche Börse Photography Prize" is an international prize for contemporary photography. It is awarded on an annual basis by the Photographers' Gallery in London to an artist of any nationality who has made an important contribution (in the context of an exhibition or publication) to photography in Europe in the previous year.

The French photographer Sophie Ristelhueber has been awarded the “2010 Deutsche Börse Photography Prize” for her retrospective “Sophie Ristelhueber” at Jeu de Paume, Paris (2009). The award comes with prize money of £30.000. The other shortlisted artists were each awarded £3.000.

The selection of works illustrates the diversity of contemporary photography and thus takes into account various conceptual approaches and photographic methods. Sophie Ristelhueber has been active as photographer for 25 years and has, during the past years, mainly examined the impact of human conflict upon architecture and landscape in Europe and the Middle East.

Anna Fox, nominated for her exhibition "Cockroach Diary & Other Stories", Ffotogallery, Cardiff (2009), reveals in her extensive photographic work, with the help of a mixture of social observation and personal diary projects, a seemingly claustrophobic and often bizarre portrait of everyday British life. Zoe Leonard was nominated for her retrospective "Zoe Leonard: Photographs", Pinakothek der Moderne, Munich (2009). The subject of her predominantly black-and-white photographs is urban landscapes, which can be conceived on the one hand as a sort of personal assessment, while on the other hand too, as a commentary on photography itself. Donovan Wylie was nominated for his exhibition "MAZE 2007/8" last year at Belfast Exposed Photography. Having grown up in Belfast, his photography focuses on post-conflict Northern. For this project he investigated the identity, history and territory of his country through a systematic documentation of the infamous Maze prison.

Organisation: The Photographers' Gallery, London in cooperation with the Frankfurter Kunstverein