Konrad Fischer influenced the Conceptual art of the 1960s and seventies in many ways. Presented in the galleries of the Museum are works from the archive - an accumulation of many years of collaboration with artists - which marked the lives of Dorothee and Konrad Fischer, not least because the couple lived in their very midst. Viewed in hindsight, the key works of art of the time in sculpture were those of Bruce Nauman, Carl Andre, Donald Judd and Dan Flavin. Curated by Friedrich Meschede. 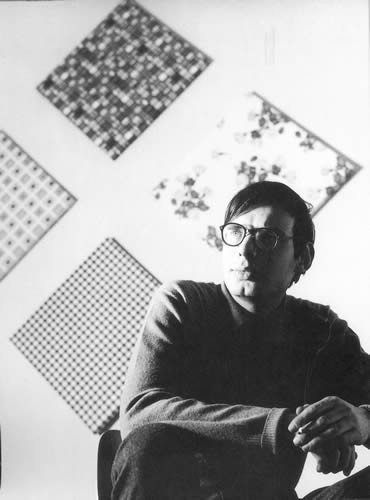 Konrad Fischer (Düsseldorf 1939–1996) influenced the Conceptual art of the 1960s and seventies in many ways. In the beginning of the sixties, Fischer studied painting with Bruno Goller and Karl Otto Götz at the Art Academy in Düsseldorf, where he became friends with other artists such as Manfred Kuttner, Sigmar Polke and Gerhard Richter. It was together with Richter that Fischer, in October 1963, organised an event entitled Living with Pop – A Demonstration for Capitalist Realism in a furniture store in Düsseldorf. This first public appearance of the two artists was a performance, a happening, an alternative exhibition outside the conventional white cube of the art gallery and a protest rolled into one.

Konrad Fischer, who during those early years painted under the name of Konrad Lueg, his mother’s maiden name, soon counted among the young avant-garde artists in West Germany. The first chapter of this exhibition is dedicated to Konrad Lueg, with a selection of works made between 1964 and 1969. The first motifs come from the world of sport – football players and boxers – and are then followed, from 1965 onwards, by a preoccupation with the phenomenon of serial motifs and patterns, for which he uses industrially produced textiles and plastic films that are either painted, feature simple shapes or are combined to form multi-piece wall installations. Lastly, in Paris (1968) and Munich (1969), Konrad Lueg exhibited canvases painted in phosphorescent colours that momentarily capture the shadows of passing viewers cast by photographic flashlights.

On 29 October 1967, Konrad Fischer opened an exhibition space for contemporary art at 12 Neubrückstrasse, Düsseldorf, with the floor sculpture Altstadt Rectangle by the American sculptor Carl Andre. What used to be a gated passageway now served as a gallery, although Fischer deliberately avoided the term ‘gallery’ and simply called his exhibitions ‘At Konrad Fischer’s’. In his new capacity as a promoter and curator, Fischer invited the international avant-garde of his generation to Düsseldorf, mainly with the idea of realising site-specific projects for this unusual, singular space. The chronology of the exhibitions that took place during the first few years reads like an encyclopaedia of the Conceptual and Minimal art of those years. Many young artists, both from Germany and abroad, had their first solo shows at Konrad Fischer’s, from where their works later found their way into significant private and public European collections.

Presented in the other galleries of the Museum are works from the archive – an accumulation of many years of collaboration with artists – which marked the lives of Dorothee and Konrad Fischer, not least because the couple lived in their very midst. Viewed in hindsight, the key works of art of the time in sculpture were those of Bruce Nauman, Carl Andre, Donald Judd and Dan Flavin. In Conceptual art it was Sol LeWitt, Hanne Darboven and Richard Long, in painting Robert Ryman and Robert Mangold, and in the field of Conceptual photography Bernd and Hilla Becher and Jan Dibbets. The entire early works of Gilbert & George can be seen, as well as a wonderful piece by Eva Hesse, who regrettably died much too early for any lasting collaboration. Works by On Kawara, Piero Manzoni, Joseph Beuys and Giuseppe Penone, together with an impressive group of works by Mario Merz, complete the picture of the markedly European development of Conceptual art of those years.

In the early 1980s Konrad Fischer sought to make a new beginning with artists of a younger generation, as documented by works by Thomas Schütte, Wolfgang Laib and Harald Klingelhöller, a generation that was likewise – in Juan Muñoz, for example – internationally oriented. The exhibition ends with Room for a Day by Gregor Schneider. Konrad Fischer was convinced that there were always good artists, whatever the period.

Some of the works in this exhibition are subtitled with dedications – ‘For Konrad’, ‘For Dorothee’, ‘For Berta’, ‘For Kasper’ – and thus testify to the intimate relationship that existed with those artists who were at home ‘at Konrad Fischer’s’. Konrad Fischer’s extensive promoting and curatorial activities make one thing clear above all else, namely a specific attitude towards art, an attitude that enabled Fischer to develop – both for himself and for all who entered into this dialogue – a different life philosophy and to live by it.

In addition to the multitude of projects that Konrad Fischer realised in the gallery, he also exercised his curatorial ambitions beyond the walls of 12 Neubrückstrasse. When Cologne’s first Art Market, initiated by the Association of Progressive German Art Dealers, took place in the summer of 1968, Konrad Fischer criticised it because only German art dealers were invited to take part. Together with Hans Strelow, Fischer organised, in the shortest conceivable time, the counter-exhibition Prospect 1968 at the Kunsthalle in Düsseldorf and invited – as though obeying the dictates of a manifesto – only international galleries and their artists. The next edition of Prospect took place in 1969, continuing the trend of bringing the international avant-garde to Düsseldorf for a week. The internationalising and awakening processes of the art world in Europe during those years were clearly ascribable not least to Fischer’s initiative of curating exhibitions in public institutions, but also to his committed programme of exhibitions at his own gallery. In 1969 Fischer also curated the now legendary exhibition Konzeption/Conception. Documentation of Today’s Art Tendencies at the Städtisches Museum in Leverkusen. Prospect 71. Projection exclusively addressed contemporary photography and film/video and was the very first European art exhibition to be devoted to video and film.

Fischer’s involvement, moreover, went in both directions, for he also brought the young European avant-garde to New York in the exhibition de Europa at the John Weber Gallery in 1972. In the same year, marking the zenith of Konrad Fischer’s curatorial activities, he curated, together with Klaus Honnef, an important section of Documenta 5 entitled Idea +Idea/Light. The exhibition Prospect 73. Malers/Painters/Peintres, which took place in 1973, was devoted to contemporary trends in painting. 1976 saw the development of a new type of exhibition for the final edition – ProspectRetrospect. Europa 1946–1976 – of this series. Finally, in 1979, Konrad Fischer organised an exhibition in Zürich entitled With a Certain Smile.

Together with documentation from the Konrad Fischer Gallery, the material of his other curatorial activities is presented at the MACBA Study Center for the very first time and completes the picture of Konrad Fischer’s complex personality; an influential figure who undeniably played a significant role in the development of Conceptual art during those early years.
Friedrich Meschede

This lecture series, organised in collaboration with the Goethe Institut of Barcelona, aims not only to offer a deeper look into the figure of Konrad Fischer (1939-1996), artist, gallery owner and exhibition curator, but also to contribute to an understanding of his importance in the context of the art scene – German and international – of his time.

Monday 17 May
Jürgen Harten: The Prospekt exhibition series (1968-1976)
Friedrich Meschede, head of temporary exhibitions at the MACBA, will introduce the presentation.

Jürgen Harten is an art curator, critic and historian. He was secretary of Documenta 4 in Kassel and in 1969 he joined the Kunsthalle in Düsseldorf, first as a scientific assistant and later, from 1972 forward, as director. Between 1998 and 2000, he was the founding director of the Museum Kunst Palast in Düsseldorf. He has lived in Berlin since 2003.

Brigitte Kölle is an exhibition curator and art historian. She was scientific director of the Kunsthalle Portikus in Frankfurt, and from 1999 to 2003 she was curator at the Institute of Visual Arts in Milwaukee (United States). As an independent curator she has been responsible for many exhibition projects in international institutions, like P.S.1 in New York, the Frankfurter Kunstverein and the Venice Biennale. She is editor and contributor of the book Konrad Fischer: Okey Dokey (Walther König Verlag, Cologne, 2007) about the life and personality of the gallery owner.

Lynda Morris is a professor at Norwich University College of the Arts and curator at EASTinternational. For twenty-five years she was curator at the Norwich Gallery of the Norwich School of Arts and Design. She edited the book Unconcealed: The International Network of Conceptual Artists 1967-77 – Dealers, Exhibitions and Public Collections (Ridinghouse, 2009) by Sophie Richard, crucial to an understanding of the emergence of conceptual art in northern Europe.