'Object : Gesture : Grid. St Ives and the International Avant-garde' is the largest and most extensive collection display for over 10 years. Highlights include important works by international artists such as Carl Andre, Willem de Kooning, Sol LeWitt, Pablo Picasso and Jackson Pollock. In 'No Big Deal Thing' Lily van der Stokker presents her bold, colourful works, which most often take the form of large-scale decorative wall drawings, and have a child-like innocence naivety. 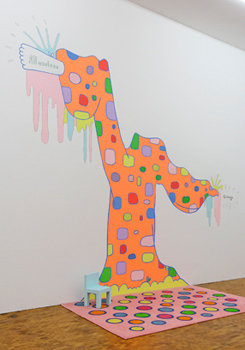 This summer a new three room display takes post-Second World War art in St Ives as a starting point to explore some of the common characteristics of Modern Art and the shared visual language of artists working in Europe and America from the 1930s to the late 1970s. Drawing on key British and international works in the Tate Collection, this will be the largest and most extensive Collection display at Tate St Ives for over ten years. Highlights include important works by British and international artists such as Carl Andre, Willem de Kooning, Sol LeWitt, Pablo Picasso and Jackson Pollock alongside Sandra Blow, Barbara Hepworth, Patrick Heron and Peter Lanyon.

Considering the making and shaping of Modernism in St Ives, and marking some of the breakthroughs, revivals and continuities of artistic ideas which emerge throughout the twentieth century, the exhibition focuses on some of the international meeting points which feed into the story of St Ives and British Art.

Object
In the 1930s, Ben Nicholson and Barbara Hepworth were regularly visiting Paris and encountering artists such as Pablo Picasso and Constantin Brancusi. How did Nicholson find a way to craft the 'objectness' of his painted boards to work with the still-life/landscape he was portraying? How did Hepworth express the subconscious in her direct carvings of the 1930s? From the fragmented still-life paintings of Georges Braque of 1900s to the 1980s driftwood assemblages of Margaret Mellis, Object reveals how Cubism and Surrealism influenced forms in the mid to late twentieth century.

Gesture
The materiality of paint and its connection to subconscious expression is considered in this room. Recalling significant European influences such as Tachism, Art Informel and Cobra, as well as the development of Abstract Expressionism in America with which a number of St Ives artists had a connection, it considers their influence on artists such as William Scott, Roger Hilton, Patrick Heron, Peter Lanyon and Sandra Blow. It includes works by Jackson Pollock, Willem de Kooning and Karel Appel.

Grid
Works by icons of the twentieth century such as Joseph Albers, Sol LeWitt and Donald Judd help explore the way the grid has drawn painting, sculpture and architecture together, making the viewer both psychologically and physically part of artistic experience. The selection also includes work by Ben Nicholson, Victor Pasmore, Bob Law, Mary Martin and Eva Hesse.

Lily van der Stokker is a Dutch artist based in Amsterdam and New York. Her bold, colourful works most often take the form of large-scale decorative wall drawings, and have a child-like innocence and an adolescent naivety. They deal, in a disarmingly unashamed and exuberant way, with ideas of beauty, love, relationships, family and the everyday. Despite, or perhaps because of, their apparent simplicity, van der Stokker's works are often challenging and she has come to be seen as an increasingly important artist in the growing discourse of post-feminist practice. This show will be the largest exhibition of her work to date in the UK.

van der Stokker plays on stereotypical femininity, developing a style she calls 'nonshouting feminism' through which to explore ideas that seem to be forbidden in art, especially the decorative, the sentimental and the 'nice.' Her demure medium: coloured-pencil drawings on A4 paper which she scales up and paints directly onto the walls of the gallery, call to mind the palette of baby clothes or children's drawings and address the gap between the 'art world' and the creativity of everybody else. She seems to ask just what is a fitting subject for a work of art in a museum? Challenging the idea of the 'grand', the 'serious' or the 'solemn'. At Tate St Ives, van der Stokker will present a series of large-scale wall drawings, furniture works and small works on paper in the spectacular, curved, sea-facing galleries.

Born in 1954, her work found prominence in the early 1990s as she began exhibiting in important exhibitions and institutions across the world including the Pompidou Centre, Paris, Van Abbe Museum, Eindhoven and Walker Art Centre, Minneapolis.

A fully-illustrated catalogue will accompany the exhibition including a new essay by Charles Esche.

The exhibition has been supported by Tate St Ives Members, Tate Members, the Embassy of the Kingdom of the Netherlands and the Mondriaan Foundation.

For further information on the exhibition and for images, please contact Arwen Fitch: 01736 792185 or arwen.fitch@tate.org.uk