Specific Objects without Specific Form. The exhibition is part of a major traveling retrospective of the artist and includes some paintings, sculptures, photographic works and public projects. At the Fondation, the artist Carol Bove will undo the show and re-install it from late-July onward, adding and removing artworks, and the order of presentation. Gonzalez-Torres' artworks, which will be hung between, above, and around the permanent collection of the Fondation, occupying marginal spaces in the way the artist himself often showed. 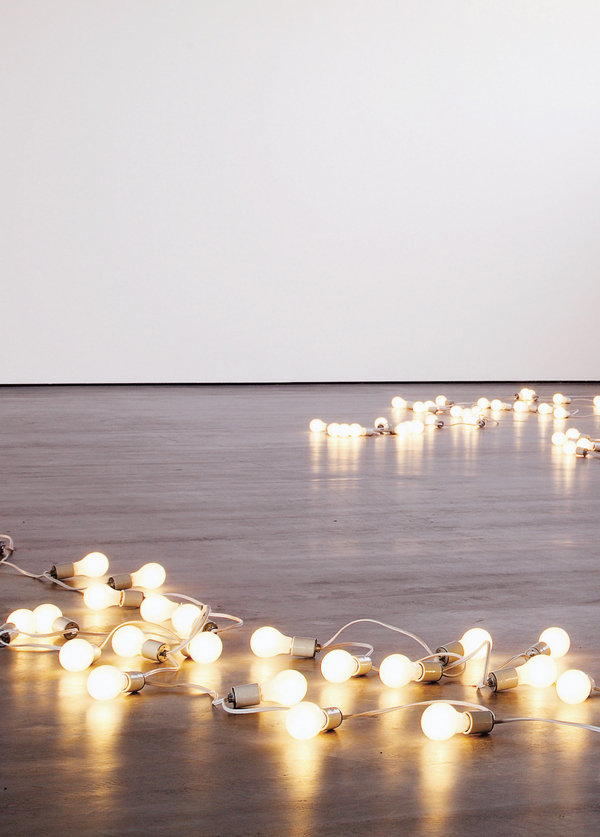 Curated by Elena Filipovic, including a curated version by Carol Bove on view from late-July onward.

The Fondation Beyeler hosts part of a major traveling retrospective of Felix Gonzalez-Torres (American, b. Cuba, 1957-1996), one of the most influential artists of his generation. Including some rarely seen but also more known paintings, sculptures, photographic works, and public projects, it includes pieces from throughout Gonzalez-Torres’ short but prolific career. Drawn from public and private collections throughout the United States and Europe, this groundbreaking exhibition proposes an experimental form that is indebted to the artist’s own radical conception of the artwork.

Defying the idea of the exhibition as fixed and the retrospective as totalizing, the exhibition Felix Gonzalez-Torres. Specific Objects without Specific Form offers instead several exhibition versions, and none the authoritative one, all the better to present the oeuvre of an artist who put fragility, the passage of time, and the questioning of authority at the center of his artwork. At each venue in which the show will be hosted, the exhibition will open to the public and then halfway through its duration, it will be re-installed by a different invited artist whose practice has been informed by Gonzalez-Torres’ work. At the Fondation Beyeler, the artist Carol Bove will undo the show and re-install it from late-July onward — adding and removing artworks, changing such things as lighting, labels, and the order of presentation, in other words — effectively making an entirely new version of the exhibition.

The two versions of the exhibition at the Fondation Beyeler will be interspersed throughout the upper galleries that hold the permanent collection as well as occupying the lower galleries. This combination of the Fondation Beyeler’s extraordinary collection of modernist masterpieces and Gonzalez-Torres’ artworks, which will be hung between, above, and around the permanent collection, will allow visitors to experience Gonzalez-Torres’ complex oeuvre in much the way the artist himself often showed it, that is, occupying marginal spaces and offering itself to the visitor in unexpected locations. Thus the galleries of the permanent collection also host part of a retrospective exhibition of an artist whose body of work inspired this unconventional way of showing it. "Untitled", 1989/1995, a frieze of personal and historical events making up a portrait of Gonzalez-Torres himself lines the wall in a gallery where other famous portraits, for instance, by Paul Cézanne and Pablo Picasso can be found; "Untitled" (Golden), 1995, a shimmering curtain of golden beads traverses a room filled with iconic pieces by Alberto Giacometti and Francis Bacon and offers another way of making reference to the body; "Untitled" (Throat), 1991, a unique and rarely seen piece by Gonzalez-Torres, and his smallest candy pile sits humbly in the corner of a gallery of paintings, expressing with the simplest of means the power of art to convey such emotions as vulnerability and melancholy; all of the juxtapositions meant not only to reveal something about Gonzalez-Torres’ way of thinking and occupying space with his art, but also will allow visitors to look differently at the canonic historic works in the collection. The exhibition also includes a monumental outdoor lightstring piece hung in public space and a series of iconic billboard images by Gonzalez-Torres that will be spread throughout Basel
and neighboring cities (Bern, Genf, Luzern, St. Gallen and Zurich), thus turning public space into an extended space of the exhibition.

Born in Cuba, Gonzalez-Torres settled in New York in the late 1970s, where he studied art and began his practice as an artist before his untimely death of AIDS related complications in 1996, at the age of thirty-eight. He participated in the art collective Group Material in the 1980s, was an engaged social activist, and in a relatively short time developed a profoundly influential body of work that can be seen in critical relationship to Conceptual art and Minimalism, mixing political critique, emotional affect, and deep formal concerns in a wide range of media, including drawings, sculpture, and public billboards, often using ordinary objects as a starting point—clocks, mirrors, light fixtures. Amongst his most famous artworks are his piles of candy and paper stacks from which viewers are allowed to take away a piece. With those pieces, as with his lightstrings, billowing voile curtains, his word "portraits" mixing historical events and personal data that can continuously be changed over time by their owners, or his twin ticking clocks that will inevitably fall out of sync, Gonzalez-Torres was consistently exploring the connections between time, authority, art, and existence. Those artworks are premised, like so much of what he did, on instability and potential for change. As artist Lawrence Wiener once said — thus inspiring this exhibition’s title — Gonzalez-Torres had managed something simple but entirely radical: artworks that were "specific objects that had no specific form." The result is his profoundly human body of work, intimate and fragile even as it destabilizes so many seemingly unshakable certainties (the artwork as fixed, the author as the ultimate form-giver, the exhibition as a place to look but not touch).

Inspired by Gonzalez-Torres’ understanding of the artwork as potentially infinite in meaning and his endeavor to question conventions and the notion of authority, as well as his practice of changing the arrangement of artworks weekly in the case of one exhibition ("Every Week There Is Something Different," 1991) or, in another, shifting the form and content of an exhibition when it went from one venue to another ("Traveling," 1994), Felix Gonzalez-Torres. Specific Objects without Specific Form grounds its approach in Gonzalez-Torres’ very personal understanding not only of the art exhibition, but also of the artwork writ large.

The tour of the exhibition will be followed by a fully illustrated catalogue documenting each version of the exhibition and including essays by Elena Filipovic, Danh Vo, Carol Bove, and Tino Sehgal as well as interviews with artists of various generations. Essentially a publication determined by the voice of artists, Felix Gonzalez-Torres. Specific Objects without Specific Form will underscore the decisive impact and importance of Gonzalez-Torres’ work on art practices today. Due to appear in 2011.