Her work from the 1970s up to the present. One of the things that distinguish the work of Marlene Dumas is her remarkable blend of immediacy and intimacy. She encounters human beings in her pictures occasionally even in a provocative manner, sometimes with humor. 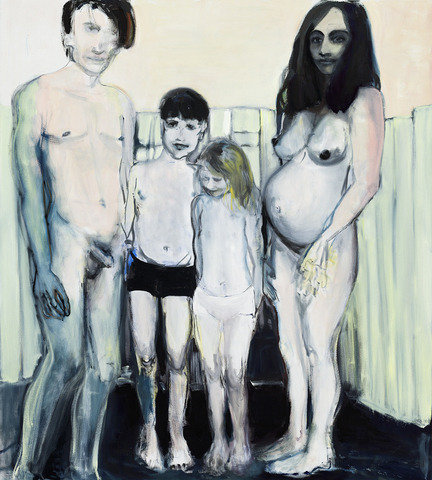 The exhibition at the Fondation Beyeler is devoted to the extensive oeuvre of Marlene Dumas, with its focus on the human body. Offering a unique review of her work from the 1970s up to the present, it is to date the most comprehensive European retrospective of this eminent South African artist now based in Amsterdam. In addition to her iconic paintings and drawings, the show features a selection of experimental collages from her early work as well as some of her most recent paintings.

One of the things that distinguish the work of Marlene Dumas is her remarkable blend of immediacy and intimacy. She encounters human beings in her pictures without reservation, occasionally even in a provocative manner, sometimes with humor. She concedes autonomy to color but her eye and the image’s focus is always centered on the human figure. Her works impressively show what painting can still achieve in this day and age, undoubtedly making her one the most significant and interesting women artists of the present day.

Her individual as well her group portraits display a varied palette of shades and contrasts. Expressive colors alternate with almost transparent hues that appear to illuminate the canvas from within. At times her pictures render very fragile, seemingly lifeless beings but then again she does not shy from depicting mutilated bodies and strikingly expressive faces. Like no other, she shows how artistic beauty can also relate to scenes of dread and horror. In a row of new, hitherto unseen works she turns her attention more strongly to the relationship between figure and space.

For many of her paintings and watercolors, Dumas relies on a pictorial archive she began compiling back in her youth. She often refers to current political crises or pressing societal issues, but her archive also contains private family photographs, art historical references, as well as press photos. Based on photographs taken from newspapers and magazines she transforms the templates with her magic touch of the brush into stirring and gripping, often even sinister paintings on canvas – what the camera time freezes in photography, Dumas brings back to life in her paintings. Her pictures radiate a compelling and sensuous power which viewers find hard to evade.

The exhibition at the Fondation Beyeler was developed in close collaboration with Marlene Dumas. Following a rough chronological order it traces her development as an artist. However, the opening section of the show follows a different plot. The first room features a number of her key works such as The Painter (1994), The Sleep of Reason (2009) and The Artist and his Model (2013). In this way the artist herself guides the visitor through the show with its focus on her unbroken fascination for the human image in painting.

Marlene Dumas was born in 1953 near Cape Town (South Africa) where she also grew up. In 1976 she moved to the Netherlands where she still lives and works. Her works are held by museums and private as well as public collections across the world. Recent key exhibitions include shows at the Haus für Kunst, Munich (2010/2011), the Museum of Contemporary Art, L. A., and the Museum of Modern Art, New York (2008), and the Marugame Genichiro-Inokuma Museum of Contemporary Art, Marugame, Japan (2007). Dumas participated in DOCUMENTA IX, 1992, and the Venice Biennale in 1995. In 2012 she was awarded the prestigious Johannes Vermeer Prize. The present exhibition is curated by Theodora Vischer, Senior Curator at the Fondation Beyeler. The show was organized jointly with the Stedelijk Museum in Amsterdam, NL, and the Tate Modern in London, UK, albeit with differing emphases at the different venues. A joint catalogue in English and German is already available