The 4th Bucharest Biennale promote awareness and dissemination of the culture, particularly in the fields of the arts. BB4 takes the ambiguity of the German term 'Handlung' - that is impossible to translate in all its levels of meaning, but it is somehow located between action, activity, agency and participation, but at the same time it could also mean story or even narration - as a starting point to examine diverse practices, which are proposing various forms of action. The curator of BB4, Felix Vogel, has selected 37 participants/artists from 19 countries. 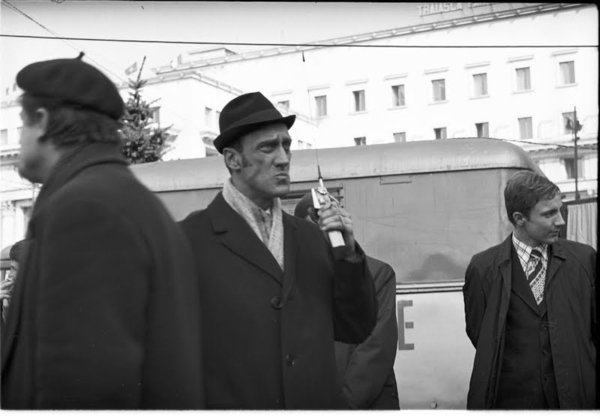 BB4 takes the ambiguity of the German term "Handlung" – that is impossible to translate in all its levels of meaning, but it is somehow located between action, activity, agency and participation, but at the same time it could also mean story or even narration – as a starting point to examine diverse practices, which are proposing various forms of action. BB4 attempts to scrutinize and to exhaust the promise – that might just be a supposition – of art taking place in the public sphere and is it thus creating possibilities for (political) action or does the artwork itself has already inherited this moment of action? Therefore, the exhibition rather tries to articulate questions and suggests different prospects than to formulate answers. BB4 will show artistic projects that deal with direct involvement in actions, participation and public space as well as community based art, but also works that are based on questioning, correcting and subverting history and historiography form, among others, a central point. The biennial aims to intensify the interaction with the urban and political context in Bucharest by inviting participants from different fields.

Bucharest Biennale promote awareness and dissemination of the culture, particularly in the fields of the arts, by means of exchanges and cultural cooperation within Europe and beyond and is looking for strategies that would develop mutual understanding and offer insights from different perspectives. We are interested in the link between creative practice and social development, in the links between the local, European and global contexts. Our programs promote the exchange of art and ideas through the staging of contemporary arts and work globally and locally, bringing together an international vision of art and cross-cultural exchange with a commitment to the community involvement and the enrichment of Bucharest's cultural resources.

We assume the urge of a dialogue with the public, of a platform for artists as much as the need of reinventing new forms of artistic expression and encourage curators to make a large selection of artists who would represent best the European unity in diversity.
BB aims to resolve the twofold problems of tradition and modernity, past and present, localism and global village, it strives to attain a balanced status between its aesthetic/artistic quality and popularity by overcoming the feeling of estrangement that the general public has towards the contemporary arts.

The Biennale is building a strong partnership between Bucharest - which is more than a city, it is a symbol of how political can be reflected in every aspect of life - and the Western Europe; it links to an universal problem - that does not take into consideration the geographical or historical context - the problem of resistance in daily life, of details and living as a way of living. BB is a structure able to transform the City itself into an ongoing workshop-cum-field of action.

Fundamentally, European culture has been the result of exchange - sometimes peaceful, other times violent - that have taken place between neighboring societies and between different social groups within a given state. These horizontal and vertical forms of cultural exchange occurred in many different manners: through imitation, assimilation, dissimulation, appropriation, through either mutual understanding or hegemonic dominance.

We would like to operate in a way that demonstrates sensitivity and competence in dealing with the "others" as the "alter" from different cultural backgrounds.

BB aims to encourage creativity of artists, public access to culture, the dissemination of art and culture, inter-cultural dialogue and knowledge of the history and cultural heritage of the European and extra-European people.
Its general purpose is to engender a shared cultural area by bringing people together while preserving their national and regional multiplicity and diversity.

Bucharest Biennale is powered by artphoto asc., cultural and non-profit NGO, publisher of PAVILION [journal for politics and culture ] http://www.pavilionjournal.org

CURATOR
Felix Vogel (b. 1987) is a researcher and curator. Studies in art history, media theory, philosophy and aesthetics at HfG Karlsruhe and Universidad Autónoma de Madrid. His research and curatorial practice is focused on the relations between aesthetics and the social sphere. Consequently, he is interested in areas linked to activism, gender, historical avant-gardes as well as participative architecture. In 2008 he edited two books for One Star Press (Paris): "Renaud Auguste-Dormeuil: Fin de représentation" and "Lia Perjovschi: Sense." and has written for different magazines, among others PAVILION, Cura, Displayer and AFI. Felix Vogel gave lectures in institutions such as Index (Stockholm), Evento (Bordeaux) and PAVILION UNICREDIT (Bucharest). He taught workshops and seminars at HEAD Geneva, Free Academy Bucharest and 1.Curatorial Symposium Sofia/Plovdiv. â€¨Felix Vogel lives and works in Berlin.

ARTISTS
The curator of BB4 has selected 37 participants/artists from 19 countries, who will show works produced between 1935 and 2010 and some of them specially for BUCHAREST BIENNALE.

LOCATIONS
Each of the 6 locations chosen for the BB4 are justified by their history, socio-political involvement, but also by the topographical location: Centre for Visual Introspection, The Geology Museum, LaBOMBA, PAVILION UNICREDIT - centre for contemporary art and culture (where the info-point will be located), Political Science Institute, ParadisGaraj

PUBLICATIONS
PAVILION - journal for politics and culture will dedicate a special issue to the Biennale with contributions by all the artists and texts by Felix Vogel, Bruno Latour, Chantal Mouffe, Maria Muhle, Ludger Schwarte, Reinhold Martin, Hito Steyerl, Eugen RÄƒdescu, Wu Ming, Julia Brotea and Daniel Béland, Andrei CrÄƒciun, Antonio Negri, Doina Petrescu, RÄƒzvan Ion, Peter Osborne.
A mini-guide will be published to be a handy instrument for navigation through the biennale.
The journal and the guide can be ordered soon from www.pavilionjournal.org or can be directly purchased from the info-point of Bucharest Biennale 4.

SIMULTANEOUS PARALLEL EVENTS
A wide range of lectures, debates, performances and other parallel events will take place especially during the opening days and during the whole course of Bucharest Biennale 4. Among the opening days are lectures by Chantal Mouffe and Maria Muhle as well as a parallel exhibition project with HEAD Geneva. From June 25 and 26 an international conference on "Comparative Art History: The Biennale Principle" will take place in collaboration with the Swiss Art History Institute; speakers include Beat Wyss, Zdenka Badovinac and other renowned scholars and curators.

For all the parallel events of BB4, details and venues please got to:
http://www.bucharestbiennale.org/parallel.html

13.00 - 19.00
BB4 PREVIEW
The biennial with all venues will be open exclusively for press and professionals based on accreditation only.
Details and program: The mini-guide and the reader of the BB4 can be downloaded in PDF format from http://bucharestbiennale.ro or purchased at the info point or at the press conference.

22.00 - 04.00
OPENING PARTY
@Club Control (19 Academiei St. in Victoriei Passage)
Live concert
22.30 THE PIXELS
After concert
special DJ set by
DJ SASHA
Please bring the printed invitation with you for access to the party venue (you can get it from the info-point).
Invitation for two.