Monumental paintings and drawings by Patrick Graham will be featured in a major exhibition of Graham's most recent works as well as a number of the artist's most iconic, large-scale paintings of the last 25 years. Also shown will be a rare exhibition of drawings by Arshile Gorky. This drawings reveal Gorky's early ruminations on cubism and biomorphic abstraction, well before his encounter with the European expatriates who arrived in N.Y. during WW II. 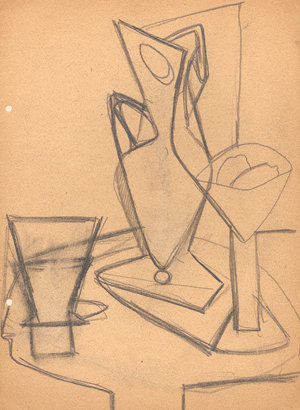 Los Angeles, CA - Jack Rutberg Fine Arts will present two timely and concurrent exhibitions in Los Angeles opening May 22. Monumental paintings and drawings by Patrick Graham, widely regarded as Ireland's most important contemporary artist, will be featured in a major exhibition of Graham's most recent works as well as a number of the artist's most iconic, large-scale paintings of the last 25 years. Also shown will be a rare exhibition of drawings by Arshile Gorky (1904-1948), the Armenian-born artist; one of the 20th century's most important painters and seminal forces of American modern and contemporary art. Both exhibitions will open May 22, with Patrick Graham in attendance, in a much anticipated appearance in Los Angeles.

'Patrick Graham - fact of the matter

'Patrick Graham - fact of the matter' offers a rare opportunity to view a major presentation of Graham's works; some recently exhibited in the critically acclaimed museum exhibition 'The Quick and the Dead' presented by the Dublin City Gallery The Hugh Lane. The exhibition is accompanied by a hardcover publication produced for this exhibition, with insightful and provocative essays by art historians and critics, Marlena Donohue and Peter Frank, and Jack Rutberg. In addition, a related educational program, 'A Conversation with Patrick Graham' is scheduled for Wednesday, May 26 at 7:30 p.m., with advance reservations highly recommended, as standing room-only crowds have marked Graham's rare, previous talks to art audiences in L.A.

Patrick Graham has been credited by art historians with changing the face of Irish painting, bringing it into the 20th and 21st century, and has been recognized by Ireland as a 'living national treasure' through his induction into Aosdána since 1986. His impact on Los Angeles artists has been dramatically felt on those rare occasions when his works have been exhibited; the last time in 2002. Artists are conspicuously noted among Graham's collectors. Critical praise has been no less noteworthy.

Art critic Donald Kuspit has declared: 'Patrick Graham's paintings are masterpieces...on a grand physical, emotional and intellectual scale...they are among the most complicated, salient reflections on modern existence that have been made...' And critic Peter Frank has observed: 'In Graham, Ireland finally has a painter-draughtsman to match its writers.'

Opening in conjunction with the Patrick Graham exhibition will be a rare exhibition of drawings by one of the most pivotal and significant 20th century American painters, Arshile Gorky (1904-1948). 'Arshile Gorky: sketchbook drawings' will feature Gorky's early sketchbook drawings dating from the early 1930s. It was during that period when Gorky absorbed and re-defined European avant-garde sensibilities, having at that time a profound impact upon such artists as Willem deKooning, Hans Burkhardt, Stuart Davis, John Graham, Isamu Noguchi and what ultimately became known as the New York School.

The drawings in this exhibition reveal Gorky's early ruminations on cubism and biomorphic abstraction, well before his encounter with the European expatriates who arrived in N.Y. during WW II. These preliminary, yet informative drawings originated from the collection of the artist, Hans Burkhardt. When Hans Burkhardt (b.1904 Basel, Switzerland - d.1994 Los Angeles) left New York late in 1937, after sharing Arshile Gorky's studio for nearly nine years, he brought to Los Angeles the largest holdings of works by his friend and mentor, outside Gorky's own holdings. Burkhardt was the first to introduce Gorky's work to other artists and curators in L.A. and his collection was the subject of a number of Gorky museum exhibitions. That back-story to Los Angeles' connection to Arshile Gorky is underscored by the Philadelphia Museum of Art's recent inclusion of a poignant painting by Hans Burkhardt entitled 'Burial of Gorky' 1950, in their recent exhibition 'Arshile Gorky in Context' which ran concurrently with the PMA's major retrospective, 'Arshile Gorky: A Retrospective.' The painting now resides in the permanent collection of the Philadelphia Museum of Art.

Drawings in this exhibition are offered following their inclusion in several museum exhibitions throughout the country. They were the subject of the last publication on Gorky's works by the late Gorky scholar, Melvin P. Lader, Arshile Gorky: The Early Years published by Jack Rutberg Fine Arts in 2004.

Arshile Gorky: sketchbook drawings will open May 22, to run concurrently with the major exhibition, 'Arshile Gorky: A Retrospective' opening the following week at the Museum of Contemporary Art (MOCA) in Los Angeles, following its recent exhibition at the Tate Modern, London and the originating museum, the Philadelphia Museum of Art.

A Related Educational Program Will Feature 'A Conversation with Patrick Graham' Wednesday, May 26, at 7:30 p.m.
RSVP is Requested. Admission is Free.