The exhibition is the first British gallery showing of Doubletake which, like Dial H-I-S-T-0-R-Y, mixes film, television and documentary footage, fact and fiction, to make a complex blend of meanings and counter-meanings, this time held together by a narrative written by British novelist Tom McCarthy in adaptation of Jorge Luis Borges's novella The Other where Borges imagines an encounter with his own aging self. 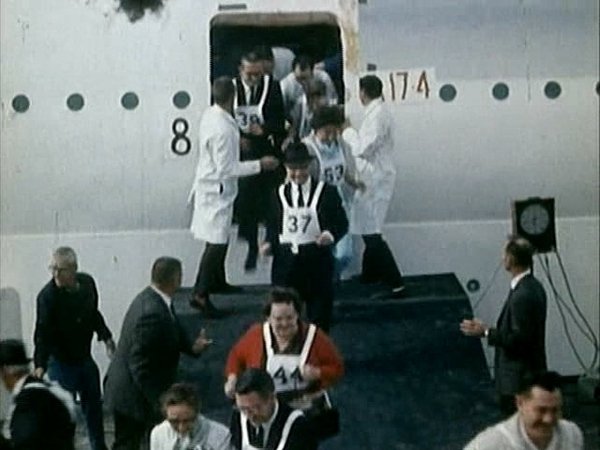 Belgian artist Johan Grimonprez was propelled to international prominence when his highly acclaimed one-hour video Dial H-I-S-T-0-R-Y, a smart, visually complex and imaginatively compelling cultural history of aeroplane hijackings, was first shown at Documenta X in 1997. In 2008, a first version of his new film Doubletake took the Basel art fair by storm.

This exhibition is the first British gallery showing of Doubletake which, like Dial H-I-S-T-0-R-Y, mixes film, television and documentary footage, fact and fiction, to make a complex blend of meanings and counter-meanings, this time held together by a narrative written by British novelist Tom McCarthy in adaptation of Jorge Luis Borges’s novella The Other where Borges imagines an encounter with his own aging self.

The film charts the global rise of fear-as-commodity in a tale of odd couples and double deals that casts Hitchcock’s work and persona as central to and reflective of a world in flux. It skips, or to use Grimonprez’s word zaps, from image to image and from plot to plot, weaving together footage from the kitchen debate between Kruchev and Nixon and the presidential debates between Nixon and Kennedy; the space and technology race; Folgers coffee advertisements; episodes from ‘Alfred Hitchcock Presents’; reports of the Cuban Missile Crisis and an account of a fictional encounter between Hitchcock and his double on the set of The Birds.

Doubletake will be shown together with Dial H-I-S-T-0-R-Y and two earlier films, Kobarweng or Where is Your Helicopter, 1992 and the multi-screen installation It Will Be Alright If You Come Again, Only Next Time Don’t Bring Any Gear, Except A Tea Kettle, 1994. A sustained presentation of the work of this important international artist, the exhibition offers the chance to trace the development of his interest in the power of popular culture to create new mythologies and cultural narratives.

Notes for editors
Johan Grimonprez lives and works in Brussels and New York. He was born in Roeselare, Belgium in 1962 and studied at New York’s School of Visual Arts and attended the Whitney Museum Independent Study Program.
A book will be published to accompany this exhibition, This major book will feature many new pieces of writing on his work by writers and scholars including Jodi Dean, Dany Nobus – Catherine Bernard and Tom McCarthy, as well as bringing together scripts and texts from films, interviews and seminal previously published texts on Grimonprez’s work.
The Fruitmarket Gallery aims to make contemporary art accessible, without compromising art or underestimating audiences.

The Gallery presents world-class, thought-provoking and challenging art made by both Scottish and international artists in an environment that is welcoming, engaging, informative and always free. The Gallery aims to give audiences the confidence to enjoy contemporary art and to understand the importance of art, artists, culture and creativity, and their impact on individual and collective lives.

The Gallery’s creative programme includes exhibitions, commissions, interpretation, education and publishing in both print and electronic forms. Gallery facilities include a bookshop and a café. The Gallery is physically accessible and family friendly.