Superflex / Darryl Lonsbrough / Junkman / We Have The Mirrors 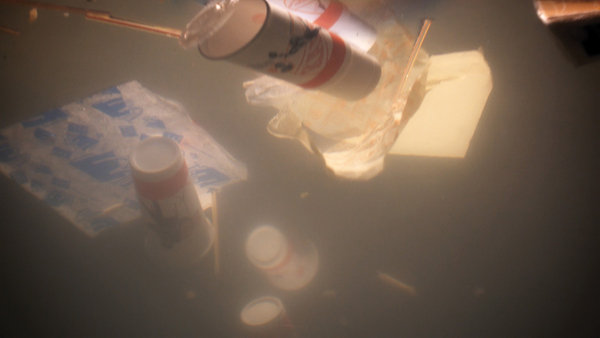 Like many before him, photographer Darryl Lonsbrough returned to his native north Wales after making a career elsewhere. Taken in and around the strip traced by the north Wales coast railway line, the large-scale colour photographs in Along The Line depict familiar places seen through eyes distanced by time. Familiar yet strange – Lonsbrough finds those in-between spaces which are ignored, unnoticed, unloved, but are as much a part of our contemporary culture and society as the picture postcard views of 'beautiful north Wales', and which we recognize but could be almost anywhere.
Works from Along The Line will be on long-term display in the café and meeting room with the selection changing from time to time.
The artist has been supported by the Arts Council of Wales in developing new work for Along The Line.

Presenting the un-presentable; valuing the worthless; appreciating the depreciated; taking the outcasts inside; embracing the untouchable: this is the Junkyard Museum of Awkward Things as described by its creator, the self-styled 'Junkman From Afrika'. As Dilomprizulike, he was named by the Independent newspaper as one of the fifty greatest cultural figures shaping his native continent. Junkman he will spend three months in residence at Mostyn, constructing the Junkyard Museum at the Mostyn, the first time it will have been seen outside Nigeria.

This unique 'museum' has been described as a 'kind of artistic hospital' in which the discarded object is resuscitated and brought back to a second life as art. As well as touching on ecological issues, the Junkyard Museum of Awkward Things is a reflection on people's sense of rejection by and isolation in a consumer society which values disposability. The use of discarded materials has particular artistic resonance in Africa, and Dilomprizulike is among the most inventive of those who make their art out of the continent's detritus.

Using materials which he will find locally, and working with educational groups and the public, the artist will build the Junkyard.

Museum during a three-month residency starting in early May before Mostyn reopens. The installation will take shape in a new gallery space close to Mostyn's noted shop, a juxtaposition with the commercial that will give it additional poignancy and will underline differing cultural attitudes towards consumption and the possession of objects.

Following completion and the end of the Junkman from Afrika's residency, the work will remain on display until 16th October.

A McDonald's burger bar, ready to dispense its fast food, but deserted. Water trickles under the door, forms an expanding pool on the floor, rises. As the water rises trays drift off tables, electrics short circuit, plastic cups and other detritus turn in the current, and a horizontal Ronald McDonald bobs disconcertingly about his abandoned domain. Finally and completely underwater, ghostly submerged chairs float amidst the accumulated debris of the fast food outlet. We have a flooded McDonald's.

Thought-provoking, beautiful and sometimes foreboding, Flooded McDonald's takes a novel view of issues such as climate change and consumerism, and is the first presentation in Wales of work by Danish collective Superflex. In projects around the globe over the past fifteen years, their particular economic and political awareness has resulted in large-scale installations, long-term process-based projects such as installing a small bio-gas plant in rural Tanzania, publications and, more recently, films.

The effect of Flooded McDonald's is haunting and the work itself has an unexpected beauty. At the same time it is a thoughtful meditation on global capitalism's relationship to ecological concerns of the most fundamental nature, showing a younger generation of artists unafraid to tackle the most pressing issues of our time.

Flooded McDonald's was co-commissioned by Mostyn, the South London Gallery, the Louisiana Museum of Modern Art (Denmark), with generous support from the Danish Film institute. It was directed by Tuan Andrew Nguyen and Superflex.

The exhibition is supported by the Danish Arts Council's Committee for international Visual Art and The Royal Danish Embassy.

Forming the centrepiece of the new programme, We Have The Mirrors, We Have The Plans is the first installment of a new and bold initiative to make an ongoing assessment of the very best developments in contemporary art in Wales. It opens a new chapter in the history of the gallery, providing a timely opportunity to question what the aims and ideals of an institution of contemporary art might be, making full use of the new elegant galleries.

Occupying four of Mostyn's five galleries and with the participating artists nominated by six regional advisers, We Have the Mirrors, We have the Plans is cross-generational and includes painting, drawing, sculpture, installation, text, video and sound pieces.

Celebrating the diversity of art being made in Wales, it articulates a new national aspiration for the Mostyn. That what artists do reflects society or even foreshadows what society does tomorrow is a compelling notion. Wood's text and the exhibition's title suggest also an ironic nod at the manifestos and utopian/dystopian visions that litter modern and contemporary art history.
The catalogue essay examines the links between the artists' thinking and a wider history of ideas.

We Have The Mirrors, We Have The Plans has been developed with the generous support of The Peter Moores Foundation and is accompanied by a publication made possible by the support of The Colwinston Charitable Trust.

Llandudno is just three miles off the A55 coastal expressway and the London- Holyhead main rail line. The Mostyn is 200 meters from Llandudno Train Station.