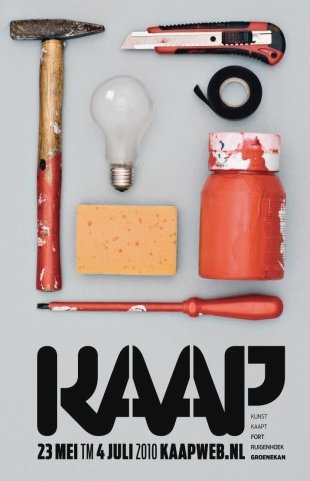 Kaap is an exhibition of contemporary art consisting of new works made for the whole family. The exhibition will be open to the public from 10 a.m. to 6 p.m. on every weekend from 23 May to 4 July as well as on Whit Monday.

Ten works by artists from all over the world
This, the fifth edition of Kaap, includes ten works of art made artists from many different countries. The idea of Kaap is that artists can find inspiration in the challenge of making work for children and in bringing out the essence of their art with absolute clarity. The work made for Kaap typically invites its public not just to look but also to take part.

Become a performer at the Dada Café by Kevin Immanuel, get a taste of Fort Ruigenhoek in Fort Beleg (“Fort Sandwich”) by Wietske Maas, build your own fortifications in the Art Deco Bunker Workshop by James Beckett, check your vision in Eye level by Yael Davids, wonder at the scorched stone shapes of Trinity – Firing Abstraction by Maura Biava, take a peek into the greenhouse of Tamás Kászas, play the musical instruments made for TITA TOITU by Folly Teko, take part in the amazing rituals of Good Morning by Nina Yuen, join the characters of Yeondoo Jung’s dreams on an imaginary journey in Bewitched, mount a bicycle and jump through the hoops of Saskia Janssen and see her feathered friends in Cinema for Birds.

The fort location
Kaap is pure adventure, a trip of discovery through the bunkers and the greenery of Fort Ruigenhoek. The historic fort, which forms part of the 17th century New Dutch Waterline, lies on an island surrounded by open countryside. The bunkers and other buildings lie half-buried in grass, shrubs and trees.

Kaap is an initiative of Stichting Storm. This foundation works closely with artists and theatre makers on projects aimed at a youthful audience. Among other things Storm organizes the Tweetakt theatre festival in Utrecht.