The project by Bianconi comprises an installation and a performance, both with the same title. The artist's work has evolved as an unrelenting analysis of the relationship between the uniqueness of the ego and multiple identities. 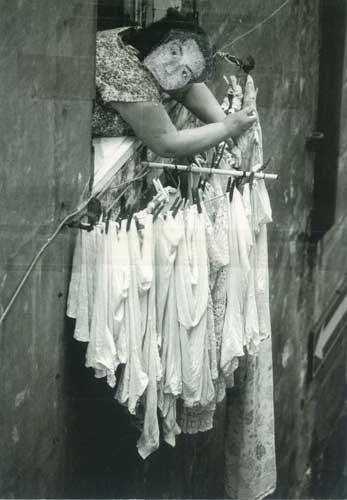 'You Always Go Down Alone', a project by Andrea Bianconi developed for Vernon Projekt comprises both an installation and a performance with the same title.

Bianconi's work has evolved as an unrelenting analysis of the relationship between the uniqueness of the ego and multiple identities. Departing from autobiography, this analysis has progressed to speculative reflections on the human being in his/her individual and social components.

In his installation 'You Always Go Down Alone', various objects are fastened to 100 pieces of string, woollen threads, and wires to form rain descending from the ceiling of the space. The 'falling' objects become divinatory charms, which mark the memory of a personal experience that takes place somewhere between materiality and spirituality. This raining 'objects/charms' is an objectified representation made up of entities that are both isolated and mutually related, and each stream is very close to the other, resulting in a kind of encounter between different realities.

'You Always Go Down Alone' is a dichotomy of the public-self and the private-self. It is a dream-like journey that blurs the boundary between the conscious and the subconscious, between time and space.

The human being on a journey - upwards or downwards?

Andrea Bianconi (1974, Arzignano, Italy), lives and works in Brooklyn, NY and his performance 'You Always Go Down Alone'

The Italian artist Andrea Bianconi is not unknown to the Czech public. At the TINA B. festival in Prague in 2009 he staged his site-specific installation called 'A Charmed Life', which was accompanied by a performance of 'Sound of a Charmed Life'. This is very typical for Bianconi. He extends the material work with his own presence as a kind of postscript. At the pre-opening the artist will also present a performance titled 'You Always Go Down Alone'. In this short show, various bodies will be thrown, becoming the rain that emerges from the floor. The 'falling' bodies (made with blue tape, each one different from the others with regard to the body, but each the same with regard to the face, that is the face of the artist) are a reflection on the human condition and a comment on the social condition. Man is depicted as a bundle of conflicting tensions, with emphasis on the feeling of an out-of-control interaction and ' therefore' of loneliness.