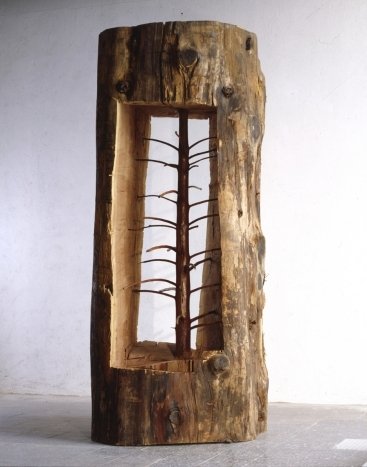 Never before has the "Steiner cosmos" been as comprehensively portrayed as in the two parallel exhibitions "Rudolf Steiner and Contemporary Art" and "Rudolf Steiner - Alchemy of the Everyday." This large-scale, two part project takes up a phenomenon that has only attracted little attention in the past, but which is among the most exciting chapters in modern art and intellectual history. Major artists ranging from Wassily Kandinsky and Piet Mondrian to Joseph Beuys regularly occupied themselves with Rudolf Steiner’s universal world of ideas and drew valuable impulses from them for their work. With the start of the twenty-first century, this link has a received new brisance resulting from the increasing interest contemporary artists have been showing in Steiner. Against the backdrop of the lively debates regarding ecological responsibility, the religious search for meaning, and an economic system that has spun out of control, the integral world view such as Steiner’s is simultaneously experiencing growing attention.

The part of the exhibition entitled "Alchemy of the Everyday" assembled by the Vitra Design Museum examines the impact of this central twentieth-century reformer in the fields of architecture, art, and society. It is the world’s first comprehensive retrospective dealing with Steiner outside an anthroposophical context. The exhibition "Rudolf Steiner and Contemporary Art" organized by the Kunstmuseum Wolfsburg in collaboration with the Kunstmuseum Stuttgart attempts to unlock Steiner’s Universalist world of ideas based of the works of fifteen present-day artists.

We would like to thank the Steiner-Archiv and the Kunstsammlung Goetheanum in Dornach for helping us with our research. The exhibitions are supported by Volkswagen Financial Services AG and by the German Federal Cultural Foundation.

This unique constellation of contemporary art and integral world view can be experienced sensually in this project by means of a very special concept. Artworks by renowned contemporary artists who themselves do not come from an anthroposophical context such as Tony Cragg, Olafur Eliasson, Helmut Federle, Anish Kapoor, Meris Angioletti, and Bernd Ribbeck enter into a dialog with Rudolf Steiner’s aesthetic and philosophical world of ideas. The approach takes place by means of evocative juxtapositions: approximately 65 sculptures, paintings, objects, video projects, and installations conceived especially for the exhibition are confronted with approximately 30 drawings, objects, models, documents and blackboard drawings from the Rudolf Steiner Archive at Dornach which Steiner made over the course of his more than 5000 lectures.

This encounter with Rudolf Steiner’s spiritually and ethically coded world of ideas offers a two-fold opportunity: It firstly makes a wide-ranging as well as universal construct available to contemporary art that focuses on the human being and his relationship to nature and the cosmos. And secondly, contemporary art’s independent point of view helps unconventionally reveal Rudolf Steiner’s impulses that have from time to time grown rigid by means of some all too constricted interpretations – a "de-monumentalized Steiner," as it were.

One of the first to make Steiner relevant again for the present day was Joseph Beuys. In a letter from 1971, he wrote that he had "just received a commission from him (Steiner) to gradually clear away the people’s estrangement and mistrust as regards the transcendental in my own way." Beuys took up Steiner’s reform ideas and his linking of life and art, transforming them into his concept of "social sculpture." As opposed to this direct artistic "progeny," the diversity of the references in the approaches of the younger generation demonstrates the universal versatility of the "Steiner cosmos." In their cross-border, technical installations, Olafur Eliasson and Carsten Nicolai have brought the connection between art and science up to date that was separated in the materialist age after Goethe. The nature-oriented art of Mario Merz and Giuseppe Penone, for example, demonstrates Steiner’s forerunnership in matters concerning environmental awareness. Spectacular is a 15 meter high, colored sculpture made especially for the large hall by Katharina Grosse that impressively translates Steiner’s concept of "thinking in colors and forms" into the space.

Anish Kapoor translates Steiner’s concept regarding the multiple world of body and soul consciousness for our time. The Anglo-Indian artist designed a massage room where the visitor can have themselves massaged. It is well known that many people perceive various colors while their body is being massaged. Kapoor heightens this sensual, spiritual experience, spelling out Steiner’s recognition that we do not only live in one world of consciousness, but in various ones: in the physical as well as in a spiritual one that we can experience with our own "ethereal body."

The invited artists were enthusiastic about being asked about this connection despite the fact that they developed their own artistic concepts as autonomous works completely independently from an anthroposophical context. It does not concern demonstrating causal influences from Steiner, but rather a dialogue on a level playing field in which Steiner can be seen with fresh eyes. The list of names includes contemporary artists who would conversely probably interest Rudolf Steiner today.

The Kunstmuseum Wolfsburg is located just a stone’s throw away from Berlin, one of Rudolf Steiner’s main bases of operation. The Goethe expert came in 1897 from Weimar to the Prussian capital where he founded the Anthroposophical Society in Cologne 1912 before making the village of Dornach in the Canton of Jura, Switzerland, into the world headquarters of the most influential reform movement. Surprisingly, there are several ties between the industrial city of Wolfsburg and the spiritual colony on the "hill" near Basel. Hans Scharoun’s theater for Wolfsburg was inspired by the Goetheanum erected by Steiner in Dornach between 1924 and 1928, one of the icons of modern sculptural architecture, as were Alvar Aalto and Zaha Hadid who likewise built key works in Wolfsburg.

After "ArchiSkulptur" in 2006, "Japan and the West" in 2007 and "James Turrell" in 2009, the project represents a further milestone in the Kunstmuseum’s new contentually weighted program devoted to the "Future of the 21st Century" and provides Wolfsburg’s contribution to the increased interest in religious, ethical and social themes in contemporary art.

The exhibition is supported by Volkswagen Financial Services AG.