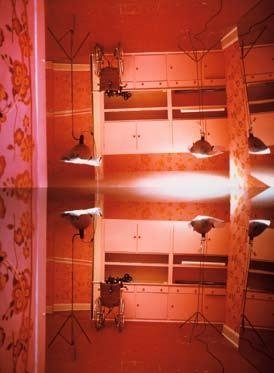 Hauser and Wirth is proud to present an exhibition of new and recent work by Los Angeles-based artist Rachel Khedoori. For her first solo exhibition in London, Khedoori will present 'The Iraq Book Project', as well as a photographic series and a film installation featured upstairs in the American Room. Since the mid 1990s, Khedoori has created complex investigations weaving together architecture, sculpture and film. She often uses constructed elements and mirrors alongside film projections, creating works that can be explored both physically and psychologically.

'The Iraq Book Project', Khedoori's ongoing documentary piece, consists of a chronological compilation of news articles found online using the search terms 'Iraq', 'Iraqi' or 'Baghdad'. The articles begin on 18 March 2003, the start date of the Iraq war, and in theory, can continue indefinitely. Presented as a series of large books on tall tables, the articles are sourced from a wide range of news services based all over the world, translated into English and formatted to flow together seamlessly; the only separation between the articles is the emboldened lettering of the titles, date and source. For this project, the gallery will be turned into a research centre with articles being compiled, printed and added to the books throughout the duration of the exhibition. 'The Iraq Book Project' is an attempt to find words for an indescribable event, highlighting the way in which perceptions of an event change depending upon time and place.

Throughout her artistic practice, Khedoori has interpreted landscape as a place where one's memories are stored. Khedoori's new film installation is a technically simple work consisting of a pan of an Australian landscape projected onto a screen placed at a 90 degree angle to a mirror of the same size. The point where the projection and the mirror meet draws the viewer in, giving the illusion of an image that is continually peeling away from itself. The doubling of the image caused by the projection and adjacent mirror is reminiscent of a Rorschach test which has the effect of simultaneously morphing one's perception of the landscape and the film projection itself.

Rachel Khedoori was born in Sydney, Australia in 1964 and has been living and working in Los Angeles since 1990. She gained international recognition in 2001 with her first comprehensive solo exhibition at Kunsthalle Basel, Switzerland, and Kunstverein Braunschweig, Germany. She has since participated in numerous important group exhibitions and biennials including 'Paul McCarthy’s Low Life Slow Life: Part 2', CCA Wattis Institute of Contemporary Art, San Francisco CA (2009), 'Fare Mondi/Making Worlds', La Biennale di Venezia (2009) and the travelling exhibition 'Blickmaschinen/Visual Tactics or how pictures emerge' which opened at Museum für Gegenwartskunst, Siegen, Germany (2008).