The Work of Rafael Ferrer

Retro/Active. The travelling retrospective, curated by Deborah Cullen, includes approximately 100 works from the mid-1950s to the present in a vast variety of media including collage, sculpture, painting, drawing, photography, and mixed-media, and engages language, topical news, and artistic events culled from newspapers and magazines to express his sharply critical, witty observations. The show is part of El Museo's Focos series, which highlights the work of mature, under-recognized, and groundbreaking artists. 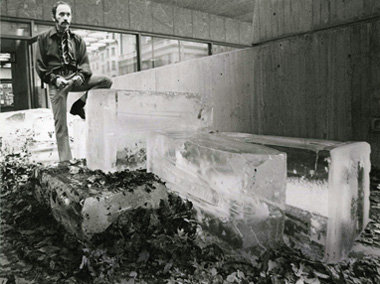 El Museo del Barrio is proud to announce that Retro/Active, The Work of Rafael Ferrer, the first solo exhibition in a museum to examine the breadth and depth of the artist's influential production over the last 55 years, will be on view June 8 – August 22, 2010. The travelling retrospective, curated by Deborah Cullen, Director of Curatorial Programs at El Museo del Barrio, includes approximately 100 works from the mid-1950s to the present in a vast variety of media including collage, sculpture, painting, drawing, photography, and mixed-media. It is part of El Museo's FOCOS series, which highlights the work of mature, under-recognized, and groundbreaking artists.

"Rafael Ferrer is a greatly important living artist. This expansive retrospective strives to spark a critical re-consideration of his work," notes Cullen. "El Museo is proud to be showing his entire oeuvre, from documentation of his earlier better-known works to his post-1980 creations, for the very first time."

"In many ways, Rafael Ferrer's career reflects El Museo's own history," states Julián Zugazagotia, Director of El Museo del Barrio. "His work both stands within and moves beyond the major art movements of the 20th century—Dada, Surrealism, Abstract Expressionism, Performance Art, Conceptual Art, as well as large-scale, figurative painting. The course of Ferrer's artistic development runs parallel to, but often outside of the art historical cannon, enriching and troubling any preconceived idea of what an artist of Puerto Rican birth is or should be."

A fully illustrated, bilingual exhibition catalogue, with entries covering various thematic aspects of the artist's work by guest authors, as well as chronology, accompanies the exhibition. Included in the catalogue is an introduction by Zugazagoitia; an introductory overview by Cullen; as well as essays by Edward Sullivan, Vincent Katz, and Carter Ratcliff. The retrospective will be augmented by a forthcoming biographical monograph on Rafael Ferrer, authored by Cullen for the UCLA Chicano Studies Research Center as part of the A Ver: Revisioning Art History series.

About Rafael Ferrer
Rafael Ferrer was born in Santurce, Puerto Rico in 1933, and from an early age was exposed to international groups and artists in Puerto Rico, New York, and Los Angeles. He attended Syracuse University where he focused on playing jazz timbales. Upon his return to the island in 1953, he studied painting with the exiled Spanish surrealist, Eugenio Fernández Granell, at the Universidad de Puerto Rico. Ferrer joined Granell in Europe during the summer of 1954, where he met Wifredo Lam, as well as André Breton, Benjamin Peret, and other renowned artists associated with the Surrealist movement. This trip would have great influence and long lasting impact on his oeuvre.

After notorious and critically-excoriated exhibitions of collaged paintings, environments, and welded steel combines in Puerto Rico during the early and mid-1960s, Ferrer moved to Philadelphia in 1966. The artist began to carry out ephemeral "actions" and to create improvisational sculpture with chain link fencing, corrugated steel, neon tubing, leaves, ice, hay, and grease. Ferrer became internationally recognized between 1969 and 1971 for his participation in seminal "postminimalist" exhibitions, including: Anti-Illusion: Procedures/Materials (Whitney Museum of American Art, 1969); Live In Your Head: When Attitudes Become Form, Works-Concepts-Processes-Situations-Information (Bern Kunsthalle, 1969); and Information (Museum of Modern Art, New York, 1970). His 1968 and 1970 exhibitions at Leo Castelli's Warehouse, 1969 and 1970 solo exhibitions in Essen and Amsterdam, and his Deflected Fountain as part of a 1970 Duchamp homage at the Philadelphia Museum of Art sealed his reputation within the avant-garde. His attempts to bring the New York avant-garde to the island were again, critically misunderstood and his relationship with his birthplace continued to be fraught.

During the early 1970s, Ferrer began creating room-sized installations that were more poetic, literary, and allusive. Building off his earlier use of natural and industrial materials he continued to incorporate ephemeral elements in his work such as found objects, neon and either painted or printed imagery. Madagascar (Pasadena, 1972); Museo (MCA Chicago, 1972); Deseo (Contemporary Art Center, Cincinnati, 1973); and Isla (MoMA-Project Room, 1974) all stem from this period. While Ferrer had previously been colleagues of artists such as Robert Morris, Yvonne Rainer, and Alan Saret, his travels introduced him to other groups that were to have a direct impact on his subsequent work. He became friendly with Claes Oldenberg, the Chicago imagists including Roger Brown, and several of the American "New Image Painters," including Neil Jenney and Alex Katz.

Ferrer developed various long-standing series in the 1970s. In this period, he received several NEA Fellowships and a Guggenheim Foundation Grant. Nonetheless, through his change of format, his work began to be positioned outside of the cutting-edge, and pigeonholed within several "Latin American" projects as well as along "primitivist" and "intuitive" lines. His ongoing series included Maps (approximately 100 drawings on printed maps and navigational charts); Faces (over 500 visages drawn on paper bags of various sizes); Kayaks and Constructions (assembled and painted, often hanging, sculptures). In the mid 1970s, Ferrer began creating intimate and magically-named Tents, with painted sides and often with a crowning word over the portal.

He was excited to observe Katz painting from life while vacationing in Puerto Rico, and soon he returned to painting. In 1980, Ferrer began his nearly 20-year engagement with large-scale Painting (1980-1997), incorporating portraits, nudes, musicians, nightclub and cockfight scenes, landscapes, and scenes in the Dominican Republic where he lived and worked part-time. He also produced homages to various artists, including Wilfredo Lam, David Smith, Alberto Giacometti, and Giorgio Morandi.

Despite the fact that Ferrer remained consistently engaged with, and responsive to, the changing trends of the larger art world around him, his involvement with large-scale painting has never been considered alongside American "New Image Painting" or Italian transavanguardia or German Neo-Expressionism. His entire body of work after 1980 has never been critically recognized or examined together with his earlier, better-known production. This retrospective will, for the first time, note the continuities of Ferrer's interests and themes over his lifetime.

During his long career, Ferrer has created artist's books, fine prints, and has had major public art commissions in the Bronx (1979), Philadelphia (1982), and Puerto Rico (2004). Currently, his smaller-scale work involves drawing, collage and mixed-media on paper and canvas, and engages language, topical news, and artistic events culled from newspapers and magazines to express his sharply critical, witty observations.

Rafael Ferrer's work has been acquired by prominent private and public collections, including The Metropolitan Museum of Art, The Museum of Modern Art, and The Museum of Contemporary Art, Chicago, yet his contributions remain outside of U.S. or western art histories, as well as the standard histories of Puerto Rican and Latino contemporary art.

Credits
Lead sponsorship support for Retro/Active, The Work of Rafael Ferrer is generously provided by JP Morgan. Additional major support has been provided by The Andy Warhol Foundation for the Visual Arts.

Opening on June 8, 6pm-8pm, in celebration of Museum Mile Festival