National Museum and Gallery of Wales


National Museum and Gallery of Wales

'A Select Retrospective' is the first major exhibition of Ceri Richards' work in twenty years. Curated by critic and writer Mel Gooding, the exhibition is organised to focus on the musical and poetic themes that influenced Richards' career over nearly four decades. 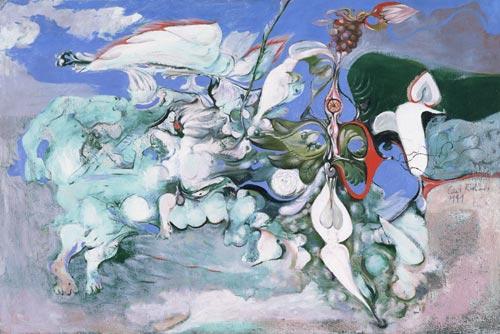 One can say that all artists - poets, musicians, painters - are creating in their own idioms, metaphors for the nature of existence, for the secrets of their time. Ceri Richards

'Themes and Variations: A Select Retrospective' is the first major exhibition of Ceri Richards' work in twenty years. Curated by critic and writer Mel Gooding, the exhibition is organised to focus on the musical and poetic themes that influenced Richards' career over nearly four decades.

Born in Wales in 1903 and trained at the Swansea School of Art and Royal College of London, Ceri Richards is recognised as one of Britain's most significant artists of the twentieth century.

Poetry and music were abiding passions, providing subjects and themes throughout his life, and the exhibition will include many of his most exuberantly lyrical and powerful works from the 1940s to the 1960s. Richards made many works directly inspired by the poetry of Dylan Thomas, returning repeatedly to the theme of the National Museum's great Cycle of Nature of 1944. In the late 1950s he worked on a magisterial series of semi-abstract seascapes inspired by Debussy's prelude La Cathedrale Engloutie.

Richards' work drew directly on the major art movements of his time, assimilating aspects of Cubism, Abstraction and Surrealism, but always retaining his individuality. His relief constructions and paintings from the 1930s are thought of as among the best European art of the period.

Mel Gooding, exhibition curator writes: "Few artists of his time have encompassed such oppositions of subject, theme and mood. Richards's extraordinary versatility enabled him to shift styles and to treat his subjects with a dazzling virtuosity. His work is characterised by the recurrence of themes and ideas constantly associated with related visual motifs and symbols: the female form, musical instruments, the arabesque, rock and plant formations, seed-pod and flower, sun and moon."

The exhibition will also include documentary information, photographs, sketchbooks, drawings, recordings of music and poetry as well as archive footage of an interview with the artist by John Ormond during the '70s.

The exhibition coincides with the publication of Ceri Richards, (Cameron & Hollis) a major new monograph on the artist by Mel Gooding, which will be launched a the National Museum & Gallery , 25 July 2002.