The FIFA World Cup is the most important and widely watched sporting event in the world and will run this year from June 11 - July 11, 2010, in South Africa. The germinal idea for the show is very simple: to create the perfect football environment, a sort of mini-soccer paradise at apexart for watching games. Around the games themselves, there will be talks, events, and a series of works, objects, and activities that will expand the spectacle into a more conceptual and sensual rumination on the meaning and significance of football/soccer. 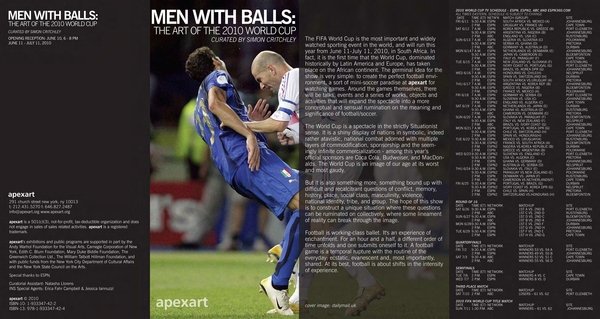 The FIFA World Cup is the most important and widely watched sporting event in the world and will run this year from June 11 - July 11, 2010, in South Africa. The germinal idea for the show is very simple: to create the perfect football environment, a sort of mini-soccer paradise at apexart for watching games. Around the games themselves, there will be talks, events, and a series of works, objects, and activities that will expand the spectacle into a more conceptual and sensual rumination on the meaning and significance of football/soccer.

The World Cup is a spectacle in the strictly Situationist sense. It is a shiny display of nations in symbolic, atavistic national combat adorned with multiple layers of commodification, sponsorship and the seemingly infinite commercialization. It is an image of our age at its worst and most gaudy. But it is also something more, something bound up with difficult and recalcitrant questions of conflict, memory, history, place, social class, masculinity, violence, national identity, tribe, and group. The hope of the exhibition Men With Balls is to construct a unique situation where these questions can be ruminated on collectively.

Football is working-class ballet. It's an experience of enchantment. For an hour and a half, a different order of time unfolds and one submits oneself to it. A football game is a temporal rupture with the routine of the everyday: ecstatic, evanescent, and, most importantly, shared. At its best, football is about shifts in the intensity of experience. And stories will multiply from that experience, stories of heroes and villains, of triumph, and a gnawing sense of the injustice of defeat. The aim of the exhibition is to produce with this show some experience of being together with others in a group, watching a game, waiting for something marvelous, unexpected, and possibly magical to happen. And it will happen.

Let me be entirely honest with you. This show is an act of complete personal indulgence. When the good people at apexart approached me about curating something in their space, they made a huge mistake. After some polite back and forth, Steven Rand said to me directly, 'We'd like you to do something that reflects your passion.' I responded, 'Well, football or what you call soccer is my passion. Its my only religious commitment. The World Cup is coming up soon and I'd like to create a space where we could watch games together.' Amazingly, they agreed.

Let me try and explain why football is so important to me, and why it becomes more rather than less important to me as I get older. My family is from Liverpool in the northwest of England and my father used to train at Liverpool Football Club's training ground in the early 1950s until an ankle injury curtailed his career. Dodgy ankles meant he had to wear Chelsea boots for the rest of his life, although he looked kind of stylish in them.

My mum tells me that I could kick a ball before I could walk and the main plank in my somewhat tempestuous relationship with my dad was football. Until he died late in 1994—indeed during the final weeks of his illness—it was the only thing we talked about sensibly at any length. When we discussed politics, we would always end up shouting at each other. As a kid, I remember long car journeys to and from games where we would analyze every facet of the game in anticipation (on the way there) and reflection (on the way back) with scientific, indeed forensic, detail. I remember crying inconsolably in the car on the way back from an F.A. Cup semi-final when Liverpool had lost badly to a manifestly inferior team on a terrible pitch. Football is all about the experience of failure and righteous injustice. It is about hoping to win and learning to accept defeat. But most importantly, it is about some experience of the fragility of belonging: the enigma of place, memory, and history.

My nuclear unit of a family moved from Liverpool to the south of England, which is where I grew up. We were economic migrants in a part of the country that we didn't recognize and didn't recognize us. Liverpool Football Club came to represent whatever 'home' meant to me and was a huge element in whatever sense of identity we had as a family. Our house was called 'De Kop,' after the famous sloping terrace at Anfield where the hardcore supporters stood and sang. (Weirdly enough, given the location of this year's World Cup, the word 'kop' is short for 'Spion Kop,' which is the name of a hill in Ladysmith, South Africa, which was the location of a battle during the Second Boer War – football is a battlefield.) I made a sign with the words 'De Kop' in my woodwork class at school. It took weeks to make. I remember getting beaten up at elementary school for speaking funny, i.e., with a detectable scouse accent. So, I learned to speak another way, in the sort of anonymous BBC whine that I carry to this day.

I was a decent player, nothing special, but played at county level when I was 10 years old. My dad was very proud and used to come to all the games. Because of the vagaries of the English class system, when I passed the entrance exam to get into a grammar school at age 11, a kind of academic public school that has largely and happily died out, the only sports they played were rugby, hockey, and cricket. These were gentlemen's games because football was considered too working-class. I wasn't allowed to play football, unless in my spare time, and lost any small talent I had.

When my first son, Edward, was born in 1992, my first violent patriarchal act was to decorate his room with Liverpool pennants and other paraphernalia. Like me, he would have had no choice but to support Liverpool. Sadly, the Liverpool team that I grew up with - a team of invincible demigods welded together through the authoritarian will of Bill Shankly, featured in this show, who was coach from 1959 until 1974 – is no more. In the 1970s and 1980s, Liverpool were so good that, Shankly joked, they'd have to bring a team from Mars to beat them.

In 2006, Liverpool were bought by two American sports capitalists: Tom Hicks and George Gillett. Four years later, the team has hundreds of millions of dollars of debt and has just had its worst season for 11 years. I sometimes think I should have let my son support someone else. But football is all about an experience of disappointment in the present that is linked to some doubtless illusory memory of greatness and heroic virtue.

My first memory of the World Cup is when my dad took me to see England play Argentina at Wembley Stadium in 1966. I was 6 years old and this was a big deal. It was a famously tetchy, irritable 0-0 draw that went down in legend because the Argentine captain, Rattin, who had committed grievous bodily harm on a number of English players, refused to leave the pitch when he had been sent off. The games provided the background for three subsequent World Cup encounters between England and Argentina in 1986 (Argentina won, with two goals from Maradonna, one with his hand, the famous 'hand of God' incident), in 1998 (Argentina won again, after a young, impetuous David Beckham had been sent off for retaliation), and 2002 (when England won and Beckham redeemed himself with a winning goal). Reflecting on the 'hand of God' incident and victory over England in 1986, Maradonna, who will coach the Argentine team this summer, said, 'It was as if we had beaten a country, not just a football team... Although we had said before the game that football had nothing to do with the Malvinas war, we knew they had killed a lot of Argentine boys there, killed them like little birds. And this was revenge.' Football is the continuation of war by other means.

The political significance of these victories is vast and deeply ambivalent: in Brazil in 1970 and Argentina in 1978, World Cup victories were used by military governments to fuel nationalist sentiment and the detention and murder of opponents to the regime. In France in 1998, after the extreme right-wing nationalist Jean-Marie Le Pen complained that there were too many black players in the national team, football became the signifier for an emergent French multi-cultural identity. The precise political significance of Zidane's headbutt against Marco Materazzi in the 2006 final is still a source of intense hermeneutical debate. Personally, I wish he'd hit him a little harder.

My most powerful memory of the World Cup is from Mexico, in1970. Brazil won for the third time, which meant that they got tokeep the trophy. This was the team of Pelé, in his fourth World Cup, Jairzinho, Rivelino, Tostão, and Gerson. The names alone had a sort of magical power for me. I would roll them silently around my mouth as I kicked a ball against the wall, as if incanting a spell. The 1970 Brazil team was the greatest attacking team of all time and the side against which any subsequent team (The Netherlands in 1974 or France in 1998) is measured. My mother has a photograph of me wearing a full Brazil uniform.

The World Cup, then, is about ever-shifting floors of memory and the complexity of personal and national identity. But most of all it is about grace. A truly great player, like Pelé, like Johan Cruyff, like Maradonna, like Zidane, has grace: an unforced bodily containment and elegance of movement, a kind of discipline where long periods of inactivity can suddenly accelerate and time takes on a different dimension in bursts of controlled power. When someone like Zidane does this alone, the effect is beautiful; when four or five players do this in concert, it is breathtaking (this collective grace has been taken to a new level by the F.C. Barcelona team in the last few years). But grace is also a gift. It is the cultivation of a certain disposition, some call it faith, in the hope that grace will be dispensed.

The central drama of this show will unfurl as we watch games together. Sometimes it will be like Beckett's Godot where nothing happens twice. But there will be stories. There will be heroes and villains. There will be triumph for a very few and righteous injustice and pain of defeat for the rest of us. What we hope to enact with this show is some experience of being together with others in a group, watching a game, waiting for something marvelous, unexpected, and possibly magical to happen. And there will hopefully be grace.
Simon Critchley © 2010