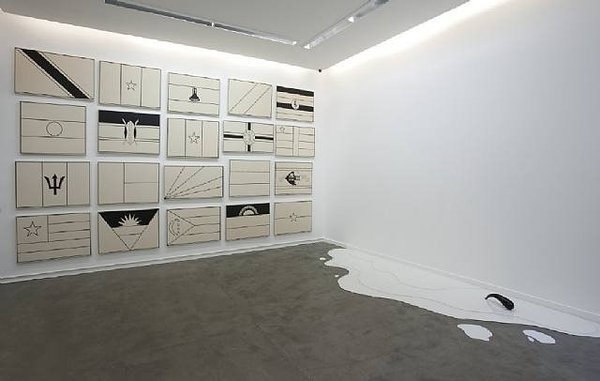 Wilson, born in the Bronx in 1954, has been the subject of numerous exhibitions in museums and cultural institutions throughout North America, Europe and Asia. His work has also been featured in more than one hundred solo and group shows including representing the United States at the 50th Venice Biennale (2003), the Whitney Museum Biennial (1993), and Museum as Muse at MoMA in New York.

Wilson's unique artistic approach is to examine, question, and deconstruct the traditional display of art and artifacts in museums particularly in regard to racial content and cultural assumptions. With the use of new wall labels, sounds, lighting, and non-traditional pairings of objects, he leads viewers to recognize that changes in context create changes in meaning. Wilson's juxtaposition of evocative objects forces the viewer to question the biases and limitations of cultural institutions and how they have shaped the interpretation of historical truth, artistic value, and the language of display. His installation at the 2003 Venice Biennale focused on the history and images of people of African descent from the early years of the Venetian Republic to the present, bringing together Venetian old-master paintings, black murano glass chandeliers, and other Venetian rococo decorative arts.

The present exhibition features works specifically selected by Ami Barak with the intention of illustrating Fred Wilson’s complex relationship to his practice of art within a limited, but immediately visualized, exhibition space transfiguring the artist’s language of institutional critique for the a gallery space.

For instance, the work 'Regina Atra' (2006) is a copy of a diadem made for the coronation of George IV, often worn by Queen Victoria, but perhaps most familiar from the image of the younger Elizabeth II found on banknotes, coins and stamps, only, in this case, constructed of black diamonds. More than a simple reversal of white and black as qualities of aesthetic attractiveness, or even a comment on the exploitation of valuable natural resources by colonial powers, the object provokes a consideration of the symbolic order the slave trade was founded on.

Another work, the bust with a white scarf obscuring the label describing his ethnicity, represents a man called Ota Benga, who was a Congolese pygmie exhibited in the Anthropology Department at the Louisiana Purchase Exposition during World Expo in Saint Louis 1904. Ota Benga—along with the other representatives of "primitive" cultures—was juxtaposed at the world's fair to the heroes and technological feats of the Western industrialized nations. Two years after the fair, he was displayed in a cage with an orangutan at the Bronx Zoo as an exhibition.

Also included is another bronze, ‘The Mete of the Muse.’ This pair comprising one work, are painted in a black patina and a white auto body paint. The black Egyptian figure represents Africa, the white "Classical" figure represents Europe and the West.

Another series of works are paintings of flags of African and African diaspora nations stripped of color and reduced to their graphic forms in black on the raw canvas.

Wilson has been the recipient of numerous honours and awards and, in 2008, was appointed member of the Board of Trustees of the Whitney Museum of Art, New York, the only artist currently serving as a trustee of a major New York museum. He received an Honorary Doctorate from Northwestern University, Evanston, IL, Skidmore College, Saratoga Springs, NY, Maine College of Art, Portland, and was elected President of the Board of Trustees of the Sculpture Center in New York. He is the recipient of the 10th Larry Aldrich Foundation Award as well as the prestigious MacArthur "Genius Award."

HD images are available by contacting Fabian Lang at contact@mitterrand-sanz.com or by telephone at +41 43 817 68 70.