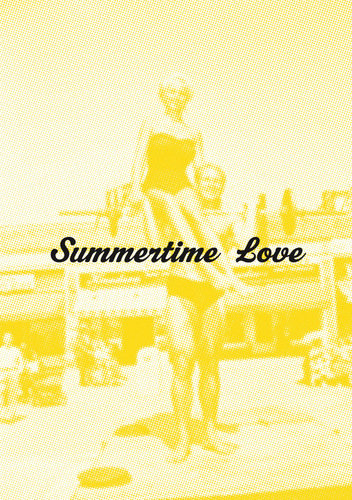 Jean-Pierre Bertrand, born in 1937, lives and works in Paris. Creating both paintings and installations, Jean-Pierre Bertrand never hesitates to use all sorts of materials and textures. Each one of his canvases is, in itself, a screen that stands independently; a framed space within which the effects of the materials remind one of rare organic mixtures. Each painting is a direct expression of the artists emotions, of traces, of stains and of a whole world of qualities both natural and artificial that bring the world of painting to life.

Two neon words make up Acid Juicy, 2006, one placed above the other, one group of letters in white and the other in yellow. For Jean-Pierre Bertrand, "this collection of letters command their surfaces to express a pure pleasure which is only equal to the effect of their own disappearance within the space of the work. They resonate with the phenomenon of the living, within a dual enigma."

Delphine Coindet, born in 1969, lives and works in Lausanne. Delphine Coindet has found a formula for creating a sculpture or painting without the constraints of the workshop. She uses digital drawings and gives her work over to industrial manufacturers. The imagined objects are either borrowed from reality or are derived from more abstract forms without any apparent function. More than just sculpture, it is the installation of an environment that is given to us, as if the virtual world, where her projects are born, materializes into our real space. In Fontaine, 2000, the water congeals in a snapshot of pool-colored blue; the radical minimalism of Delphine Coindet’s work doesn't exclude fiction from the construction of form.

Didier Fiuza Faustino, born in 1968, lives and works in Paris. Co-founder of the "Bureau des Mésarchitectures", his projects take on various forms: from experimental research and the development of public spaces to installations and building houses. Working on a temporary construction in Paris or a basketball court for one single player in Porto, Didier Fiuza Faustino uses architecture with the intention of creating a strong yet, occasionally, disturbing work.
Naked Lunch, 2010 is an ambiguous object due both to its unspecified function and sculptural aesthetic. It invites the body to adopt different postures leading it towards total abandon. Introduced in the space it fuses the distinction between private and public by its functional and contemplative value.
Heaven, 2010 is a microscopic disturbance of a monochromatic surface, an apparition at once fragile and symbolic of the unattainable ideal.

Hans-Peter Feldmann, born in 1941, lives and works in Düsseldorf. Since the beginning of the 1960s Hans-Peter Feldmann has been creating and presenting his scrapbooks made up of found images, such as postcards, newspaper cuttings and posters. These images, which constitute part of his impressive "Image Archive" are classed according to an eminently personal series system. By using the techniques of reproduction or of photography in particular, with the aim of exploring the mystery of everyday life, Feldmann gives a credibility to oft-ignored artistic forms such as photo albums and doesn't underestimate the power of the most common artistic activities.
Three Gracies, is a relief in painted plaster, and one of Feldmann's works inspired by classical sculpture from throughout art history; such as David and Venus. Painted in artificial colours the work suggests something almost cheap, evoking a kitsch quality.

Sylvie Fleury, born in 1961, lives and works in Geneva. Known for her installations and sculptures, Sylvie Fleury plays with codes and intercrosses worlds; the feminine and the masculine, for example, or the worlds of art and fashion in which she explores the idea of prints and multiple editions. Her works generally forse the display of objects which are invested with a strong aesthetic value and a sentimental attachment within society, sometimes sexual or fetishistic. The work of Sylvie Fleury is a perfect illustration of a self-satiated society which satisfies itself with the superficiality that it cultivates.
ALAÏA Shoes, 2003 expresses more love than hate for these objects. The artist plays with the fetichisation of fashion, of shapes and labels, conscious of their hidden meanings and their nuances.

Jean-Charles Hue, born in 1968, lives and works in Paris. His films, based somewhere between erotic heat and latent violence, evoke the troubled atmospheres of traveling communities. Jean Charles Hue was awarded first prize at Mulhouse 001 and at Loop in Barcelona in 2006 whilst his work was displayed at the Fondation Ricard in 2007.
"As the Parabellum Girl entwines Sunny Boy between her legs, he is receiving an order of puchkas (guns). It is a ceremony that unites dance, an idol made of lipstick traces and the ghost of a gun. The forces and the forms unite to create nothing more than a "Parabellum Girl" 2003." Jean Charles Hue

Didier Marcel born in 1961, lives and works in Dijon. Fragments of nature, everyday objects, architectural scale models, Didier Marcel's works trouble the viewers usual points of reference. The landscape, the central work, is taken away in pieces and is brought back in sculptures destined for interior spaces. First laureate of the Prix Paul Ricard (1999), he is today one of the most respected artists of his generation. A solo show at the Musée d'Art Moderne de la ville de Paris has been programmed for October 2010.
Sans Titre, 2005, displays a white tree trunk, with a powdery bark, which rests on a chrome base whilst a fluorescent mark evokes an urban tag and/or the marking of a woodsman.

ORLAN, lives and works in Paris. An historic artist, ORLAN questions social and cultural pressures made on the body and its representations, most notably by the media. ORLAN breaks down walls between cultures, artistic practices, ages, time and space, the real and the unreal. Her photographic work began in 1964-1965. She also works with installations, video, performance, sculpture and new technologies. ORLAN has reconstruct her image and distanced it from conventional standards, with the aim of producing new images which form part of the process of reclaiming the body.
The artworks from the series Skaï and Sky and Vidéo, 1983, take their iconography from western art history. They demonstrate ORLAN's search for the feminine identity and are a critique on religious pressures.

Ida Trusic & Wilfried Mille, born in 1974 in Belgrade and Boulogne-Sur-Mer, live and work in Dijon. Since the beginning of the 2000s, the figurative paintings of Ida Tursic and Wilfried Mille have questioned fantasy and reality, the visible and the representative, yet the subject is always the same: the image and its support. Their large canvases recycle preexisting images, extracts from magazines, of films and other media, mixing glamour, pornography, fashion, luxury and death. The quality of their work led them to win the 11th Prix Fondation d'entreprise Ricard in 2009.
Facial Abstract 4, 2010 shows a female face with eroticism emanating from it by using typical images from pornography, in a sumptuous explosion of the senses and a luxuriant, near baroque, mise en scene.

Franck Scurti, born in 1965, lives and works in Paris. Empty and full, contained and containing, curved and complex spaces: For Franck Scurti, an object questions the limits of its own shape, the essence of its use and the nature of its production methods. According to the artist, Broodthaers, Picabia, Manzoni and also Francis Ponge, taught him to "look at objects better, to try and understand them." Disconcerting due to its apparent absence of a stylistic unity, his work is an undertaking of a mis en situation of the self, between the real and its various representations in relation to aesthetic, historical or economic issues.
In I Love you = UNO, 2000, fabric flowers are painted with the colours and emblems of different countries. Like a shoot emerging from the ground, each flag is divided into a number or burgeoning branches and seems to be absorbed by a natural shape, which denounces their artificial construction. United together in a bouquet, these flowers present a geopolitically, satirical world.

Christian Ward, born in 1977 in Japan, lives and works in London. " Between 1999 and 2002, Christian Ward studied at the prestigious Royal Academy of Arts in London. There, he began his series of paintings, which made his name on the London and international art scene. He depicts vast imaginary and truly psychedelic landscapes, on large horizontal canvases, which he renders from a successive layered construction of grounds openly referring to Sino-Japanese paintings. With Christian Ward, the infinite possibilities of imagination are constrained to a precise painting, a pictorial syntax which the artist has developed throughout the years." *
Untitled (Love), 2009 is a drawing in coloured pencils, based on geometric principles.

Raphaël Zarka, born in 1977 in Montpellier, lives and works in Paris. Raphaël Zarka believes in the chronology of the object, starting with its transformation, playing with its process of diversion, and contaminating its forms and meanings. He duplicates historical, artistic or practical objects as a way of displaying their relationship with the world and of insuring their permanence in case they are ever forgotten.
Ptolémaïques 2, 2009, is a work composed of three cup-and-balls placed on a shelf of cherry wood and copper. It evokes the magnetic Earth of Galileo which we find in the series of photographs taken by Raphaël Zarka in the Museum of History and Physics of the University of Padova, whilst also being a nod towards his father's collection of cup-and-balls.