Prayer Sheet with the Wound and the Nail 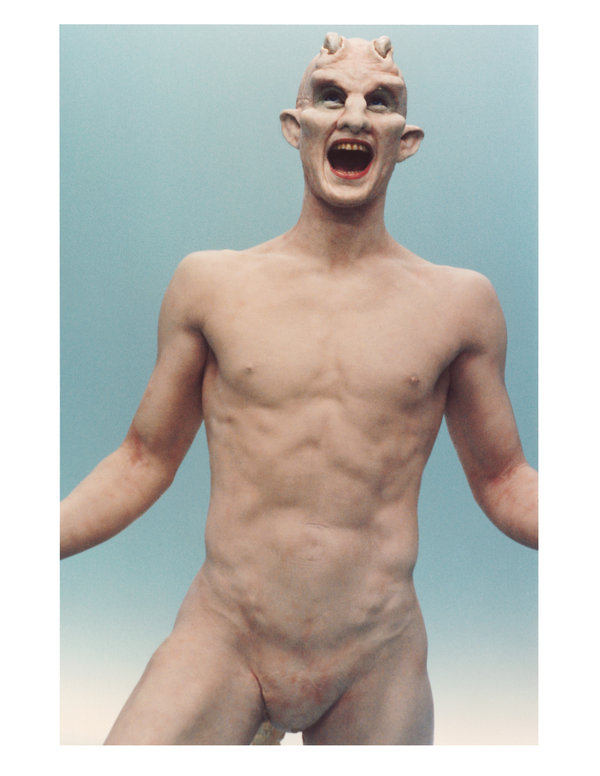 This year Schaulager is presenting Matthew Barney's Drawing Restraint project.
Drawing Restraint is a series of performances, numbering sixteen to date, in which Barney attempts to make graphic marks despite self-imposed physical and psychological hindrances. In the exhibition, works arising from Barney's performances, such as sculptures, vitrines, drawings and videos, will be juxtaposed with artworks from the northern renaissance.

Schaulager's supporting body, the Laurenz Foundation, has acquired Matthew Barney's archive of the performance series together with the Museum of Modern Art, New York. Thanks to this joint acquisition the Drawing Restraint Archive can now be shown to the public in its entirety for the first time.

Born in 1967, Matthew Barney is one of the most versatile artists of his generation, known above all for his ambitious film and performance cycles Cremaster and Drawing Restraint.
The Emanuel Hoffmann Foundation has been buying his works since 1996 and today he is well-represented in their collection, with a large group of works including films, sculptures and drawings. In all their various manifestations, his works are linked by the desire to lend inner states a binding form.

"Form can only take shape when it struggles against resistance" is the underlying principle of Drawing Restraint (literally 'hindered drawing' or 'drawing under difficult circumstances'). This series of artistic actions, which Barney began as early as 1988, were initially designed so that their structures made drawing difficult. The first Drawing Restraint performances consisted of purpose-built apparatus with ramps, slants, elastic belts and other hurdles specifically intended to impair the artist's technical skills. The precisely-choreographed performances revolved around themes such as exertion, overcoming obstacles, rise and fall, and experimenting with the body and its limits. As the series has developed, the performances' settings have become increasingly sophisticated and the narratives more allegorical.

Out of the performances, objects are generated. As "secondary forms" – drawings, sculptures, vitrines or photographs – they emphasise particular aspects of the action and represent the one-off performances in the form of narrative sculptures. Alongside this, every action has been documented on video or film.

The so-called Drawing Restraint Archive includes sculptures, vitrines, videos and drawings.
At Schaulager it is the point of departure for an exhibition with a significantly broader scope including works from the Emanuel Hoffmann Foundation and additional loans. Matthew Barney's works have been placed in dialogue with artworks deploying Christian iconography by Martin Schongauer, Albrecht Dürer, Urs Graf, Hans Baldung, (called Grien) and many other artists. In placing old master works alongside the Drawing Restraint Archive the aim is not to draw parallels between religious and secular visual traditions; the juxtaposition seeks to render latent ideas in Barney's work visible. Notions such as exertion, overcoming obstacles, rise and fall also evolved as traditions within the pictorial invention of Christian iconography.

The exhibition at Schaulager is divided between two floors. On the ground floor the entire Drawing Restraint Archive is displayed, counterpointed by over seventy woodcuts, etchings and drawings from the sixteenth and early seventeenth centuries. On the lower floor three monumental sculptures which form part of Drawing Restraint 9 – Torii, Cetacea and Occidental Restraint – are shown, along with a new work and four old master paintings.

The exhibition is curated by Neville Wakefield, who Schaulager succeeded in engaging as guest curator for this project. A writer and curator, he is intimately acquainted with Barney's work and realised this project in close collaboration with the artist and the team at Schaulager.

Drawing Restraint 17
Drawing Restraint 17 conveys a sophisticated allegorical narrative. Taking as his starting point the powerful painting Death and the Woman by Hans Baldung (called Grien) which is part of the exhibition Barney conceived the idea for a film in which the fundamental elements of the Drawing Restraint series are transposed to the Basel locality. For the first time it is not Barney himself but a young woman who takes on the role of the central protagonist struggling against deliberately-placed hindrances.

Drawing Restraint 17 is the first work that can be seen – on Schaulager's large outdoor LED screens – prior to entering the exhibition. It relates to the new sculpture – its "secondary form" as Barney puts it – on display on the gallery's lower floor: the final shot of the film is a forensic close up of the young woman as she passes through a membrane into a wooden pentagonal frame and thus forms a new sculpture.

Drawing Restraint 18
Drawing Restraint 18 was a performance which created an 'altarpiece' within the basilica- inspired floor plan of the exhibition Prayer Sheet with the Wound and the Nail at Schaulager, Basel, Switzerland in May 2010. The trampoline from Drawing Restraint 6 was used one more time and propped at a twenty-six-degree angle with a pine wedge and placed next to the wall. Vertical marks were made on the altar wall at the height of each leap from the angled trampoline. The length of the mark records the downward fall from the height of each attempt.

The exhibition will be accompanied by various events including film screenings, guided tours and a lecture series.
1st lecture: David Joselit, Yale University: Drawing Restraint 1 -18, in English The full programme will be published in the daily press and at http://www.schaulager.org.

Publication include colour illustrations of all the works exhibited, with essays by the exhibition's curator Neville Wakefield and the old-master curator at the Kunstmuseum Basel, Bodo Brinkmann, as well as an in-depth discussion between Matthew Barney and the British psychoanalyst and writer Adam Phillips.
The publication is published in English and German.
Published by Schaulager Basel. Price CHF 35.00/ Euro 24.00