Six Feet Under Summer Series. Each week of the series six different sets of curators and artists 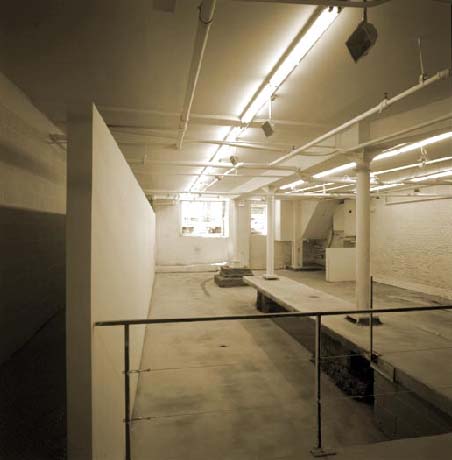 While events such as Rem Koolhaas's Soho Prada store opening and Guggenheim's Armani show appear as the catalyst for the collapse of High Art, Commercialism, and Design, they are merely topical results of a much larger and insidious cultural shift, one greater than any of the single institutes or individuals involved. As Carl Skelton notes, "Guggenheimlichkeit is just as fundamental to the phenomenon of breakfast cereal as it is to any oxymoronic 'contemporary museum." Whether is in the Upper East Side or Chelsea, the seemingly 'neutral' trope of exhibition design, in a mix of "post-industrial guilt" and transparent irony, has been used to 'franchise' museums while making the 'products' within 'peripheral' at best. In her article "Growing Pains" in Art In America critic Eleanor Heartney remarks that "After what seems an unceasing round of blockbuster exhibitions ... one wonders if museums are becoming too much like that quintessential American industry - the movies." *

Opening receptions to be held Thursdays 6-8pm, throughout project schedule:

18 - 24 July.
NEW YORK 2002
By Francois Bucher, curated by Jose Roca.
This piece re-enacts historical revolutionary text and appropriates it into a new space as art. Bucher proposes that the artistic field provides a site of resistance, unfreezing history in the present and sustaining its resonance.

1 - 7 August.
WORKSPHERES
By The Center for Urban Pedagogy (CUP) curated by Yates McKee.
The CUP has created a municipal demonstration project pertaining to MOMA's recent workforce policies and relocation, appropriating materials from the MOMA 'Workspheres' exhibition.

8 - 15 August.
FALSE OPENING
By Pedro Diniz Reis, curated by Hernani Marcelino.
A video installation by this Portuguese artist examines the site specificity of museum spaces and the desire instilled within the viewer to embody that space.

5 - 10 September.
AIRING THE BELLY AT BILBAO
By Dolores Segwaay, curated by Ralph Whitefin.
Images and text loosely portray a drive through the Basque Country with radio broadcast of ETA attack while on approach to Puppy, Gehry, Armani and ill girl besides Yves Klein's fountain.

11 - 18 September.
RADIO-ACTIVE
By Ayreen Anastas and Rene Gabri, curated by Tanya Leighton.
White Box serves as the interface to a radio station, with programming related to or engaged with September 11 and the responses by figures both outside and within the artistic and cultural community.