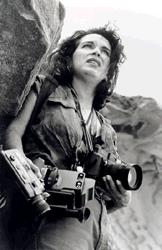 Williams College Museum of Art is pleased to present Tracey Moffatt: Document on view to the public from July 27 through October 6, 2002 in Media Field, a gallery space dedicated exclusively to video and new media.

Comprised of three videos'Heaven' (1997), 'Artist' (1999), and 'Nice Colored Girls' (1987)Tracey Moffatt: Document represents several distinct yet related approaches to video making. While each piece serves as a record of a particular event, concept, or experience, each uses different techniques to express its individual messages, including seemingly unedited surveillance, found footage, and experimental documentary.

Shot with a hand-held camera at Sydney's Manly and Bondi Beaches, 'Heaven' sneaks a peek at good-looking surfers changing out of their wetsuits and swim trunks on the side of the road with only skimpy towels to protect them from Moffatt's prying gaze. With the rough and spontaneous feel of a home movie, the 1997 video provides a lighthearted critique of sexual objectification. Made in collaboration with filmmaker Gary Hillberg, 'Artist' (1999) is a hilarious and fast-paced montage of clichÃ©d representations of artists in popular Hollywood movies and television shows.
Moffatt's earliest experimental film from 1987, 'Nice Colored Girls,' investigates the ongoing social conflicts between Australia's Aborigine women and white men, looking to traditional ethnographic documentaries as an inspiration for her critique. Moffatt's narratives are intentionally nonlinear, leaving questions open and allowing viewers to fill in the blanks with their own knowledge and experiences.

An Australian-born photographer, filmmaker, and videographer, Tracey Moffatt is a leading international artist whose work challenges expectations and defies categorization. Her work has been shown extensively in venues throughout the world, including at the Dia Center for the Arts in New York, the SÃ£o Paolo and Sydney Bienniales, and it can also be seen in the collections of the Museum of Modern Art, NY, the Tate Gallery of London, the Museum of Fine Arts, Boston.

The Williams College Museum of Art is a participating member in The Vienna Project, a collaboration among eleven arts and cultural institutions in the Berkshires. WCMA's contribution to the project, Prelude to a Nightmare: Art, Politics, and Hitler's Early Years in Vienna 1906-1913, runs from July 13 through October 27.

A portion of the museum's general operating funds for this fiscal year has been provided through grants from the Institute of Museum and Library Services, a federal agency that fosters innovation, leadership, and a lifetime of learning, and from the Massachusetts Cultural Council, a state agency. The Williams College Museum of Art is open Tuesday through Saturday from 10 a.m. to 5 p.m., and Sunday from 1 to 5 p.m. Admission is free and the museum is wheelchair accessible.