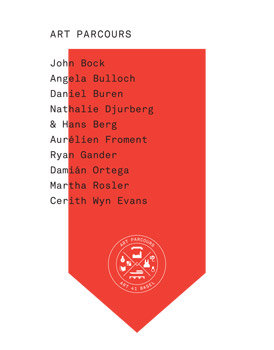 With its new Art Parcours special exhibition project at Art 41 BaseI, the show positions contemporary art within the city of Basel in an unprecedented way, temporarily occupying iconic venues throughout the city’s historic center.

This array of high-caliber pieces, selected by Jens Hoffmann, Director of the CCA Wattis Institute, San Francisco, will engage both with today's Basel and with its long history, weaving artistic interventions into the fabric of the city.

The venues are located in the historic center of Basel and include the Münster cathedral, the City Hall, the Natural History Museum, the old University, and a ferry boat traversing the Rhine, as well as various public spaces throughout the area.

John Bock
"Der Seewolf," 2010, Münster Ferry Boat
John Bock will stage a new performance on the historic boats that have been ferrying passengers across the Rhine River since 1854. For his performance, which is based on the 1904 novel "The Sea-Wolf" by Jack London, Bock will adopt the persona of a ferryman. Bock's performance weaves together social, political and artistic commentaries that navigate into the unexpected.

Daniel Buren
'"Colors on the Rhine" work in situ 2010. Basel CH', Old University
Daniel Buren's installation is sited at the Alte Universität of Basel, the oldest university in Switzerland, located in the historic heart of Basel. Buren's installation will transform the windows of the university's facade with a checkered grid of colored transparencies, which after dark will be lit from within, projecting light rays into the night.

Nathalie Djurberg and Hans Berg
"Of Course I'm Working with Magic," 2010, Natural History Museum, Storage Cellar
Nathalie Djurberg will present a claymation video in the storage cellars of the Natural History Museum of Basel, accompanied by a live soundtrack created by Hans Berg. Amidst the stuffed animals, protruding horns and natural oddities stored in this basement, Djurberg will also screen a selection of her hand-modeled animations featuring animal characters.

Aurélien Froment
"The Fourdrinier Machine Interlude," 2010, Mentelin Hof, E. E. Zunft zu Weinleuten
Aurélien Froment will premiere a new documentary film, specially commissioned on occasion of Art Parcours. The film revolves around the invention and production of paper in Basel, and will be narrated in German, English and French dubbed over each other, creating an unintelligible cacophony of words.

Damián Ortega
"New Balance," 2010, City Hall, Court Yard
Damián Ortega will create an installation in the interior courtyard of the Town Hall, the seat of the city government, dating back to the 14th century. Within this political and judicial nexus, Ortega will install a monumental sculpture of the Goddess of Justice flanked by a three-armed scale, upon which the public can step in an attempt to reach equilibrium.

Martha Rosler
"Fair Trade Garage Sale," 2010, Museum of Cultural History
Martha Rosler recreates her seminal performance and installation work "Garage Sale," adapted specifically for Art Parcours and presented at the Museum der Kulturen. "Fair Trade Garage Sale" takes its inspiration from the American "garage sale," where one person's junk is another person's treasure. Everything is for sale, and prices can be negotiated with the artist, who will be present. All proceeds of the sale will be donated to a local charity.

Cerith Wyn Evans
"Paysage fautif (Wayward Landscape)," 2010, On the Rhine at the Mittlere Rheinbrücke
Cerith Wyn Evans will create a firework display on a floating platform in the Rhine, adjacent to the oldest bridge in Basel, the Mittlere Rheinbrücke. Wyn Evans' firework pieces are wooden structures that spell out enflamed quotes burning over a specified period of time. The piece presented in Basel will be new and site-specific.

Art Parcours Vernissage, held on Thursday June 17, will be by invitation only.