Videoparcours through Basel city centre. The works of 15 artists forms a parcours comprising 11 stations, extending from the SBB train station, then reaching into the international fair trade. 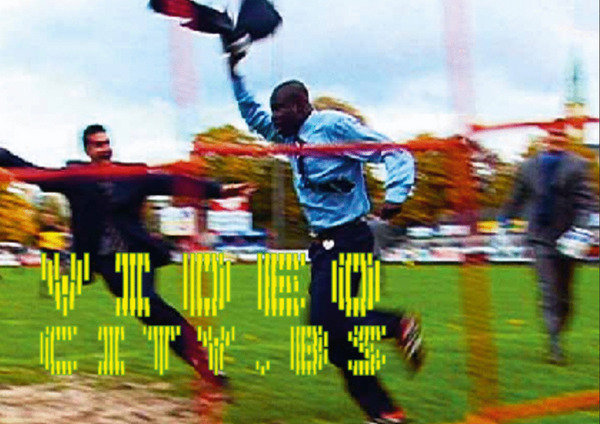 After the successful pilotphase in 2013 with video artists from Basel, this year video artists from throughout Switzerland will be presenting their works in shop display windows, lobbies and the entrance halls of local bu siness and cultural institutions in Basel city centre. Experts from diverse regions in Switzerland – Carola Ertle + Günter Ketterer, Daniel Hauser, Jérôme Leuba and Boris Mag rini – proposed their own favourites, which were subsequently chosen for specific sites through the process of a lively dialogue between Andrea Domesle and Laura Schuppli and the hosting business es in question.

Due to this dialogical selection process ‹videocity.bs› can claim to have its finger on the pulse of time, in that it takes up actual questions currently on the minds of Basel citizens and comments them in videos.
For instance in June the Football World Cup will be on all the airwaves. In Ingeborg Lüschers world famous video entitled 'Fusion' (2001 ) players from Grashoppers Zurich and FC St. Gallen play against each other, b ut kitted out with Italien business attire made to measure, including business shirts, ties and football shoes – in a new parable about the behavioural parallels between mod ern managers and footballers.
In 'BABEL I' (2012) Peter Aerschmann presents us wi th a building site and some tower blocks as they appear in our media coined world.
Furthermore gold coins will be buried at a bank (Ju dith Albert: Fairytale, 2008), and throughout Basel two young men will be f orging new pathways (Daniel Künzler, Roman Menge: Familiar spaces, unfamiliar p athways, 2014). Furthermore there shall be unusual gestures such as a certain a erobatic pilot in the shop window display of the Pfauen - your department store in Ba sel; or views of people inflated to giant proportions on the billboard screens of the C ongress Centre in the trade fair grounds – these are meant to enrich our daily live s, or to inspire us using humorous or thought-provoking questions as we tread our path ways through Basel.

The videos have been chosen so as to set up references with their respective locations: Their contents are a comment on the spec ific location and visual links are also set up with the surroundings. Thanks to the ar t, a new view of what is supposedly familiar is opened up; the everyday goin gs on create a non-habitual plane of friction with the works themselves, strengthenin g their expression or even allowing new ways to approach them. Basels everyday life will be mirrored, as the saying goes, in the video monitors. It becomes inte rwoven with the imaginative worlds of the artists, intervening in the reception of the works of art, allowing contemporary interpretations.

15 Artists or else artist duos – amongst them are also the internationally famous such as Pipilotti Rist or Beat Streuli – have entru sted us with their works. The youngest and a new discovery of our own is Roman Me nge, who was born in 1993 in Basel, and the oldest is a grand dame of the Swiss art scene: Ingeborg Lüscher namely, who lives in Tessin.

‹videocity.bs› forms a parcours comprising 11 stations, extending from the SBB train station, then through the city centre reaching intothe international fair trade grounds. Some of the locations from last year are i ncluded, as well as new ones. We have two final destinations where several videos ca n be seen: the billboard screen at the Congress Centre, Messeplatz Square, and the liv ing room cinema of ingenodata, Güterstrasse. Situated between these points ‹video city.bs› unfolds for the space of a month into an immaterial 'city' in the heart of Bas el, perhaps even turning into the 'greatest open air museum of the world' again as in Lukas Hausendorfs contribution to ‹videocity.bs› in 20min., on 30.05.13.

‹videocity.bs› is aimed at a wide audience, towards everyone who lives and works in Basel, towards all the tourists, and the experts as well as the philistines and it costs nothing and lasts from 9 in the morning till 12 midnight, and it can be viewed as you stroll through the streets. The videos are pioneeri ng in their imaginative worlds and possibilities, which had not previously been concei vable, and they stimulate us with unexpected meetings and new inspiration. Ones own h ome city can be seen with different eyes and can prompt the stranger to makin g more deeper investigations – whether as a hurried passer-by, who may only moment - and fragmentarily react to something, or decide to linger and settle in a cert ain spot.

Visible on the streets between the hours of 9 a.m. till midnight daily