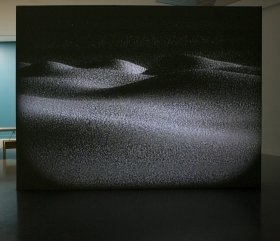 Auguste Orts is the production platform set up by the artists Herman Asselberghs, Sven Augustijnen, Manon de Boer and Anouk De Clercq. On the basis of their differing experiences, they conceive and produce art projects in various genres and formats. The first collective exhibition by Auguste Orts came about on the basis of the frequent letters the four members exchanged about their work and contains two installations by each artist.

In 2006, four Brussels-based artists, active primarily in the expanded fields of film and video, decided to join forces to found the Auguste Orts production platform, named after the obscure historical figure whose memory lives on in the street which houses the foursome’s headquarters until this day.

Initially intended to answer shared questions concerning issues of production and distribution, the ambitions of Auguste Orts quickly transcended merely practical considerations; there were deeper reasons, after all, why these particular artists chose to exchange experiences and ideas, and these deeper reasons clearly relate to shared intuition, sensibilities and sensitivities vis-à-vis the film medium and the broader context of audiovisual production. With the current project, Herman Asselberghs (°1962), Sven Augustijnen (°1970), Manon de Boer (°1966) and Anouk De Clercq (°1971) are invited, for the first time, to fully articulate these intuitions and sensibilities as a program of sorts. The exhibition organized by M HKA will attempt to highlight the unique features and the commonalities of its four members in equal measure.

Two broadly defined ‘storylines’ structure the exhibition, which was developed and designed in close collaboration with the artists: one concerns the more formal aspects of the ‘apparatus’ (camera movement, diegesis, editing, screening, the dichotomy of sound versus image, as well as the psychology of identification and projection, etc.); another is a set of themes and topics on the level of ‘content’ that seem to recur through much of the work. A central topic certainly concerns the problematic, highly unstable status of language – the films often depict or evoke silence, feature deafening noise or endless streams of chatter, portray the breakdown of speech and other forms of communication, or otherwise challenge the truth claims of discourse.

Such healthy distrust of language notwithstanding, however, dialogue is still at the heart of this project, as it must be in all collaborative efforts such as Auguste Orts – hence also the title Correspondence, alluding to the many letters written by the artists to each other discussing their practice (among many other things such as motifs and motivations), as well as to the actual correspondences between these practices as such. A string of these letters meanders through the exhibition, thus providing it with a skeletal structure that is rich in meaning.

Each artist is represented by two works, among them also new productions. An accompanying publication, made in collaboration with Sternberg Press, features some of the aforementioned letters, an essay by TJ Demos, an introduction by Bart De Baere, and a round table discussion moderated by the curator of this exhibition Dieter Roelstraete.