The archival project On Kawara: Pure Consciousness at 19 Kindergartens constitutes a kind of genealogical reprise, a third act in the drama of withdrawal that the kindergarten exhibitions themselves represent vis-a-vis the Today series as it existed and, a fortiori, was exhibited before 1998. Perjovschi's medium is site-specific drawing, albeit often ramified as installation and performance. His 'canvas' like that of the graffiti artist, is the nearest wall, preferably topographically marginalized or, in his own word, 'leftover'. And his utensils are nothing more than those easily accessible in a grade-school classroom: chalk, marker, pencil, or pen. 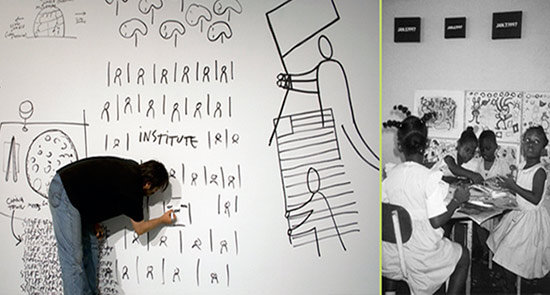 On Kawara
Pure Consciousness at 19 Kindergartens

Beginning in 1998, New York City-based Japanese artist On Kawara subtly minimalized his longstanding already-minimalist Today series, the date-painting project he began in 1966. Still ritualistically maintaining the self-imposed constraints of the project (principally, that the date on which the painting was begun be its alphanumeric subject and that it be completed before the end of that day and, if not, destroyed), Kawara opted to modulate the reception of a week's worth of these works (January 1 to January 7, 1997) by stationing them, under the title Pure Consciousness, in nineteen kindergartens across the globe.

Inasmuch as it presents an account of such modulated acts of reception, the archival project On Kawara: Pure Consciousness at 19 Kindergartens constitutes a kind of genealogical reprise, a third act in the drama of withdrawal that the kindergarten exhibitions themselves represent vis-à-vis the Today series as it existed—and, a fortiori, was exhibited—before 1998.

If the Today series (as exhibited prior to 1998) was marked by Kawara's (and, thus, the beholder's) compulsive concentration on the time of his life, then the act of withdrawal—the minimalizing of already-minimalist paintings—that Kawara's Pure Consciousness intervention entailed was, in effect, a progressive undermining of the by-now-banal artworld face-off, here and now, between work and beholder. Indeed, the title Pure Consciousness itself bespoke a situation in which it was child-developmentally—if not exactly metaphysically—impossible for the work on display to be, properly aesthetically speaking, beheld. The "gardens of children" that made up the nineteen spaces in which the same seven paintings again and again came to loom were gardens whose instances of growth, whose creaturely inhabitants, were beings rather more like the ones being beheld, as it were by the thus newly animated paintings, the dates on whose surfaces, in each case, occurred within the as-yet-brief—the untimely—careers of the children themselves, seven days in the lives of each of them.

The purity of the consciousness in question thus could be seen as the children's perfectly beautiful indifference to the spectacle of exhibitionism before which, be they never so fully alive and absorbed in the round of their activities, they could not even begin to know how to react, how to become present. It is this radical failure in the know-how of response, this "blindness" before the panopticality of artworks raised on high, this easeful neutrality, that the archival project On Kawara: Pure Consciousness at 19 Kindergartens aims to invite its own "beholders" to consider and, perhaps, to emulate—no doubt with the same unwitting theatricality and slight desperation that the sophisticated adult always betrays when attempting to rediscover within herself what Friedrich Nietzsche called, in Beyond Good and Evil, the seriousness that one had as a child at play (den Ernst . . . , den man als Kind hatte, beim Spiel).

On the face of it, it would be hard to find an artist whose practice is simpler than that of Romania-born and -based Dan Perjovschi. His medium is site-specific drawing, albeit often ramified as installation and performance. His "canvas," like that of the graffiti artist (from whose "baroque" and territory-marking methods he nevertheless firmly distinguishes his own), is the nearest wall, preferably topographically marginalized or, in his own word, "leftover." And his utensils are nothing more than those easily accessible in a grade-school classroom: chalk, marker, pencil, or pen.

But if prima facie simplicity is a virtue, it's a virtue, in the case of Perjovschi, made of a fairly dire necessity. Though deposed and executed Romanian autocrat Nicolae Ceauşescu's notorious austerity programs might be retroactively interpreted as one of the principal catalysts behind the Romanian revolution of 1989, living that program before the fact—whether as artist, as Perjovschi did, or as ordinary citizen—could hardly be described as prospective of impending emancipation. With shortages and rationing of most vital essentials throughout Romania during the 80s, not only were artist's supplies obviously—and comparatively unimportantly—difficult to come by, but so was the very lifeworld, the shared communal background, within (or against) which the artist devises his concepts and objects. In fact, Perjovschi has freely acknowledged that, contrary to Romantic notions about the artistic inspiration to be won through hardship and deprivation, inescapable-seeming misery is not artistically enabling or "sexy" at all. Nevertheless, the artistic voice he developed as his native land began to turn away from Ceauşescu-style communism toward its 2007 inclusion in the EU is a voice that retains the traces of its passage—the madness of political austerity and censorship having been transmuted into a method of simplicity and candor, at once humorous and pungently critical.

Above all, it's Perjovschi's candor, his commitment to what he calls "leav[ing] the idea intact," that has carried over to his current practice: drawing (and writing) against the grain of one-dimensional transnational media conglomerates whose Big Brother–like "right" to stay—and to keep their target audience—on message seems all but indefeasible. All but. And it's within the interstices and ambiguities of what otherwise would amount to a discursive hegemony that Perjovschi plies his trade—reappropriating, dismantling, inserting, x-ing out, ironizing, subverting. Definitely striving to turn things on their heads, he nevertheless eschews the all-knowing, all-negating perspective born of distance and critical superiority. With a lightness of gesture, his aim is to activate and to celebrate the space he has been given to work on and with, as well as to avoid the surface cheer but deep cynicism of the cultural, social, political, and economic prerogatives he counters.

Though airy and ephemeral, the marks Perjovschi makes are not intended as yet another chapter in the postmodern panegyric on impermanence-as-metaphysical-absolute. Rather, the fleetingness he embraces in his drawing—a medium he renders transdisciplinary and multidimensional—is an empathetic opening of the self both to others and to the otherness of real opportunities to revise, renew, and repeat. Such openness to nonassertiveness, relinquishment, and self-transformation complements Perjovschi's unpessimistic belief, this late in the day, in the possibility of art's genuinely mattering—a belief, wrought by hard experience rather than naiveté, in something not altogether unlike the artist as unacknowledged legislator of the world.

SFAI's Exhibitions and Public Programs are supported in part by the Grants for the Arts/San Francisco Hotel Tax Fund. Additional funding for Dan Perjovschi: The Institute Drawing has been provided by the Romanian Cultural Institute in New York City. On Kawara: Pure Consciousness at 19 Kindergartens and Dan Perjovschi: The Institute Drawing are presented as part of Global Figures, a component of SFAI's Exhibitions and Public Programs. Devised by SFAI's Director of Exhibitions and Public Programs Hou Hanru, Global Figures presents one-person projects of major artists from different cultures who have importantly influenced the current global art scene. Dan Perjovschi will be in residence at SFAI for a two-week period preceding the opening of his exhibition, during which time he will create the drawings that will comprise it.

San Francisco Art Institute
Founded in 1871, SFAI is one of the oldest and most prestigious schools of higher education in contemporary art in the US. Focusing on the interdependence of thinking, making, and learning, SFAI's academic and public programs are dedicated to excellence and diversity.

SFAI's School of Studio Practice concentrates on developing the artist's vision through studio experiments and is based on the belief that artists are an essential part of society. It offers a BFA, an MFA, and a Post-Baccalaureate certificate in Design and Technology, Film, New Genres, Painting, Photography, Printmaking, and Sculpture/Ceramics.

SFAI's School of Interdisciplinary Studies is motivated by the premise that critical thinking and writing, informed by an in-depth understanding of theory and practice, are essential for engaging contemporary global society. It offers degree programs in Exhibition and Museum Studies (MA only), History and Theory of Contemporary Art (BA and MA), and Urban Studies (BA and MA).

SFAI's Dual Degree MA/MFA program is ideally designed for students who seek a deep and balanced immersion in both theoretical discourse and art practice. A three-year commitment, the degree consists in an MA in History and Theory of Contemporary Art and an MFA in any area of study within the School of Studio Practice (see above).

For more information about this exhibition or other public programs at SFAI, please go to http://www.sfai.edu or call 415 749 4563.