The retrospective exhibition that presents the work of an artist bringing everyday objects and phenomena into contact with one another in an ironic, reflective or enigmatic approach expressing tactful and humorous social criticism. The show draws an imaginary arc tracing his 25-year-long journey in a varied oeuvre and uses juxtaposition in its interpretation of the material. Thus it seeks to establish a dialogue both with Gerber's oeuvre and between the individual works as well. 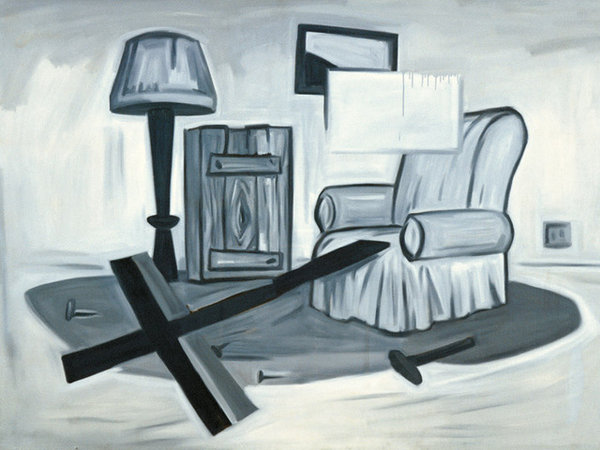 One of Ludwig Museum's individual oeuvres, the retrospective exhibition of Pál Gerber presents twenty-five years' work of an artist bringing everyday objects and phenomena into contact with one another in an ironic, reflective or enigmatic approach expressing tactful and humorous social criticism.

Pál Gerber's career began in the late eighties, during the last period of the so called goulash communism. His childhood years in Tatabánya and the industrial milieu of the city left a strong mark on Gerber, who later moved to Budapest. His works bring back the well-known, smiled upon or rather repulsive slogans, object culture, colour schemes, ever familiar greyness, thought associations and object ensembles of the Kádár era. As a young painter, the new economic and political climate of the nineties elicited a shift in his art, which did, however, retain its fundamental feature - that is, above all, a continuous dialogue with the surrounding world and with the visible and invisible layers of mass culture. With his precisely articulated motifs - be it a highlighted excerpt, a stumbled-upon classified ad or a visual element - he creates unexpected associations and enigmatic references to history and culture.

Pál Gerber's retrospective exhibition is the next event of the Ludwig Museum series introducing artists' oeuvres. Deriving from the material of the legendary Kék Acél (Blue Steel) exhibition held in the year of the regime-change (1989), Ludwig Museum's show draws an imaginary arc tracing Gerber's 25-year-long journey as an artist. This is a varied oeuvre in terms of genres as well. Instead of addressing this diversity through the obvious chronological approach, however, the exhibition uses juxtaposition in its interpretation of the material. Thus it seeks to establish a dialogue both with Gerber's oeuvre and between the individual works as well. Although the audience may have seen Gerber's work at a number of exhibitions through the years, such a multifaceted dialogue has not been realised before.

In addition to such new works as the According to Law series (2010), The Truth Sets You Free (2010), and Dust on Modernism (2010), Pál Gerber's earlier installations will also be featured, including Hope in Skilled Labour (1994), and, exhibited for the first time in Hungary, I Don't Like Pessimism (1992). His works commenting on the world, the actors, the trends and the operating mechanisms of art (The Weight of Art – Uplifting Art, 2010; Price Pictures, 2008; Creative Artist Hard at Work at Developing His Own Unique Style of Form, 1991/2010), and his more explicitly political and socially critical pieces (Ochre Flag, 2005; Oil Stain, We Are a Small Country, 1992; Living without Self-Critique, 2006/2010) will also be presented. Gerber usually highlights the banal, unarticulated, lurking repressions and bittersweet truths of the everyday world that surrounds us (Woman's Handbag with a Broken String of Beads, 2003; Gabi's Short Story, 2005/2010; Object Caught on the Chandelier, 1998).

LudwigInzert's first public event, the solo exhibition of Matthias Megyeri entitled Budapest Hangings reflects on the inspiring situation of both the new gallery and the Ludwig Museum. The artist turns the gallery space inside out, reinterpreting the relationship between private and public space, downtown and suburb, centre and periphery. He covers the inside walls with the bleak blue backsides of giant posters as a restrained gesture of intervention into the Józsefváros locale, which has been a community centre for years. As an offset, he covers the front with a colourful mosaic from a selection of his private photo collection comprising thousands of items. Passers-by can freely pick from the snapshots showing scenes from their own city as well as from other places, through the eyes of an artist with Hungarian origins, living and working in Stuttgart, Germany and London, UK.

Megyeri prefers taking snapshots everywhere he rambles, mostly pressing the shutter in motion, while racing his scooter. He likes the authenticity of this broadly understood medium, and he considers photography the best way to express personal values and memories. His photos are also to be displayed outside Józsefváros. Hence they will cover the corridors of Ludwig Museum, symbolically connecting the monstrous museum remote from the city centre with the gallery in the midst of the bustling life of the capital. These photographs are therefore more than just imprints of personal memories. By exposing them in public space, the project attempts to reinterpret the relationship of strongly controlled public space, centre and periphery.

The Ludwig Museum's 2010 exhibition of the permanent collection displays works which focus on the complex, conflictual and often ambiguous relationship between aesthetics and politics. Within this vast theme are such concrete topics as the destiny of social and artistic utopias, the functioning of cultural memory, the borders of creativity, the various usages of urban public space, the role of the artist and his/her relationship to politics, etc.

These questions often appear in the face of power structures, which – particularly in our geo-political sphere, but not exclusively – receive an explicit political undertone. One of the most conspicuous examples is the extensive censorship exercised by the political power of the previous regime, which directly defined the existential existence of the artworks of the era, and indirectly influences the ways in which we perceive this period and show the works that were created then.

These movements, however, were not independent from the international art scene either, because the works were born out of a dialogue, or in opposition to, the international art world. One of the most obvious and well-known examples was during the Cold War era, when abstract art was used as a means of propaganda in the West, and the same happened to Socialist Realism in Hungary, compelling artists interested in producing abstract works to take a dissident position.

In the current exhibition, this thematic approach is the strongest principle defining the selection of works from the Museum's collection. Instead of displaying the well-known highlights, the exhibition intends to focus on newer works, and endeavours to acquaint the wider public with them. Among them are recent acquisitions on display for the first time in the context of the Museum, in part from Hungarian artists (including István Csákány, Tamás Kaszás, Ádám Kokesch, Csaba Nemes). Some of the works are well-known pieces from the international scene (e.g., the works of Harun Farocki, Zbigniew Libera, Simon Starling, Mladen Stilinović, Bálint Szombathy, Goran Trbuljak).