Neto constructs forms from poliamid, stretching this material to echo the architecture of the exhibition space. These skin-like membranes are engorged with substances like powdered turmeric or lead shot. The 258 photographs that form Dalam, (Malay for deep; inside; interior), are the outcome of Gill's travel across the Malaysian Peninsula over an 8 week period. 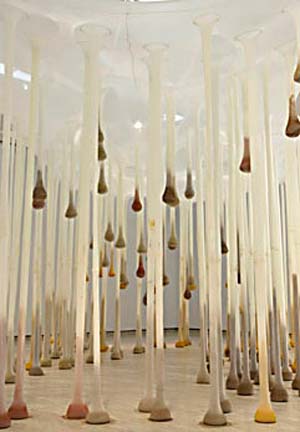 A new sculptural installation by the Brazilian artist Ernesto Neto. Neto constructs forms from poliamid, stretching this material to echo the architecture of the exhibition space. These skin-like membranes are engorged with substances like powdered turmeric or lead shot.

An exhibition of the work of Brazilian artist, Ernesto Neto, presents a sensual experience. Engorged fabric sculptures stretch across exhibition spaces resembling both architectural forms and bodily membranes. Neto uses materials that engage all the senses; smell and touch are as important as sight.

Neto often uses a stretch material, like lycra, that is held taut and weighted with aromatic spices such as turmeric and clove or other materials including graphite or lead shot. He attaches stocking-shaped forms to the ceiling and throws them to the ground, creating a corona of colourful powder on the floor. The colour of the substances against the milky-whiteness of the fabric and gallery space is visually engaging and the rich and spicy smell announces the work before it is seen.

He also creates semi-transparent rooms, soft cubes that recall skin-like membranes. The viewer enters these rooms and quite literally has to engage with the work, pushing and pulling and altering its semi-transparent shape through walking through the space. The fabric feels like a soft and giving skin and Neto enhances this association by embroidering orifices into the membrane. These works are the opposite of the â€˜donâ€™t touchâ€™ dictum that usually rules in art galleries, as they desire a physical relationship with their audience.

Neto considers that this can be. a place of sensations, a place of exchange and continuity between people, a skin of existence and relationships.

In July Ernesto Neto will undertake a residency at the School of Fine Arts at the University of Newcastle. During this time he will make a new room installation for the Contemporary Projects Space at the Art Gallery of New South Wales that will be on display from 26 July to 8 September 2002.

Ernesto Neto lives and works in Rio de Janeiro, Brazil. He is amongst a group of younger Brazilian artists who have come to international prominence over the last decade. He has had numerous exhibitions including solo shows at the Kunsthalle Basel, the Kiasmia Museum of Contemporary Art, Helsinki, and the ICA in London. He was also included in the 2001 Venice Biennale, in Space-Jack at the Yokohama Art Museum, in Trace, the inaugural Liverpool Biennial 1999 and in the 1998 Sao Paulo Biennial and in Loose Threads at the Serpentine Gallery, London. Netoâ€™s work was last seen at the Art Gallery of New South Wales in the 1997 Guinness exhibition, Material/Immaterial.

The 258 photographs that form Dalam, (Malay for deep; inside; interior), are the outcome of Simryn Gillâ€™s travel across the Malaysian Peninsula over an 8 week period. Gill knocked on the doors of strangers and asked if she could enter their houses to photograph their living rooms. Perhaps surprisingly, most said yes, and the resulting works are a fascinating index of how people live as well as conveying why the artist undertook this project.

The artist made this work in response to a question she asked herself; "In conceiving the work I had wondered what the 'inside' of a place might look like. Do lots of people held together by geography add up to the idea of a nation or single unified group? The place that I chose to look at is one that is inside me, but also one that I have been removed from for a very long time. In this respect, embedded in this work was a demand that I made on myself to confront the conflicting experience of being both insider and outsider, by requiring myself to persuade people, strangers, locals, to trust me and to let me into their homes."

This major new body of photographs is part of an exhibition that features a selection of Simryn Gill's work from the last decade. Through photographs, objects and installations Gill consider how we experience a sense of place and how both personal and cultural histories inform our present moment. Her work also suggests how culture becomes naturalised, an almost invisible part of our physical environment.

Gill also works with the books, narratives and texts that provide a framework through which we order and describe the world around us. In Pooja/Loot (1992), Gill carved and sliced into old books to create shrines and niches. Found discarded objects were placed in the shrines, creating household gods from inconsequential things. This also creates a leakage of meaning between these everyday items and the words and language which literally forms a contextual halo around them.

In Forest (1996-98), lush tropical foliage is invaded by torn book pages mimicking natural forms to become banana flowers, aerial roots on fig trees, mangroves emerging from mudflats, variegations on leaves and decaying vegetation at the base of epiphytic ferns. Gill's photographs record this strange hybrid nature before the paper rots away, suggestive of how nature is culturally inscribed and the futility of this attempt at containment.

In Washed Up, 1995, water worn glass engraved with words is strewn across the gallery floor. This glass has been collected on beaches on the west coast of Malaysia and the southern islands of Singapore. Each water and sand smoothened piece of glass has an English word etched on it. Gill has said about this work:
"I remembered as a child standing on those beaches wondering what was on the other side [in making this work] I was interested in the way when language leaves one place and washes up at another, something happens to it and ... the meanings of the words change".

Simryn Gill lived in Malaysia, Singapore, India and Britain before arriving in Australia. She has exhibited extensively in Australia, Asia and internationally, including participating in the Sydney Biennale 2002, Berlin Biennale 2001, in Flight Patterns at Los Angeles Museum of Contemporary Art 2000, Asia Pacific Triennial 1999, Cities on the Move at various venues in Europe and Asia, and Transculture at the 1995 Venice Biennale. She was also included in the curated book project Fresh Cream. In addition to this she has had numerous solo projects including a survey show which toured the UK, exhibitions in Australia, Singapore, Malaysia, at Artpace in Texas and the Kiasma Museum in Helsinki.

Accompanying the exhibition will be an illustrated catalogue with essays by Sharmini Pereira, a London-based curator and writer, Heidi Zuckerman Jacobson, Curator at the UCLA Berkeley Matrix Gallery, and exhibition curator Wayne Tunnicliffe.