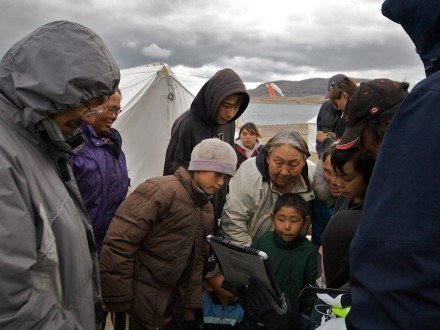 HKMV presents Arctic Perspective, a large-scale exhibition surveying the results of an international media arts partnership. Arctic Perspective provides compelling insight into the Arctic as a living environment and a critical marker of global change. The exhibition will be on display from 18 June to 10 October 2010 at PHOENIX Halle Dortmund.

The programme of exhibitions and events of the Dortmund-based Hartware MedienKunstVerein (HKMV) focuses on artistic practices and discourses at the intersection of media and technology in contemporary society. Arctic Perspective Initiative (API), a research, design, architecture, and exhibition project supported by the European Commission, investigates the global cultural and ecological importance of the circumpolar regions and their potential as sites of autonomy, networking and the intermeshing of traditional, scientific and artistic knowledge.

Arctic Perspective Initiative (API), led by artists Marko Peljhan and Matthew Biederman, is a joint project of institutions from five countries: HKMV (Dortmund, Germany), Projekt Atol (Ljubljana, Slovenia), The Arts Catalyst (London, UK), C-TASC (Montreal, Canada) and Lorna (Reykjavik, Iceland). It aims to raise public awareness of the radical ecological and cultural transformations the Arctic is currently undergoing as a result of increasing geopolitical conflict over land ownership and natural resources. At the same time, the circumpolar region is a potential space of transnational and intercultural cooperation, and the exhibition focuses on providing an overview of these kinds of perspectives through thematic foci of architecture, geopolitics, autonomy, and technology.

Since 2006, artists Marko Peljhan (SI) and Matthew Biederman (US/CA) and their collaborators have been working with community members in the North in order to realize open, shared information and data gathering networks and sustainable mobile structures. Contrary to the popular views and stereotypes, there is a wide variety of Northern driven positive initiatives that range from establishing political and territorial boundaries and self determination, while reflecting longstanding cultural values. Their work follows the fact that circumpolar territories continue to be the subjects of fierce international competition for still unexploited natural resources especially in light of the combination of the increasing global demand and depletion with climate warming allowing for easier extraction. While the native inhabitants of the Arctic are wellversed in the use of modern technologies – for transportation, hunting, communication, art and media – since the 1940s, their culture has been increasingly affected by recent global developments, such as the militarization of the North, the impact of new technologies, the worldwide economy, and of course climate changes.

In 2009 Arctic Perspective Initiative tendered a bid for the design of a mobile living and work station to be used for nomadic and media-based work ‘on the land’, i.e. outside the permanent Arctic settlements which were established in the post second world war era by the Canadian, Russian, Danish and other governments with direct Arctic impact as acts to establish sovereignty of the Arctic. The competition prompted an astonishing 103 contributions from over 30 countries, three of which were prized by an international jury.

The mobile API Arctic habitat, which will be shown as part of the exhibition in Dortmund, is a low carbon footprint research station based on designs by API contributors Nejc Trošt, Marko Peljhan and Matthew Biederman, the winning proposals, and Northern community members. It is conceived to allow members of the local Arctic communities to re-establish their own autonomy by allowing for extended living ‘on the land’, while simultaneously collecting scientific data and communicating globally by means of the onboard technology that is powered entirely by renewable resources. Merging culture, tradition, science, art, education, and technology, the project also aims to create a permanent and free communication and data exchange network that provides access to open source technologies (both hardware and software) as well as education and training workshops. It thus intends to support circumpolar communities by contributing to the preservation and development of their culture, with media art acting simultaneously as a mediator between the realms of science and culture and a driving force behind social change.

The exhibition and project will be accompanied by a four-volume cahier set published by Hatje Cantz.

Arctic Perspective is supported by the European Commission, the Cultural Office of the City of Dortmund, the Ministry of Culture of the Republic of Slovenia, the City of Ljubljana, the University of California Institute for Research in the Arts (UCIRA) Integrative Methodologies initiative and the Arts Council England.
A condensed version of the exhibition will be on display at Canada House on Trafalgar Square, London, until 30 September 2010. As part of the exhibition at PHOENIX Halle Dortmund, a series of working meetings and panel discussions will take place from 24 to 26 September 2010. The open space conference, which is supported by the German Federal Centre for Political Education, will gather international lecturers from the realms of science and research as well as Northern leaders, artists, and several project participants, to help determine the future directions and implementation of API. The exhibition Arctic Perspective is on display at Dortmund’s PHOENIX Halle until 10 October 2010.

Concurrently to Arctic Perspective, HKMV is showing the media arts exhibitions Agents & Provocateurs (until July 18) and Building Memory (until August 15) in its new premises on the second and third floor of the Dortmunder U – Centre for Art and Creativity.

For detailed information on all the exhibitions and events, please visit the HKMV website at the API website at http://arcticperspective.org