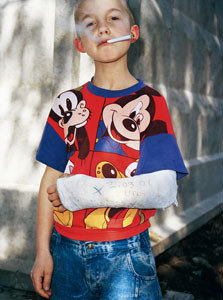 Araki was born in 1940 in Tokyo, where he still lives and works. Ever since the first meeting with his future wife Yoko Aoki in 1967 she became his favorite model and the motif for his photographic research. The documentation of their honeymoon became one of Araki’s most important photo series, appearing as a publication entitled »Sentimental Journey«. Following his wife’s death in January 1990 the horrifying experience of death flowed more strongly into his works, expressing itself in scenes and motifs, which beneath the surface address the threat posed by death and violence.

Back in 1998 Deichtorhallen showcased a selection of Araki’s works entitled »Tokyo – Markt der Gefühle« (Tokyo – Market of Feelings). The forthcoming exhibition will also underscore the important standing of Japanese artists in photography, several of whom have previously been on display in Deichtorhallen (Japanese Photography, 2002/2003; Kiyoshi Suzuki, 2008/2009).

CATALOG
To accompany the exhibition Museum der Moderne in Salzburg has brought out a book with texts by Margit Zuckriegl and Christian Martin Fuchs. It is published by Verlag publication PN°1 Bibliothek der Provinz. 136 pages, with b/w illustrations, size: 30 cm, bound, in German, Price: EUR 22.-

House of Photography in the Deichtorhallen, in collaboration with the Fotomuseum Winterthur, is devoting a major exhibition to the Russian-Ukrainian artist Sergey Bratkov (b.1960). It includes some 130 works and provides a deep insight into his photographic oeuvre since the early 1990s, which is socially critical and politically motivated, yet with a lyrical edge.

The wild, even lurid, photographs, picture cycles, and videos, verging at times on the limits of the truth and good taste, form the expressive core of his prodigious and extensive output. A direct, at times unsparing portrayal of everyday life and social coexistence since the collapse of the Soviet Union runs through his work like a red thread, occasionally evoking a strident theater of the new reality.

In his Bratkov, who grew up in the Ukrainian industrial city of Kharkov, lays bear in his picture cycles the obsolete ideological cliches of the Soviet era just as much as the newfound muscle-flexing capitalist drive of the east. His documentary portraits of steelworkers (Steelworkers, 2003), homeless children (Glue Sniffers, 2000) and women wanting to start a family (Princess, 1996) cite the hallmarks of nationalistic socialism by ostensibly classifying individuals in stereotypes.

However, what Sergey Bratkov seeks in his »portrayals of heroes « is not the conformity of the group, behind which the individual might be able to hide. Instead, his photographs launch a provocative jibe at post-Soviet society by deliberately flouting aesthetic and moral taboos. By heightening the scenes he observes with irony and subjectivity, Sergey Bratkov invents a new form of Social Realism in his photographs, unmasking critical socialism as fictitious and ideologically defunct.

The exhibition »Nobuyoshi Araki- Silent Wishes« will be on display at the same time in House of Photography.