Reflecting the South London Gallery's approach to artistic programming over the past decade, the show includes works by living British and international artists from several generations and at different stages in their careers. In the main exhibition space British artists Fiona Banner, recipient of the next Duveen's Commission at Tate Britain, and Mark Titchner, show alongside Lawrence Weiner and Robert Barry, both key figures in the history of American conceptual art. 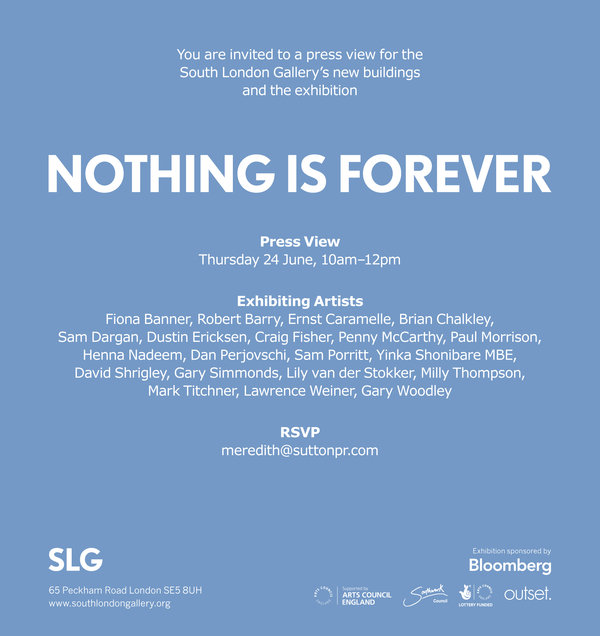 A 24 carat gold leaf wall painting, a 40 metre high design on a tower block and a 5,000 word film script hand-written directly on the gallery walls are brought together in the South London Gallery’s next exhibition, Nothing is Forever. Celebrating the completion of the SLG’s £2 million building project, this ambitious group show brings together wall paintings, drawings and text pieces by 20 British and international artists.

Seamlessly integrating art and architecture, and with each work destined to be embedded in the fabric of the buildings when painted over at the end of the show, Nothing is Forever marks an important and transitional moment in the South London Gallery’s history. As the institution expands into a formerly derelict house and a new building incorporating the surviving walls of a former lecture theatre and library, the exhibition draws visitors through the SLG’s new and existing spaces with a variety of approaches to making art directly on the walls.

Reflecting the South London Gallery’s approach to artistic programming over the past decade, the show includes works by living British and international artists from several generations and at different stages in their careers. In the main exhibition space British artists Fiona Banner, recipient of the next Duveen’s Commission at Tate Britain, and Mark Titchner, show alongside Lawrence Weiner and Robert Barry, both key figures in the history of American conceptual art.

Huge text pieces by these artists for whom words and language are both the subject and material of their work create a conversation which is both thought-provoking and visually impressive. Text features again, albeit very differently, in the new Clore Studio, where Dan Perjovschi’s jottings inspired by current affairs establish a humorous dialogue with David Shrigley’s wall drawing and Lily van der Stokker’s candy-coloured musing on the passage of time.

Capturing something of the SLG’s character as an exhibiting institution and celebrating the gallery’s role in the local community, Nothing is Forever includes a spectacular work by Anglo Nigerian artist Yinka Shonibare MBE on the gable end of a thirteen-storey tower block. Clearly visible from several viewpoints in the area, including Peckham which is home to one of the largest overseas Nigerian communities in the world, the work is located on Sceaux Gardens housing estate where the SLG has been running artist-led projects with and for residents over the past two years. The 40 metre high work is based on a design specially conceived for the project. It makes reference to patterns usually associated with African dress but in fact derived from Indonesian wax batik designs, mass produced by the Dutch and sold to the colonies in West Africa.

Paul Morrison enhances the beautiful double-height atrium in the Matsudaira Wing with a stunning wall painting in gold leaf. Taking source material from his extensive collection of botanical drawings, Morrison renders an extraordinary combination of outsized plant life, furthering the play on interior and exterior views which characterises the space and indeed the SLG’s whole expansion project. In the stairwell and corridors Gary Woodley’s linear geometric shapes cut across architectural features to subtly alter our reading of the spaces, whilst Ernst Caramelle’s hand-painted blocks of colour transform three domestic-scale galleries into abstract works of art.

On the top floor, the Outset Artists’ Flat is opened to the public to reveal the results of an experimental project started by Sam Porritt. Porritt was invited by the SLG to stay in the flat for two nights and make a work in situ before inviting an artist of his choice to do the same, and so on. In this way, works in a broad range of styles and techniques have been brought together, ranging from Milly Thompson’s line drawing based on a dinner party scene in Woody Allen’s film ‘Interiors’ through to decorative abstract paintings by Henna Nadeem and Gary Simmonds, and Porritt’s conceptual landscape incorporating stones, peanuts and snippets of his hair which he cut during his stay.

Over the past five years the South London Gallery has gained a reputation for its award-winning education programmes, inspiring local residents to get involved in contemporary art. In celebration of this, Nothing is Forever includes four parallel wall projects, each made by artists working collaboratively with one of the key groups with which the SLG has on-going relationships. Orly Orbach and Joanna Brinton have worked with children attending the SLG’s weekly artist- led workshops on Sceaux Gardens estate to create If Wishes Were Birds: an expression of residents’ desires for their estate on the hoardings around Lakanal which was tragically damaged by fire last year, while Matthew Shaw has helped create a series of wall works throughout the estate. Daniel Lehan has worked with children from Charlie Chaplin Adventure Playground to adorn a 100 metre long hoarding on Camberwell New Road, and Henna Nadeem has collaborated with pupils from St Saviour’s and St Olave’s secondary school to design a wall work in their building.