True to Nature: Drawings, Watercolors, and Oil Sketches at Stanford University. This exhibition presents 75 drawings, watercolors, and studies made during the 50-year career of one of America's most famous landscape artists. A lecture about the artist's work by guest curator Carol M. Osborne, Ph.D., is scheduled for Thursday, June 24, at 6 pm in the Center's auditorium. 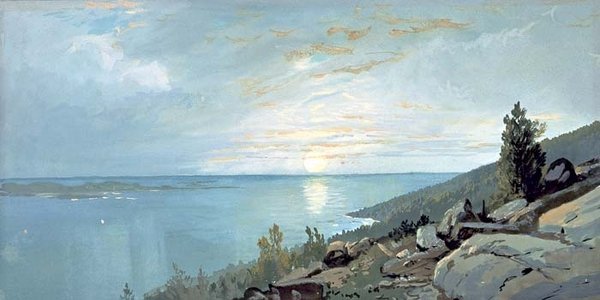 Cantor Arts Center at Stanford University presents 75 drawings, watercolors, and small oil studies made during the 50-year career of one of America’s most famous landscape artists. The exhibition “William Trost Richards—True to Nature: Drawings, Watercolors, and Oil Sketches at Stanford University” opens June 23 and continues through September 26, 2010. A lecture about the artist's work by guest curator Carol M. Osborne, Ph.D., is scheduled for Thursday, June 24, at 6 pm in the Center's auditorium. Admission to the museum, the exhibition, and the lecture is free.

“The works on view are highlights from a collection of nearly 250 artworks by Richards, inherited in 1905 by his youngest son and eventually given to the Cantor Arts Center in 1992 by M. J. and A. E. van Löben Sels. When Richards died, the artworks in his studio were divided among his five children. Each cluster contained luminous watercolors of the sea and shore, drawings in pencil and pen-and-ink, sketchbooks with highly refined drawings, and small oil studies that essentially surveyed the artist’s career,” explained Osborne. “The exhibition features selections from this beautiful and historically significant collection, and the associated catalogue documents the entire collection.”

Born in Philadelphia in 1833, Richards was a nature lover, whose romantic sensibilities informed his meticulously factual representations. His paintings of the Adirondacks and other East Coast sites place him among the artists of the Hudson River School, painters who rendered the natural world in panoramic canvases of precise detail and finished surface. His close study of nature led Richards to make hundreds of pencil sketches of trees, rocks, and plants. His nature studies were influenced by John Ruskin, the British art critic whose doctrine of truth to nature found ready acceptance in the New England climate of Emerson and Thoreau.

In the 1870s, when landscape painting in the Hudson River School style was going out of fashion, Richards turned instead to marine and coastal subjects. Watercolor became a favored medium, and Richards developed a masterful technique reflective of the overall development of watercolor in American art. Collectors treasured his luminous scenes of surf rolling onto the sandy beaches of Rhode Island near Richards’s summer home on Conanicut Island, or crashing against the rocks of Cornwall, where he often painted. The mythic castle of King Arthur on the cliffs of Tintagel was another favorite subject.

The exhibition and lecture are made possible by support from the Halperin Exhibitions Fund, the Hohbach Family Fund, and Cantor Arts Centers Members.