A survey of the work of the world famous photographic duo of Inez van Lamsweerde and Vinoodh Matadin. Foam will show approximately 300 photographs spanning 25 years of the duo's career. Art, fashion and portrait works all exist next to each other. On show also a selection of original prints from the archive of Karl Blossfeldt. He employed photography to study so-called primal forms from nature. Like his mentor Meurer, he wanted these forms to provide a source of ideas for architects, painters and graphic artists. 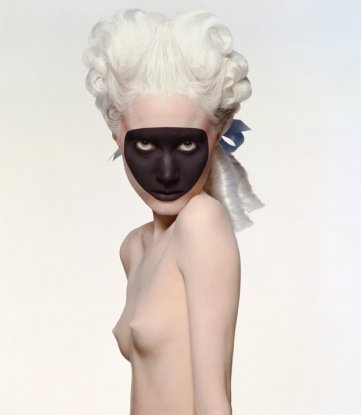 Foam_Fotografiemuseum Amsterdam proudly presents a survey of the work of the world famous photographic duo of Inez van Lamsweerde and Vinoodh Matadin. Inez and Vinoodh began their work together in 1986 in Amsterdam. Now, 25 years later, with their campaigns for fashion houses such as YSL, Chanel, Balmain, Gucci, Louis Vuitton and Chloé, and with regular publications in W Magazine, Vogue and The New York Times, they are amongst the most important photographers in the world today. They are amongst the very few artists that have successfully crossed the line drawn between fashion and art and have managed to simultaneously maintain careers in both fields. The team has lived and worked in New York since 1995.

Foam will show approximately 300 photographs spanning 25 years of the duo’s career. Art, fashion and portrait works all exist next to each other. By disregarding any chronological order the combinations of images are based on personal, formal, social, political and intuitive associations that show the way the artists have lived with the images for 25 years.

Inez van Lamsweerde en Vinoodh Matadin launched their international career with the publication of ten pages in the British magazine The Face in 1994. It was here that for the first time in a fashion series the models and the backgrounds were photographed separately and subsequently combined into a single image by use of a computer. The series typified van Lamsweerde and Matadin’s hyper-realistic style and was made to celebrate and subvert fashion within the context of a magazine.

Dubiousness is at the base of practically every image they make. Their work is ambiguous in every sense of the word and balances deliberately on the thin rope between fashion and art, perverting both worlds, mirroring the strangeness of everyday life through an extreme enlargement of a singular part.

Since each photograph demands its own dimensions, and some have been shown over the years and have their own existing size and frame style, the exhibition will have a dynamic flow and will read like a huge stream of images – forming one flowing, pulsating sentence rather than divisions that are grouped by size or subject. This showing will draw the viewer into Inez and Vinoodh’s world of constant dualism, duality and ambiguity, as well as their obsession with giving meaning to the surface, while oscillating between horror and beauty, the grotesque and the quiet, and the spiritual and the banal.

This exhibition was made possible thanks to Audi and Delta Lloyd.

Foam_Fotografiemuseum Amsterdam presents a selection of original prints from the archive of Karl Blossfeldt. Blossfeldt (b. Germany, 1865) was self-taught and had kept up a keen interest in nature since boyhood. As a sculptor and modeller at an art foundry, he drew inspiration from flowers and plants for decorative motifs. In the 1890s his career took a new direction when he joined a study project in Italy led by Moritz Meurer. It was then that Blossfeldt began to systematically collect and photograph plants.

This documentation was for artistic use rather than scientific. Blossfeldt employed photography to study so-called primal forms from nature. Like his mentor Meurer, he wanted these forms to provide a source of ideas for architects, painters and graphic artists. Blossfeldt used photos from his archive as teaching material in his lectures at Berlin’s School of Applied Arts. In the course of his life he produced around six thousand photos.

Blossfeldt photographed flowers and plants with large cameras that he built himself. He preferred wild plants and weeds, since these showed nature’s primal forms far better than cultivated flowers and plants. He also documented flora at various stages of development. Blossfeldt cut unnecessary twigs and leaves away, before photographing his specimens close up against a neutral background. This enabled him to register their regular geometrical patterns. Blossfeldt is considered among the artists of the New Objectivity movement.

It was only later in life that Blossfeldt received recognition as a photographer. In 1926, Berlin’s Nierendorf Gallery hosted Blossfeldt’s first exhibition and published a volume entitled Urformen der Kunst in 1928. It was an international success and is considered a seminal work in the development of photography. A second book, Wundergarten der Natur, appeared in 1932. Blossfeldt was not to enjoy his success for long, he died that same year.

Accompanying this exhibition, Foam Editions offers a unique selection of four modern prints from Blossfeldt’s original negatives in a limited edition of 150 for €250 per print. All are numbered and come with a certificate of authenticity from Die Photographische Sammlung/SK Stiftung Kultur in Cologne where Blossfeldt’s original negatives are kept. These prints are only available in the Netherlands from Foam Editions.

Thanks to the SK Stiftung Kultur and the Goethe Institute Amsterdam.

Foam is sponsored by the BankGiroLoterij, the VandenEnde Foundation and De Brauw Blackstone Westbroek.