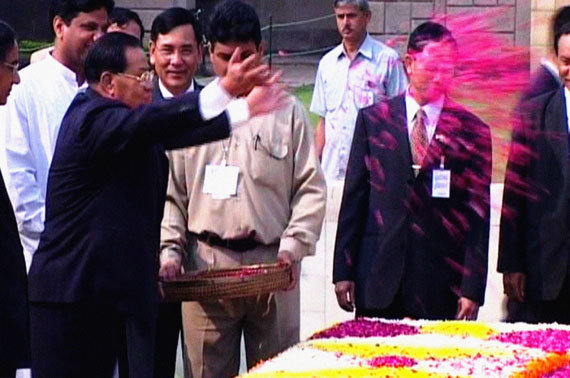 Being Singular Plural: Moving Images from India is oriented toward coproducing new work, facilitating research, and assembling a community of practitioners. A resolutely heterogeneous and ultimately unresolved exhibition, it attempts to avoid some of the pitfalls of surveying contemporary production in a given region.
The exhibition brings together a number of moving-image works by a select group of media practitioners who currently live in India and who are working in film or video rather than "new media." These images do not serve as windows onto the world, nor point to any transcendent truths, but are presented as they are, distinguished by their evidence. Jean-Luc Nancy formulates the screen as a "sensitive membrane [that] stretches and hangs between a world in which representation... [is] in charge of the signs of truth, of the heralding of a meaning, or of the warrant of a presence to come; and another world that opens onto its presence through a voiding where its thoughtful evidence realizes itself." The act of "voiding" or emptying out of representation, which is the resting place of evidence, points ontologically to the moving image as an end in itself rather than a means to an end that may lie outside of its surface. This embodiment of truth as it resides within the very structure and materiality of the image (or idea) overturns previous expectations of how the moving image communicates with the world. The artist-filmmakers Sonal Jain and Mriganka Madhukaillya of Desire Machine Collective, Shumona Goel with Shai Heredia, Amar Kanwar, and Kabir Mohanty reveal a craft that is based on the principles of practice, process, and perception.
In each instance, the singularly plural and plurally singular nature of being and of art remains central.

On the occasion of the show, artist’s talks and lectures will be held on June 26 and 27 with the artists of the exhibition, Shumona Goel, Sonal Jain, Amar Kanwar, Mriganka Madhukaillya, Kabir Mohanty, as well as the curator of the exhibition, Sandhini Poddar, and film scolars.
Complementing this, the Deutsche Guggenheim, in cooperation with Kino Arsenal, will present the film and discussion series Moving Politics – Cinemas from India, curated by Dorothee Wenner and Nicole Wolf.

A three-part film program at Kino Arsenal on the occasion of the exhibition Being Singular Plural: Moving Images from India at the Deutsche Guggenheim.

Catalogue: 176-page bilingual catalogue will be available in English and German, 45 euros