Asterisms is a two-part sculptural and photographic installation by the Mexican-born artist. The exhibition, in which the two bodies of work play off each other in a provocative oscillation between the macro and the micro, invokes several of the artist's recurring motifs: the traces of erosion, poetic encounters with mundane materials, and the ever-present tension between nature and culture. 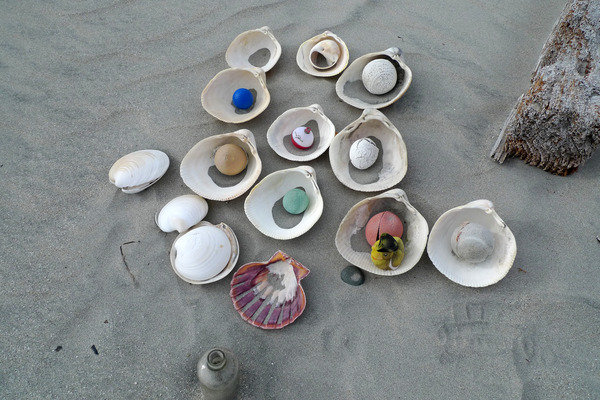 From July 6 through October 21, 2012, Deutsche Guggenheim presents Asterisms, a two-part sculptural and photographic installation by the Mexican-born artist Gabriel Orozco and the eighteenth project in Deutsche Guggenheim’s series of commissions. One component of the exhibition, Sandstars, responds to the unique environment encountered in Isla Arena, Mexico, a wildlife reserve, which is simultaneously a whale mating ground, whale cemetery, and industrial wasteland. Orozco has worked there before, having extracted from its sands the whale skeleton that forms the sculpture Mobile Matrix (2006), now permanently installed in the Biblioteca de México José Vasconcelos in Mexico City.

His return to this sanctuary yielded entirely new results in response to the voluminous amounts of waste deposited there by currents in the Pacific Ocean. He created a large sculptural installation from the refuse he collected by subjecting it to taxonomic arrangement on the gallery floor. This monumental sculptural carpet of nearly 1,200 objects is accompanied by twelve large-scale gridded photographs of images of the individual objects in a studio setting, organized typologically by material, color, size, and so on. An additional grid photo documents the landscape from which the objects were retrieved, along with incidental compositions made in situ from the castaway items. Also on view is a video work, Whale after waves (2012), which illuminates the environment of Isla Arena.

Astroturf Constellation similarly explores taxonomic classification but on a completely different scale. It comprises a collection of miniscule bits of debris left behind by athletes and spectators in the Astroturf of a playing field in New York City. Orozco displays these myriad items, again numbering nearly 1,200, on a large platform. As in Sandstars, the objects are displayed alongside thirteen photographic grids, creating a visual ricochet between an individual object and its photographic representation.

The exhibition Asterisms overall, in which the two bodies of work play off each other in a provocative oscillation between the macro and the micro, invokes several of the artist’s recurring motifs, including the traces of erosion, poetic encounters with mundane materials, and the ever-present tension between nature and culture. It also underscores and amplifies Orozco’s subtle practice of subjecting the world to personal, idiosyncratic systems.

Following its Berlin showing, the exhibition will be presented in New York at the Solomon R. Guggenheim Museum as part of the Deutsche Bank Series at the Guggenheim this fall.

Catalogue
The accompanying catalogue, Gabriel Orozco: Asterisms, with an essay by Nancy Spector, Deputy Director and Chief Curator, Solomon R. Guggenheim Foundation and Museum, is available in English and German for 27 Euro.

Guided tours
Free guided tours are offered daily at 6 p.m. The popular Lunch Lectures are held each Wednesday at 1 p.m. and deal with individual topics of the exhibition. The offer is rounded off by the ‘I like Mondays’ Lectures, each Monday from 11 a.m. to 8 p.m.