In her first solo exhibition Jill Magid continues to explore means of penetrating closed systems of power. Magid has developed a conceptually rigorous, largely performance-based practice in which she seeks to engage institutions of power on a personal, intimate level. Artist/composer Christian Marclay transforms sound and music into visual and physical forms through performance, collage, sculpture, large-scale installations, photography, and video. The first in a two-part exhibition, 'Off the Wall Part 1: Thirty Performative Actions' focuses on actions using the body in live performance, in front of the camera, or in relation to a photographic or printed surface, or drawing. 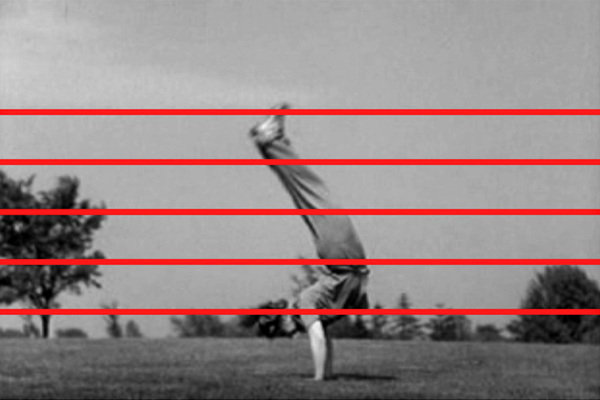 Jill Magid: A Reasonable Man in a Box

In her first solo exhibition in an American museum, Jill Magid (b. 1973) continues to explore means of penetrating closed systems of power. Taking institutional structures, rules, laws, and language as her media, Magid has developed a conceptually rigorous, largely performance-based practice in which she seeks to engage institutions of power on a personal, intimate level. Developed for the Whitney Museum’s first-floor Anne & Joel Ehrenkranz Gallery, Magid’s A Reasonable Man in a Box takes its point of departure from the “Bybee Memo,” a controversial 2002 document signed by Jay Bybee, Assistant Attorney General of the United States Department of Justice’s Office of Legal Counsel, and declassified by President Obama in 2009.

The document discusses acceptable methods of “enhanced interrogation” of a high-level Al Qaeda operative, including the use of a confinement box. As Whitney curatorial assistant Nicole Cosgrove writes in the introductory text, “A Reasonable Man in a Box explores the perversion of reason, and the malleability of language and law. Using video, collage, and text, Magid transforms an international and political issue into a physical and intensely personal experience. The installation represents an artist’s desire to engage a legal memo—and her government—in dialogue, and to unlock a closed system of legal language with a single rhetorical question."

Artist/composer Christian Marclay (b. 1955) is known for his distinctive fusion of image and sound. Celebrated as a pioneer of turntablism, Marclay transforms sound and music into visual and physical forms through performance, collage, sculpture, large-scale installations, photography, and video. This groundbreaking Whitney exhibition — activated by daily concerts and continually evolving — explores Marclay’s approach to the world around him with a particular focus on his “graphic scores” for performance by musicians and vocalists.

Visitors to the Whitney will be encouraged to mark up a wall-sized chalkboard, with musical staff lines, thereby creating a collective musical score which will be performed throughout the run of the show. Other Marclay scores, including the premiere of a new scrolled vocal work forty feet in length and three scores conceived as projections, will be continually on view and performed on a regular basis. World renowned musicians and vocalists, some of whom have been regular collaborators with the artist for three decades, will interpret a dozen scores, enabling museum audiences to experience a less well known aspect of Marclay’s varied art practice.

For nearly thirty years, Christian Marclay has explored the distinctive fusion of image and sound through collage, performance, installation, photography, sculpture, and video. Although renowned as a pioneer of turntablism (the use of records and turntables as musical instruments) and sometimes referred to as a musician or composer, Marclay notes: “I make music the way a visual artist would. Sound and image are very closely intertwined in my work.” Since the late 1990s, Marclay has made a number of “graphic” scores, which defy the conventions of traditional music composition. Intended to elicit a musical response from performers, these works are created from videos, photographs, found images, and readymade objects culled from our everyday surroundings. Some of the scores on view here include: Ephemera (2009), a collection of printed matter such as restaurant bills, flyers, book covers, and throwaway packaging decorated with musical notations; Graffiti Composition (1996–2002), a portfolio of images documenting the public’s response to blank sheet music pasted around

the streets of Berlin; and Manga Scroll (2010), a new lithograph based on onomatopoetic words found in comic books. During this exhibition, Marclay’s scores will be performed by approximately fifty celebrated musicians, some of whom have collaborated regularly with the artist during the course of the past three decades. These artists will appear in daily performances and in open rehearsals. Marclay’s scores are open to a multitude of interpretations; a single score inevitably yields radically different performances. The scores, instruments, and performance objects are displayed along with video documentation and recordings of past performances. By revealing what prompts the musician—whether the video projection Screen Play (2005) or the marks created by the public in Graffiti Composition—Marclay challenges his audience to play a more active role, altering the traditional dynamic among composer, performer, and listener. The artist’s newest piece Chalkboard (2010), created by visitors marking a chalkboard wall printed with staff lines in the gallery, will be periodically interpreted by musicians during the exhibition. We hope you will join us for multiple performances of these scores; each one will be completely different. Marclay’s unconventional approach to music ensures you will never hear the same thing twice.

The first in a two-part exhibition, Off the Wall Part 1: Thirty Performative Actions, focuses on actions using the body in live performance, in front of the camera, or in relation to a photographic or printed surface, or drawing. Each action displaces the site of the artwork from an object to the body, acting in relation to, or directly onto, the physical space of the gallery.

The wall and floor become the stage for these actions: walking on the wall, slamming doors, slapping hands against the wall, gathering sawdust up from the studio floor, walking on a painting, striding and crawling around a small cylindrical space, writing or drawing on the wall and floor, or performing a striptease behind the transparent plane of Duchamp’s Large Glass. The exhibition also includes a number of works that reveal the underlying theatricality of the performative action and the ways in which artists stage the self in images that question conventions of identity, gender, and the body.

Off the Wall Part 2: Seven Works by Trisha Brown
curated by Limor Tomer, the Whitney's adjunct curator of performing arts
from September 30 through October 3, 2010

Off the Wall Part 2: Seven Works by Trisha Brown, features the Trisha Brown Dance Company, on the occasion of the company’s fortieth anniversary, performing iconic works from the 1970s, including the spectacular Walking on the Wall, originally performed at the Whitney in 1971; performance films and a sound installation, Skymap, will also be on view. Works will be performed daily from September 30 through October 3, 2010, in the Second Floor Galleries, Sculpture Court, and outside the Whitney Museum of American Art on East 75th Street. Planned performances include Man Walking Down the Side of a Building, Falling Duet I, Leaning Duets I and II, Spanish Dance, Floor of the Forest, and the sound installation Skymap.

As a coda to the Biennial, the Museum’s fifth floor is devoted to artists in the Whitney’s collection whose works were shown in Biennials over the past eight decades. Collecting Biennials underscores the importance of previous Biennial exhibitions in the Museum’s history and the formation of its collection. Artists on view include Mark Rothko, Ed Ruscha, Louise Bourgeois, Willem de Kooning, Richard Diebenkorn, Edward Hopper, Jasper Johns, and Barbara Kruger. Work by one of the artists in 2010, George Condo, is included in the mix.