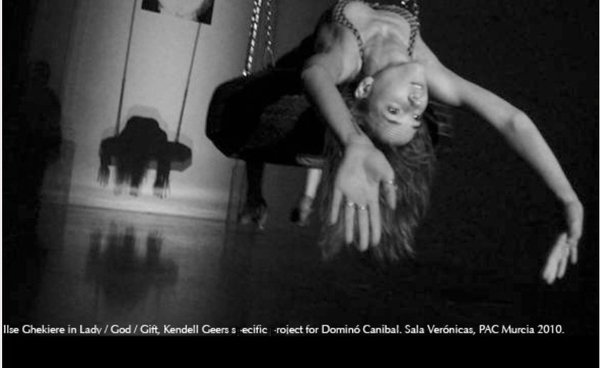 He frequently dissects the violence and hypocrisy of the white middle class South African in works denouncing the apartheid system in South Africa. Despite having experienced it himself first hand, his installations invite us to adapt our own position to racism, offering choice options and inviting us to reflect on the decisions adopted, which are later extended to other social conflicts today. The balance between attraction and repulsion comes with the choice of ethical themes and an attempt to speak to the sensibility, a feature which, to his way of thinking, has been lost in art today, which does not raise its sights beyond the material.

The artist takes violence and sexuality and brings them to an extreme point in order to challenge the spectator. This provocative attitude confronts the public with a series of routine visual codes and exhibits them with a radicalness that touches the spectator’s nerve of moral principles.

The chosen curator for this edition is Cuauhtémoc Medina. Taking a completely different tack to Bourriaud, Medina is working with another exhibition format, using one single venue over a period of 12 months. In it, successive artists will address their individual work based on the work by the preceding artist at the same venue.

Explaining the implications of this way of working, Medina says “the idea behind the project has to do with positing an alternative model for an art festival, different from biennials, museums and site-specific interventions, placing it in a territory of practical continuities and discontinuities between artists and creative displacements.”

“My starting point is the operation of the game of domino, which is a very widespread transcultural point of production. Based on games of Chinese dice, it was then taken to Italy, from where it spread to the new world with the Spanish and Portuguese colonisations, becoming very popular in Latin America. From a historical viewpoint, it reflects the migratory route of the game from Cathay to the Caribbean, passing through the European routes of early capitalism; it is a map of the historical process that led to the modern world. Furthermore, the ideological use of the so-called “domino effect” brings to mind the terrors of the Cold War and beyond”.

Speaking about the exhibition DOMINÓ CANÍBAL to be held at Sala Verónicas in Murcia from January through December 2010, Medina explains that “the domino effect refers to the chain of historical and argumental moments that define the links between colonisation, post-colonialism and capitalist globalisation. Following the multicultural debate of the 1980s and 90s and with the expanded art globalisation, global flows and differences in cultural and economic integration were defined.” All these implications are explored in the forms of artistic participation and interaction, more than in terms of any particular thematic directives.

Maintaining the integrity of individual interventions, the format suggested by the curator advocates a working method in which each artist acts on what has already been made by the preceding artist, either destroying it, appropriating it or reworking it, setting into motion a series of dynamics more closely associated with collective practices while underscoring the idea of process.

PAC MURCIA 2010, organised by the Dept of Culture & Tourism of the Region of Murcia, will be rounded off by OFF PAC, the programme organised by local art institutions, a seminar organised in conjunction with CENDEAC and artist-in-residence scholarships in Berlin and in Mexico City for artists from Murcia.