La ronda. The work of the Moroccan born French artist, who has lived in Switzerland for years, is done in the sphere of sculpture and installation and includes video and photography. Her works are based on a study of specific aspects of social and political history such as the political radicalisation of the fifties and the emergence of the two blocks as a consequence of the Cold War. Echakhch occupies Capella MACBA and undertakes a sculpture project designed for that space. 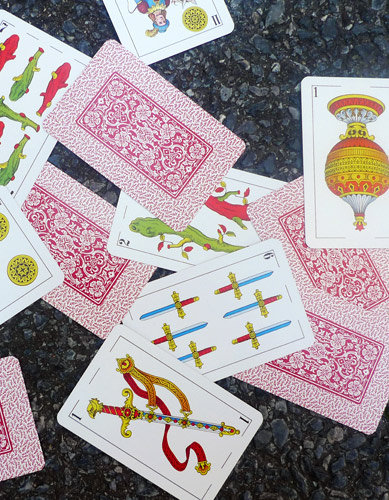 Carbon paper, sugar, carpets, tea glasses... Latifa Echakhch (El Khnansa, Morocco, 1974) may use everyday materials in her works, but the result is by no means ordinary.
Spanish playing cards, tartrazine (a food colouring used as a cheap substitute for saffron) and flagpoles are the three central elements in an intervention at the Capella MACBA produced for what is the first exhibition in Spain by an artist whose work has been shown at the Tate Modern (London) and the Kunsthalle Fridericianum in Kassel. It was in March that the Peruvian artist Armando Andrade Tudela (Lima, 1975) fired the opening shots as the Capella MACBA embarked on a new line of action aimed at presenting works especially produced for this exhibition space. Now, Latifa Echakhch writes the second chapter with an installation (really, three installations, but fused into a single project) that takes its inspiration from waves of North African immigrants, fleeing poverty or taking part in warlike expeditions, that have settled in Spain, over the centuries. However, the work also forms a dialogue with Echakhch’s own origins. Though she was born in Morocco, the French artist lives between Paris and Martigny (Switzerland). It is precisely ambiguities of meaning, with all their implicit contradiction, paradox and derision, that form the basis for Echakhch’s non- conformist strategy.

The physical displacement of certain signs of identity to contexts or supports where they take on one or more new meanings or reveal unexpected or shocking aspects of their original meaning. This is a basic characteristic of the poetic strategy that Latifa Echakhch employs. Echakhch is an artist willing to use any language and technique available, whether installation, video, sculptural objects, humble materials from everyday life or "happenings". In 2005, she filmed a major political demonstration in Paris, as protestors marched along a boulevard, followed by footage of an efficient team of road sweepers and refuse collectors, who quickly left the route clean once more. All in just 23 minutes. According to Echakhch, "There are five demonstrations in Paris every week, but nothing changes. That is the poor heritage left by the French Revolution and May '68".

Two years previously, in 2003, Echakhch had pinned around a dozen airmail envelopes, shaped as receptacles, to the wall of a Bangkok gallery. Over each, a 9 mm hole was drilled, imitating the impact of gun bullets. The envelopes, which contained sawdust from this drilling, were addressed to the artist’s European home from her address in Thailand in a subtle, provocative and aesthetically striking way of calling on the spectator to think about the bloody events that surround the fight against drug trafficking: some 1,500 violent deaths took place over the few weeks that this Morocco-born artist resided in the Thai capital.

Echakhch’s invitation to critical reflection and her fascination with ambiguity are closely bound up with her status as an international artist in a global world. In Espace à remplir par l’étranger, she roughly copied the text that gives her work its title ("Space to be filled by the foreigner") onto the wall. The phrase is taken from administrative documents that immigrants must complete in order to obtain a residence permit. At the close of the exhibition, the wall was restored to its original state – a task usually reserved for immigrant workers.

At the Museu d’Art Contemporani de Barcelona (MACBA), Echakhch presents three new installations produced especially for the centre, all relating to human flows from North Africa to Europe over the centuries, including many people who have settled in Spain. The three pieces intertwine to form a single intervention in the exhibition space of the central nave in the Capella MACBA.

The central piece, Fantasia 2010, is formed by fourteen flagpoles, each between six and ten metres in height, distributed at different angles, from 60 to 90 degrees, around the exhibition space. The title alludes to the so-called "Moroccan Fantasy", a traditional festive and sporting event at which a group of men on horseback fire their guns in unison as they gallop along. The installation also refers to a characteristic image in the squares of Brussels and Luxembourg, where many international organisations have their headquarters. Outside them are rows of flags from the countries these bodies represent. Stripped of their flags and, therefore, of their national colours and coats of arms, and distributed strategically to generate different perspectives and volumetric rhythms, the poles that form this fantasy invite us to think about the relative and reversible nature of national symbols and the identity they represent, whilst also appearing to champion the idea of multiculturalism.

In Echakhch’s second installation, Eivissa, 2010, the Spanish playing cards used to play the game la ronda (which means "the sentry path" and gives the exhibition its overall title), popular both in Morocco and Spain, stick out from under pieces from the concrete platforms installed on Ibiza after the Spanish Civil War in order to build camps for the Moroccan soldiers that General Franco enlisted in his army. By bringing together these two elements, spaces and rituals of transition between two countries, between two cultures, the artist suggests a dialectic relation between the game and the dogmatic, between the shared and the imposed, between what is fluid and transitory in nature and what is imposed as definitive but which is similarly doomed to fall into ruin. Finally, the artist herself painted the windows in the apse of the Capella MACBA using tartrazine, an artificial colouring used by the food industry as a cheap substitute for saffron and known as E102 or Yellow 5. The result is a bright yellow colour that modulates the light coming in from the exterior, emphasising both the intellectual suggestion and the sensual qualities that are so characteristic of Echakhch’s installations.

Born in 1974 in El Khnansa (Morocco), Latifa Echakhch lives and works in Paris and Martigny (Switzerland). Her work has featured in numerous solo and collective exhibitions, at such centres as: Le Magasin in Grenoble; the FRAC Champagne-Ardenne in Reims; the Tate Modern in London; CAC Vilna; the ArtFocus biennial in Jerusalem; Manifesta 7 in Bolzano (Italy); the Kunsthaus in Zurich; and the Swiss Institute in New York, amongst others. This is Echakhch’s first show in Spain.