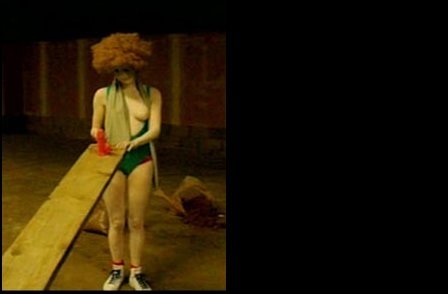 Michael Benevento is pleased to announce Everlasting Gobstopper, a group show with Spartacus Chetwynd, Hélio Oiticica, Lil Picard, Pipilotti Rist, Eva Rothschild, Cindy Sherman, and Michael E. Smith. The exhibition brings together seven artists working in video, painting, photography, sculpture, and installation that are conceptually united by mutual investments in vernaculars of trauma, psychology, appropriation, gender and sexuality. These works transform the white cube gallery into a site of possibility: an abstracted aftermath of a pagan celebration, a visceral and ritualized situation.

Amping up the scene, Hélio Oiticica and Neville D’ Almeida’s Cosmococa (1973) photographs conflate and collapse the historical relationship between cocaine, Coca-Cola, and the star-making machine, opening multiple dynamics between The Americas and capitalism though popular signifiers that threaten to erase all cultural difference. The CC5 Hendrix War photographs lace the cover image of Hendrix’s posthumous album War Heroes with lines of cocaine and a matchbook bearing the Coca-Cola brand name, while the CC3 Maileryn photographs modify images taken from Norman Mailer’s biography of Marilyn Monroe.

Offering the promise of extreme pleasure and wired through a wall of television monitors, Spartacus Chetwynd’s Hermito’s Children (2008) parodies and complicates the television melodrama while dealing with issues of transgender identity in a confrontational fictitious space laced with camp and dark humor. Not to be left behind in the headlong rush towards ecstasy, Pipilotti Rist’s Sexy Sad I (1987) blends text and and varied versions of The Beatles’ Sexy Sadie with video of a nude male body -- looped to imply that his sexualized, yet helpless, body will run through this unspecified surreal forest for eternity.

Residing in the psychic space of aftermath and abandon, the sculptures and works on paper by Eva Rothschild underscore issues of landscape with alienation and melancholy. In Black Psycore (1999), a poster of a wolf is altered with black gouache, Rothschild creates a dark silhouette that is mirrored in the slick, sleek surfaces of her Black Mountainside (2001) sculpture. Melancholia, in turn, informs gestures of vulnerability with Michael E. Smith’s paintings and sculptures. Embedding paint, oil and/or resin on everyday materials including clothes and industrial foam to produce scarred or birthmark like surfaces. Smith’s work often attempts to calcify components of the remains of working-class American life into starkly emotive objects.

A documentation of the leftover is central to both Cindy Sherman’s Untitled (1987) and Lil Picard’s Burnt Ties (1968), which complete the exhibition, almost serving as aesthetic bookends to envelop the diversely dark and Dionysian environment. Displaying a wig, autumn leaves, pinecones and a pair of blood stained panties and a singed burnt bow tie respectively, Sherman’s photograph and Picard’s sculpture propels the legibility of the show, suggesting different (if implausible) relations within the current environment and the works displayed therein.