The exhibition is dedicated to the history of painting since the 1950s. On the basis of the museum's own collection, it is specially concerned with Vienna deepening the aspects of self-reflexive, autonomous painting from monochromatic works through paintings based on all-over principles to randomly-generated pictures. The second part of the exhibition follows the incipient redefinition of picture-making and painting per se through the inclusion of real objects and by bonding them to architectural space and installations. 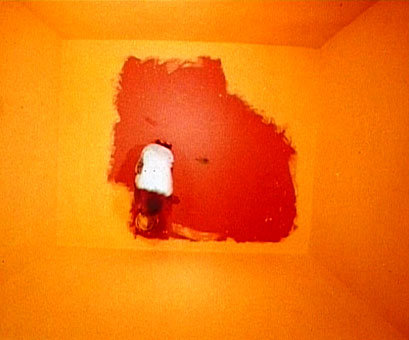 The exhibition is dedicated to the history of painting since the 1950s. On the basis of the museum’s own collection, it is specially concerned with Vienna deepening the aspects of self-reflexive, autonomous painting from monochromatic works through paintings based on all-over principles to randomly-generated pictures. Almost two hundred works testify to painting in the throes of a crisis in respect of traditional notions of the art form, the conception of picture-making, and the attempt to overcome them. Starting out from positions that were already historical at the time, an arc is drawn into the present and the impressive–in terms of both quantity and quality–Austrian contribution to these developments is presented.

The tendency–central to modernity–of practitioners to reflect on the medium was already the focus of a presentation of the Daimler collection earlier this year in “Pictures about Pictures”. In “Painting: Process and Expansion” this undergoes a re-interpretation and re-weighting. The foreground here is taken up by the reduction to the fundamental processes of painting on the one hand and their expansion and dissolution in sculptural and/or spatially-linked strategies of painting on the other.

The presentation represents the continuation of one of the MUMOK programme foci which is aimed at reinvigorating and up-dating the painting discourse. In autumn of this year this focus will be rounded off with the exhibition “Hyper Real” which will be a comprehensive presentation of the USA-based trend in painting that is linked to the realist depictions. The Self-Presentation of Painting One of the various experiments and strategies of processual painting consisted in developing pictorial designs from the fundamental characteristics and interactions of colours instead of deriving them from concepts of narration and composition. Creatively-guided self- presentation of painting is generated in this context by means of painting on and over, by palette knife in-filling, dripping, spraying, dipping, pouring etc. Here the consistency of the pigment and its relation to gravity and the characteristics of the picture support become visible.

In their purest and most reduced form the results of processes of this nature are the monochromes by Yves Klein or the pattern-like, all-over structures to be found in Jackson Pollock’s “Drip Paintings”. The gestural and processual painting of art informel prepared the way but became increasingly academic and thus a target for antagonism for those painters who were revolutionaries. In depicting their principles there was also a belief that a higher truth could be expressed in painting in/of itself and a doubt in the possibility of originality by autonomous individual artists. In the 1950s and 1960s, in what can be considered the final acts, radical positions and inventions, these historical approaches and techniques have proved to have potential for succeeding generations.

The section of the exhibition dedicated to processual painting starts out from Jackson Pollock, Yves Klein, Morris Louis, Arnulf Rainer, Hermann Nitsch and Max Weiler and goes on to display a dense spectrum of differing, individual variants of this phenomena up to the present day including, amongst others, the positions represented by Joseph Marioni, David Reed and Bernard Frize. In a narrower sense the selection is restricted to picture-related painting and indicates numerous overlappings with other, related, contemporary approaches as can be most clearly seen in material or structural pictures. In the contemporaneous part, loans from Austrian artists such as Erwin Bohatsch, Herbert Brandl, Jakob Gasteiger, Hubert Scheibl, Thomas Reinhold, Andreas Reiter Raabe or Walter Vopava supplement the exhibition. They document the breadth and intensity of the discourse in Austrian art.

Liberation of the Pictorial Surface
The second part of the exhibition follows the incipient redefinition of picture-making and painting per se through the inclusion of real objects and by bonding them to architectural space and installations. Various forms of relating to reality and space were to be seen in Pop Art, Nouveau Réalisme, Fluxus, Viennese Actionism, Arte Povera, Minimal Art, and the geometric abstractionism of former Eastern bloc, all of which were mobilized against picture-fixated painting. While in North America and Western Europe around 1960 reality was integrated into works in the form of quotation and in ways that involved three-dimensional space, in the Eastern European countries it was the picture’s geometrical extension into architectural space that was reflected in the art that followed the post-Stalinist political liberalization during the so-called “gentle dictatorships”. The criticism levelled at the historical definitions of picture-making and composition led to a redefinition of painting and picture-making in relation to the viewer. Instead of the viewer being confronted with the work, an effort was made to integrate the viewer into the work. This radical realignment of painting in the 1960s and 1970s became the historical foundations for those artists who, from the late 1980s, after the end of neo-figurativism and narrative “New Painting”, went on to create modern, up-to-date forms of painting. The process created new connections between pictures and everyday objects which expanded both the definition and techniques of painting.

Thanks is due to the MUMOK partner the Dorotheum, and the media partners Der Standard, Infoscreen and Club Ö1.