Polonia and Other Fables 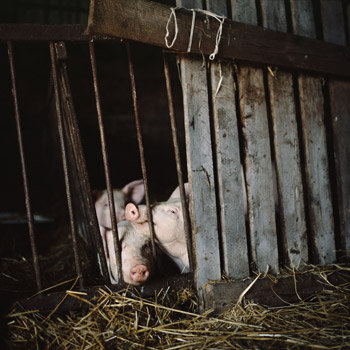 Allan Sekula (Erie, Pennsylvania, 1951) is one of the most outstanding contemporary documentarians. His series of photographs, films and – last, but not least – photo-historical and theoretical studies are directed toward the continuous, critical renewal and reinterpretation of the documentary genre, and at mapping out the deeper mechanisms of social processes. It is politics, history, social relations, ecology and the phenomena of climate change that emerge from his works, or as he himself says, the imaginary and real morphology of developed capitalism.

His works are the result of several years of methodical research work; during his travels to innumerable places around the world, he observes the effects of global capital on simple, working people. His works, an important part of which are also formed by the texts written alongside them, are usually produced in series, from huge panorama pictures to small photos of countless dimension, and he also arranges the individual series into larger units, as well. The exhibition, the result of a collaboration with the ZACHĘTA National Gallery of Art, Warsaw, includes both earlier and recent works of the artist, without any aim of a retrospective presentation.

At the centre of the exhibition stands a new work, a photo series, entitled Polonia and Other Fables (2007−2009), which "is about both the Polish community living in the United States and the Poland of today, about research into his personal roots, and about national symbols concealed in nationalist ideologies, the current American-Polish relations, the economy and market competition, and not least about the diversions and borders of the genre of traditional photography". In one of the pieces of his monumental work of many parts, Fish Story, the slide sequence, Walking on Water (1990−95), he photographed Poland at the time of the political changes, and more specifically, the birthplace of those changes, the Gdansk Shipyard, and how a large Socialist industrial facility of this nature copes with new economic-political conditions.

Already in his earlier works, Sekula had dealt with the world of work and workers (Untitled Slide Sequence, 1972), but contrary to the traditions of documentary photography, he is not interested in the world of those outcast from society, but rather in his own, petit bourgeois environment (Aerospace Folktales, 1973), and the relationship systems that define it, as, for instance, the social role of women (Meditations on a Triptych, 1973−78). His work in social criticism touches on such questions as environmental protection and anti-globalisation, an example of which could be the slide sequence immortalising the battle in Seattle, entitled Waiting for Tear-gas, 1999−2000, or the film about sea trade, Lottery of the Sea, 2006.

In collaboration with ZACHĘTA National Gallery of Art, Warsaw