Cosima von Bonin: The Fatigue Empire. The multitude of works made especially for Bregenz which lays out the differentiated repertoire of the artist in an unusually epic density, starting with her large canvas paintings, via textile sculptures and estranged reconstructions, through to voluminous installations. Starting now, the program of the KUB Arena, which was conceived as a platform for art and communication, will be activated with a contribution from the architects collective raumlaborberlin. With various media, past actions, projects, as well as theoretical references by the collective are presented here. 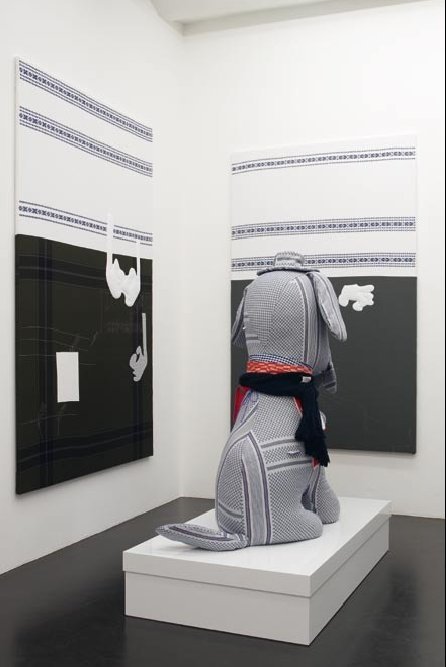 Cosima von Bonin is one of the most well-known artists of her generation. Especially since her participation in the last documenta, at which a large number of the works was spread over the entire course of the show, she is no longer an insider-tip and so-called artist’s artist. Nevertheless it is not easy to classify her artistic production. Even though in some of her works references to historical conceptual art and minimal art can be noticed, and critics like to cite her as an example of a feminist ar tist, her oeuvre eludes any straightforward label.

She first drew attention at the beginning of the 1990s when, instead of showing works of her own at her New York solo exhibition, she invited other producers of culture such as art critics, musicians and artists to present their photos, paintings or performance contributions. With her questioning of the function of the author, which clearly comes to expression especially in her early participator y gestures, sometimes she has intentionally, or unintentionally, directed herself against co-option by the art-system. If today, with canvas paintings made of found fabrics and cloths, or large textile mushrooms and cuddly toys, she controls this system or chooses to expose herself to it in a kind of over-affirmation, this is always associated with the stance that every work could be the last one and she could withdraw as an artist at any time. The titles, Relax - It’s only a Ghost or Roger and Out, describe this contradictory strength in a humorous, melancholy way.

The title of her exhibition for the Kunsthaus Bregenz, THE FATIGUE EMPIRE, could also be understood in this way, just as if, from the outset, she wanted to deflate expectations associated with a large solo exhibition at a renowned exhibition institution. All the more surprising then is the multitude of works made especially for Bregenz which lays out the differentiated repertoire of Cosima von Bonin in an unusually epic density, starting with her large canvas paintings, via textile sculptures and estranged reconstructions, through to voluminous installations. The architecture of the three floors of the KUB becomes a stage on which the textile and wooden figures seem to be actors - a move reinforced by soundtracks composed by Moritz von Oswald especially for Cosima von Bonin that can be heard at various points in the spaces of the KUB.
Similar to earlier occasions, Cosima von Bonin has called in reinforcements also for her presentation in Bregenz. Apart from Moritz von Oswald and his Trio, which will give a concert in the program of accompanying events, for the opening of the exhibition, the "Produzentin" from Toronto will give a performance. As quasilocal/Austrian support, and at the request of Cosima von Bonin, the KUB will show a series of films on Thomas Bernhard. With him she shares not only the proclivity for extended walks in natural surroundings, but also and especially, the critical and psychologically charged view of one’s own (art) system.

Anyone who thinks, however, that they can really come closer to Cosima von Bonin’s work through references to other cultural producers will experience at the Bregenz exhibition that, if at all, they constitute merely one facet of her creative work. The specific choices of everyday objects estranged in their sizes and materials, her emotional and cultural connotations play for the reception of her works a role equally as decisive as their formal shaping, their propor tions and combinations of colour. And when Cosima von Bonin reconstructs a room in the Kunsthaus with its particular formal and significant characteristics on a slightly smaller scale, enrobes a car bursting with masculinity in red-and-white checked fabrics made in Vorarlberg, thus making it effeminate, worlds open up here provoking at one and the same time social, cultural or even workimmanent readings.
That this Empire causes fatigue cannot really be believed, even when viewing the exhaustion of some of its inhabitants that is demonstrably put on show. Rather, this most comprehensive presentation to date of new works by Cosima von Bonin evidences the strength of an artist who, despite all self-doubt, knows exactly what she wants.

In conjunction her exhibition Cosima von Bonin will create a Panorama page to be published in the VN on July 10.

Starting in July 2010, the program of the KUB Arena, which was conceived as a platform for art and communication, will be activated more intensively than previously. Not so much to create an additional space for the classic presentation of contemporary art, but rather to open a venue for the negotiation of experimental forms of presentation and artistic production. The new program will be launched with a contribution from the architects collective raumlaborberlin (lit.: space laboratory Berlin).
In the KUB Arena, raumlaborberlin has undertaken an architectural intervention reflecting the main concerns of the group and simultaneously marking the space of the Arena as an autonomous location. A sloping plane cutting diagonally through the ground floor creates a second space which is accessible from the rear of the building. Above this slope, a walkable landscape made of doors from typical former East German 'Plattenbauten’ (buildings constructed from concrete slabs) permits new perspectives on the architecture of the Kunsthaus. The construction space beneath the sur face serves to present the so-called 'raumlaborwelten’ (lit.: space laboratory worlds) while indirectly referring to the inaccessible utility spaces in between the exhibition floors of the Zumthor building. With various media, past actions, projects, as well as theoretical references by the collective are presented here.

We often work with simple changes of perspective. What would be the case if this location were another location, different from the one we think we see in it? We make an effort not to be merely associative, but to develop concrete examples. This leads us to flood buildings, stage operas, build submarines, to organize festivals in skyscrapers, banquets beneath expressways, parties in underground railway stations, and also demonstrations. And every now and again we also build things. Temporary houses and objects which serve us as research station, stage, or prop in a new histor y for the location. raumlaborberlin

raumlaborberlin was established in 1999 as a platform for architects who since then have been pursuing a common aim in various working groups, namely a practice "beyond setting up rows of boxes for working, living, and sleeping." Inspired by currents of Utopian avant-garde architecture in the 1960s, the collective playfully subverts apparently indispensable values of architecture such as its durability, in order to develop, with temporary interventions and ephemeral spatial concepts, alternative design options at the margins of an all too one-dimensional concept of architecture. It investigates urban transformations in order to fathom new perspectives in architecture and urban planning beyond the capitalist logic of usefulness and profitability. Whether it be as a reaction to the conservative, regimented architectural policy in Berlin during the 1990s, to the increasing privatization of public places, or to the buildings and fallow spaces in the urban landscape that have been deserted by Utopias, the collectively realized actions challenge conventional social meanings of urban utilization of space and investigate alternative potentials for architecture and urban space as dynamically experienceable and malleable social interconnections.

Today our cities frequently have problems where thirty years ago an attempt was made to be progressive and visionary. Inner-city highways and their subways, dilapidated shopping malls and stinking parking houses, mass residential construction and its massive vacancy rate - we investigate these anaemic results of Utopian planning, we comment on them and develop scenarios for them. raumlaborberlin

Apart from the core team consisting of Francesco Apuzzo, Markus Bader, Benjamin Foerster-Baldenius, Andrea Hofmann, Jan Liesegang, Christof Mayer, Matthias Rick, and Axel Timm, there is regular co-operation with experts from various disciplines in theory and practice. Here, too, the collective practice is understood as a continually expanding field. By activating forgotten or deserted fallow urban spaces, new public spaces are created - spaces for action which do not exist somewhere beyond individual practice, but only become activated through it, opening up alternatives to existing everyday practices. raumlaborberlin does not produce within projective Utopias, but within graspable fields of possibility.
For more than a decade, internationally active raumlaborberlin has been defining with sustainable interventions an extended, socially dynamized concept of architecture. For the project Hotel Neustadt in 2003, the architects developed informal urban strategies which have become exemplary also for sustainably effective co-operation between residents and artists. With X-Wohnungen (2005), Der Berg (2005), Küchenmonument (2006), and Der Orbit (2006) there followed a series of experiments defining vacant urban spaces as theatrical free-space. Subsequently, Spacebuster (2009) was developed at the invitation of Storefront for Art and Architecture New York. It is a bus from which a pneumatic envelope unfolds as a bubble with which the urban space is temporarily opened for communal uses. Apart from temporary architectures in urban space, raumlaborberlin has developed works in co-operation with the Kunstverein Heidelberg, the ZKM in Karlsruhe, transmediale 2010, and Kampnagel Hamburg. This year the collective will be represented for the fourth time at the International Architecture Biennale in Venice.

Starting from an understanding of architecture as a socially, politically, and economically embedded practice, today a multiplicity of different strategies can be made out that investigate supplementary potentials of buildings and urban spaces to propose alternative designs in response to current urban planning processes. Frequently it is a matter of a practice that pursues the production of spaces of potential at the interface between architectural, urbanist, artistic, or even activist problematics. Within the framework of a two-part program of events, producers and theorists from various disciplines are invited to spend two weekends in the raumlaborwelt (lit.: space laboratory world) to discuss strategies for the production of space in urban surroundings on the basis of talks and round-table discussions, workshops, and film screenings. Proceeding from the raumlaborwelt in the KUB-Arena, the following questions will be focused on: What kind of visions for future urban spaces are presently being designed in architecture and art? What spaces for action are developed and generated? What is the relationship of these various approaches to the projective urban designs of modernity?