Tales of Resistance and Change

Group show, Artists from Argentina. The exhibition presents works by 12 contemporary Argentine artists and artist groups that conceive their socio-political environments as a field for reflection and action. Starting from a diversity of contexts, their works are to be understood as processes of research in which the present, traditions and recent history are combined. After the economic crisis of 2001 argentine artists started to question and examine their reality reactivating critical practices that had been inactive during the previous neoliberal period. 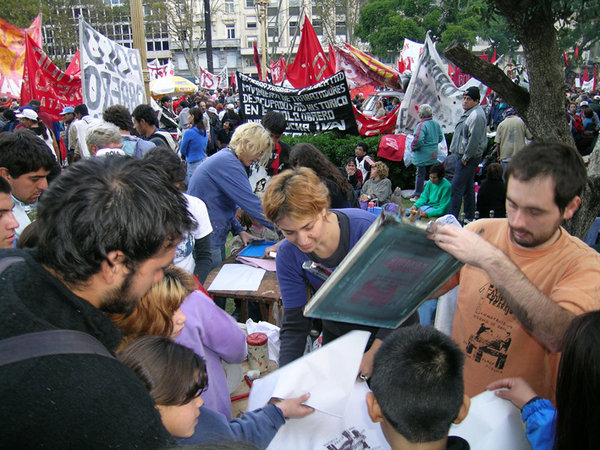 The Frankfurter Kunstverein and the Embassy of Argentina in Germany present the exhibition "Tales of Resistance and Change. Artists from Argentina" produced by the Organizing Committee for the participation of the Argentine Republic as Guest of Honour at the 2010 Frankfurt International Book Fair (COFRA).

The exhibition presents works by twelve contemporary Argentine artists and artist groups that conceive their socio-political environments as a field for reflection and action. Starting from a diversity of contexts, their works are to be understood as processes of research in which the present, traditions and recent history are combined. The geopolitical complexity of the country influences these productions in which urban and rural rhythms, immigrant and native heritage, transformations and political conflicts are perceived. "After the economic crisis of 2001–the curator, Rodrigo Alonso, points out– Argentine artists started to question and examine their reality reactivating critical practices that had been inactive during the previous neoliberal period. Some of them interacted with the new political militancy, others approached several communities and others created social inclusion projects with sectors of the population that had been particularly affected by the financial conflict".

One of the groups included in the exhibition, Eloísa Cartonera, is known for having created a publishing company based on the recycling of cardboard and the creative work of urban pickers (cartoneros). The books they publish include texts that important writers have donated in order to support the success of the initiative. Nido Project consists of the designer Mariana Cortés and a group of families that organized themselves with the idea of creating objects of design using an ancient Brazilian technique based on tying up waste pieces from cutting of cloth. The Swiss artist resident in Argentina, Gian Paolo Minelli, gave lessons on photography in the deprived neighbourhood 'Luis Piedrabuena' for approximately ten years, while he was doing a record of the place. Recently a group of students founded the cultural centre 'Piedrabuenarte' which changed the appearance of the area. "Tales of Resistance and Change. Artists from Argentina" shows the images of Minelli together with a series of self-portraits by the people of the neighbourhood.

Monica Milan's work represents another example of social inclusion. Since 2002, she has been working with a Paraguayan community of weavers. Their woven products inspire the artist's drawings, which include in them stories told by the workers about their ideas and routines. The artist Gabriel Baggio emphasizes the traditions of immigrants in Argentina by converging his Italian and Jewish origins in his performances. At the opening of the exhibition, he intends to incorporate part of the German heritage. For this purpose a local resident will teach him to cook some typical food.

Alessandra Sanguinetti's project "The Adventures of Guille and Belinda and the Enigmatic Meaning of their Dreams" (Las aventuras de Guille y Belinda y el enigmático significado de sus sueños), concentrates on rural rhythms. The artist follows the growing up of two women from their childhood up to their present youth, offering, at the same time, a portrait of rural life in Argentina. Sebastián Díaz Morales, on the other hand, focuses on Patagonia and on the industrial marks left as residues from the exploitation of petroleum resources, the main source of income for the region.

Tomás Saraceno sets out a metaphor of resistance through spherical and floating structures that are filled up with plants which grow out of their natural habitat. Sanguinetti, Díaz Morales and Saraceno are Argentine artists that have emigrated from the country of origin in order to develop their careers in other contexts. In this way, the exhibition deals with a variety of cultural and social situations by showing the production of artists, self-management groups and social inclusion projects that frequently go beyond ordinary art- production. It shows a succinct but significant prospect of the little-known artistic production of Argentina.

On the occasion of the exhibition different activities and conferences will be offered.